Now you can have your airy French cakes—and gluten-free, too 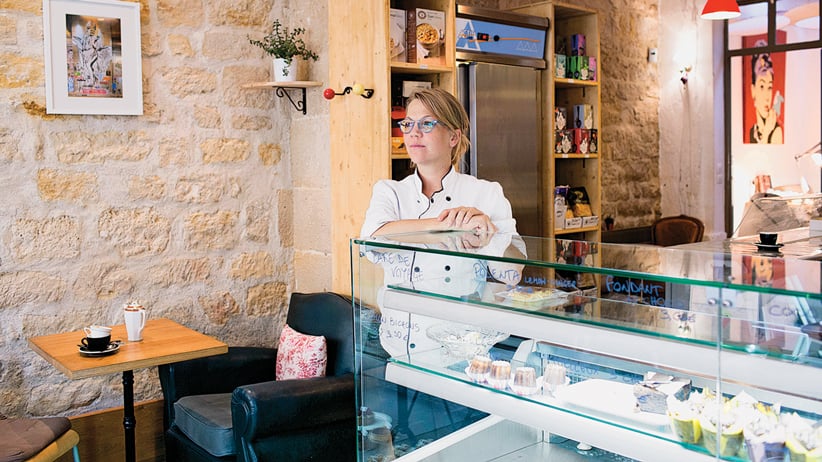 In Paris, where gluten is king, you must reserve a table for Sunday brunch at the gluten-free salon de thé Helmut Newcake. Here, proprietor and pastry chef Marie Tagliaferro makes traditional French pastries for those who can’t digest the protein that typically creates the molecular scaffold for the wheat-based baked goods for which France is known. On display in the glass case of the unassuming café are chocolate eclairs, fruit tarts, even two-tiered, cream-filled, chocolate-glazed religieuses.

Gluten-free hasn’t caught on in France as it has in North America, but you can buy fresh gluten-free bread at health food stores and there are gluten-free restaurants. The acclaimed baker Éric Kayser, famous for the goods he sells as far away as Russia and Hong Kong, makes gluten-free loaves, cookies and cakes. It’s challenging but possible to find flour combinations that mimic the qualities of these foods—tapioca and potato starch lighten a dough; millet offers a good crumb.

But Tagliaferro has managed to find the perfect mixture of unorthodox flours—such as corn, rice and sorghum—that mimic the elastic qualities of gluten that pastries depend on, making her not only a pioneer, but a creator of a whole new school of patisserie.

When she and her husband opened Helmut Newcake in the trendy Canal Saint-Martin district in 2011, they were the first such enterprise in the country. Since then, demand has been so strong, they’ve opened another location in a more ritzy area. That’s because no one else has been able to achieve Tagliaferro’s exact replicas of eclairs and tartelettes. “The big names in pastry have even come here to try them,” she said humbly. Tagliaferro wouldn’t divulge the names of the master bakers. “These are people who’ve not been able to do gluten-free. This is the unknown.”

Tagliaferro has wanted to be a baker ever since she was a child, but, while at pastry school, she was diagnosed with celiac disease. People with the condition are so sensitive to gluten, they can’t risk inhaling wheat particles, even from working with flour. She abandoned her chosen career for a while and moved to England with her husband. But she longed to eat the foods she grew up with. First, she tried to replicate a molten chocolate cake with gluten-free flours. “It’s very demanding,” she said. “There were a lot of failed attempts.” But soon, she was making goodies that even pleased family members who can eat wheat. “I told them to be intransigent with me. I asked if they’d eat it if they weren’t gluten-intolerant.” She nailed shortbread, then the light and fluffy choux pastry. Next came the café. Today, her eclairs are indistinguishable from their glutinous cousins.

This is a significant accomplishment. Gluten-free baking in Canada and the U.S. is, on the whole, well, not so good. “You can get anything gluten-free, and definitely, you won’t get the best,” said Marc Thuet, chef and owner of his eponymous Toronto bakeries. Thuet, who is from France, has done some gluten-free experimenting, but only sells coconut macaroons, which typically don’t call for gluten, and a brownie.

In North America, gluten-free muffins, doughnuts, cookies and even cupcakes are often grainy or dry or gummy. If they taste okay, chances are, they’re made with unpronounceable ingredients, such as carboxymethyl cellulose, listed on the Canadian baking company Dufﬂet’s new gluten-free tarts. Tagliaferro’s eclairs have none of this stuff. Even the famous gluten-free doughnuts from New York’s Babycakes are like sodden woolens in comparison to the light-as-air pastry of her choux.

Which is why, on a Sunday morning, people filed into Helmut Newcake and left with boxes packed with pastries. Americans make up about half of her business. But French customers come, too, because, until recently, a celiac diagnosis meant a lifetime without the treats that are central to the culture’s cuisine. She’s watched people cry when they taste an eclair for the first time in years. “It’s like they are having a Proust moment. It’s the pleasure of childhood memories.”

Now she’s trying to master a gluten-free croissant and baguette. If she’s able, she just may challenge the supremacy of gluten.