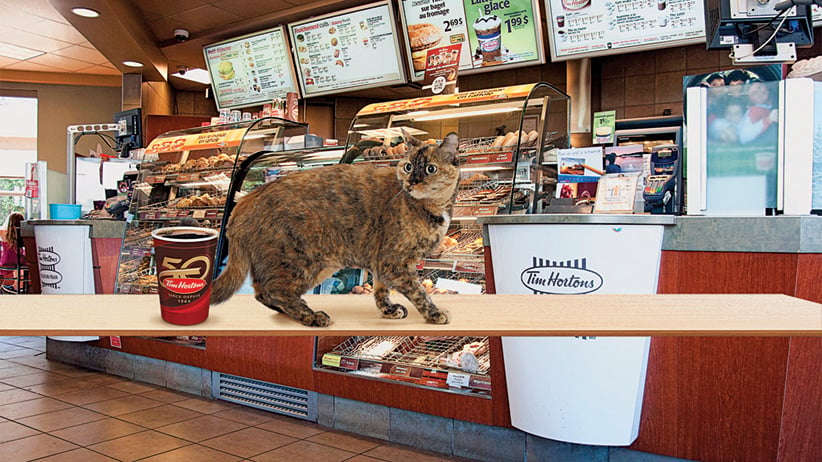 If you drink your coffee with two creams and two sugars, you might as well pour a mug of instant instead—or worse. (Illustration by Sarah MacKinnon.)

Have a seat, Canada. Are you comfortable? Good, that’s good.

I noticed you’ve been in a downward spiral since Burger King announced its plan to buy Tim Hortons for $12 billion—or roughly $1 for every Tims on Yonge Street in Toronto.

You’re worried about what the takeover will mean for your morning coffee—and for the corporation that is traditionally depicted in our media as adored, iconic and able to cure hepatitis with its doughnut glaze. (I’m paraphrasing.)

I’m here to help. This is a safe place, Canada. I want to see you get through this. Which is why I need you to listen to me closely. These words will be painful, but it’s important you hear them:

Tim Hortons is not a defining national institution. Rather, it is a chain of thousands of doughnut shops, several of which have working toilets.

Tim Hortons is not an indispensable part of the Canadian experience. Rather, it is a place that sells a breakfast sandwich that tastes like a dishcloth soaked in egg yolk and left out overnight on top of a radiator.

Tim Hortons is not an anti-Starbucks choice that makes you a more relatable politician or a more authentic Canadian. Rather, it is a great place to buy a muffin if you’ve always wondered what it would be like to eat blueberry air.

There is no shame in having been caught up in the Hortons hype. It happens. Just last week, a columnist in the Toronto Star likened Tim Hortons to a precious vase that’s about to be juggled by its new owner, a monkey. (I was so irate at this irresponsible journalism that I wrote a letter demanding the Star issue a retraction. Everyone knows monkeys juggle only coconuts.)

Meanwhile, the NDP’s Peggy Nash—who, by all accounts, is an actual person and not a fictional construct of The Onion—gravely warned of the potential consequences of the Tim Hortons brand “falling into foreign hands.”

Yes, imagine the consequences. Maybe these madcap foreign owners will go so far as to alter the sandwiches so they taste like . . . something. Preferably like sandwich, but, at this point, most of us have stopped being picky.

Am I getting through to you, Canada? While we’re on the topic of hard truths, there is something else that needs to be said.

Canada, you sure do like your double-double—or, as it is by law referred to in news reports, the “beloved double-double.” But here’s a newsflash for you: If you drink your coffee with two creams and two sugars, the quality of the coffee itself is of little consequence. You’d might as well pour a mug of instant coffee or sip the urine of a house cat mixed with a clump of dirt from your golf spikes. It’s all basically the same thing once you bombard it with sweet and dairy. You’re really just wasting your . . .

I see from your reaction that I’ve crossed a line. I hereby withdraw my defamatory comments about the double-double and kindly ask that you return that handful of my chest hair.

Sit back down, Canada. I want to tell you a story.

There is a Tims located a few blocks from where I live, which is to be expected, given that my house is not on the moon. This outlet happens to be close to a major intersection. Every morning, the lineup from the drive-through extends down to the edge of the street.

Confronted with this situation, a sensible driver would grasp the inherent hazard in blocking a thoroughfare and simply keep motoring on. Does anyone do this? Of course not.

Instead, everyone stops and idles. IN THE MIDDLE OF THE STREET. Other drivers come whipping around the corner and must execute Cannonball Run feats of two-wheeled stunt-driving to avoid ramming these pastry-seeking asshats. Horns honk. Tempers flare. And still no one moves. Sure, I got a debilitating case of whiplash, and the nice lady in the Subaru lost the use of her legs, but on the upside TIMBITS NOM NOM NOM.

My point is this, Canada: It’s fine to enjoy Tim Hortons. Some may even say it’s fine to be like my Dad and insist on the old-fashioned plain, the only doughnut that delivers both the flavour and texture of a memory foam mattress.

But don’t get weird about it, OK?