Older Canadians are flocking to the web. Are they liking what they find?

New survey research shows Canadians think the internet interrupts their lives. But that's not stopping them from going online.

Statistics about Canadian internet usage gathered from the 2016 General Social Survey were released Tuesday, and combined with new data from the Canadian Internet Registration Authority, provide a snapshot detailing who amongst us spends most time online, how we access the internet, and what we think about our connected lifestyles.

How many Canadians use the internet?

Almost all of us. According to the survey, 91 per cent of Canadians aged 15 or older accessed the internet at least a few times in the month leading up to the survey—that’s up from 86 per cent in 2013.

Who’s most likely to be online? 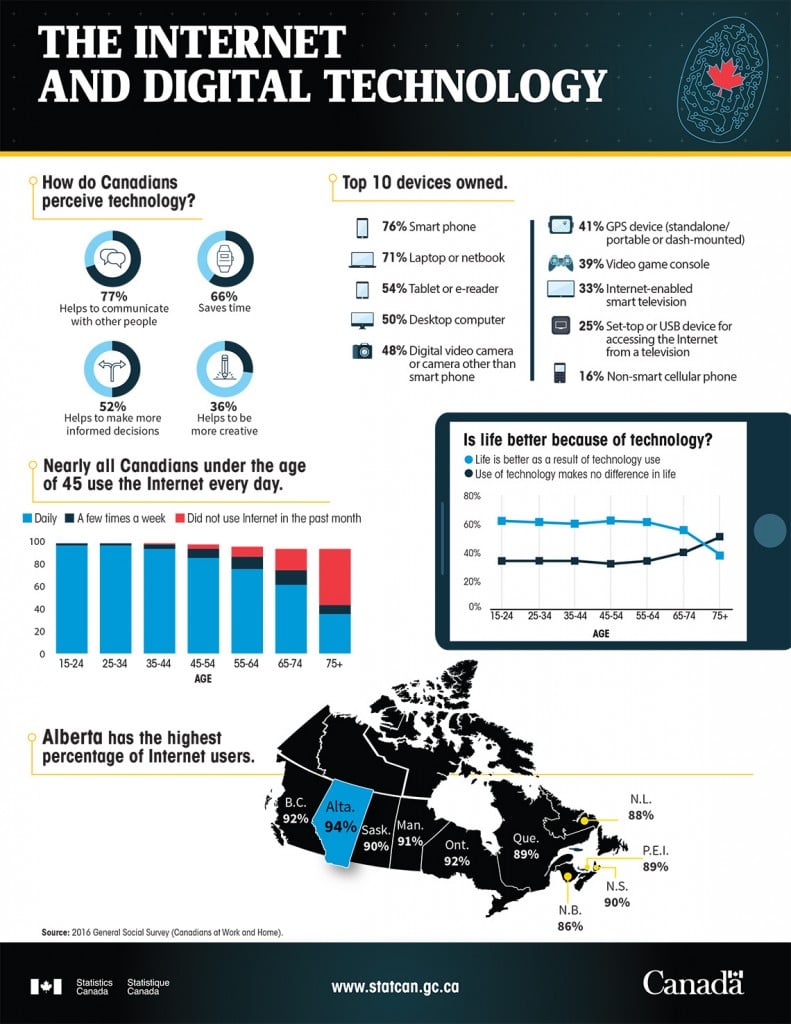 Where are Canada’s heaviest internet users?

Alberta, where a full 94 per cent of respondents said they used the internet. But Stats Can didn’t find much variance across the provinces (it didn’t gather data for the territories, where internet usage would likely be much lower). 92 per cent of Ontarians and B.C.-ers also said they used the internet, for example, while 90 per cent of those in Saskatchewan did. The lowest response rate was in Newfoundland and Labrador, but even that province boasts a high number of internet users, at 88 per cent of those polled.

How do Canadians go online?

Age again plays a factor. For young people, mobile devices are a must, says Stats Can. A whopping 94 per cent of respondents aged 15 to 44 said they owned a smartphone, while only 69 per cent of those aged 55 to 64 said the same. Only 18 per cent of Canada’s oldest cohort – 75 and up – said they had a smartphone. For its part, CIRA found that overall use of a mobile devices to go online in Canada has doubled since 2013. Back then, 32 per cent of respondents said they used a mobile device to access the internet; today, it’s 67 per cent. CIRA also found that 71 per cent of Canadians spend at least three to four hours online every day, and a lot of that time is apparently spent checking and answering email – 91 per cent of users say that takes up some part of their internet time. Another 68 per cent said they use the internet to do their banking, 61 per cent said they go online to check the news, and 57 per cent told CIRA they spend some of their time on social media.

RELATED: Why we need to regulate social media – before it’s too late

Canadians apparently like to use their tech toys to talk to one another: 77 per cent of GSS respondents over 15 said that technology helps them communicate. A healthy portion of Canadians – 66 per cent – also credit tech for saving them time, and about half (52 per cent) of us think technology helps us make informed decisions. Just over a third (36 per cent) of respondents said technology helped them be more creative. Once again, Stats Canada says, “Canadians in younger age groups were more likely to affirm these beliefs than their older counterparts.”

What do we dislike about technology?