Words on the wall inspired Women's 8

'Find a way,' read one message. 'Push for great.' On Thursday, eight Canadians followed their own advice to a silver medal

There’s a wall where Canada’s national women rowers train near the Fanshawe Lake in London, Ont., that says much about the grit that saw the women’s 8 plus cox earn Olympic silver medals at another lake outside another London on a Thursday afternoon. 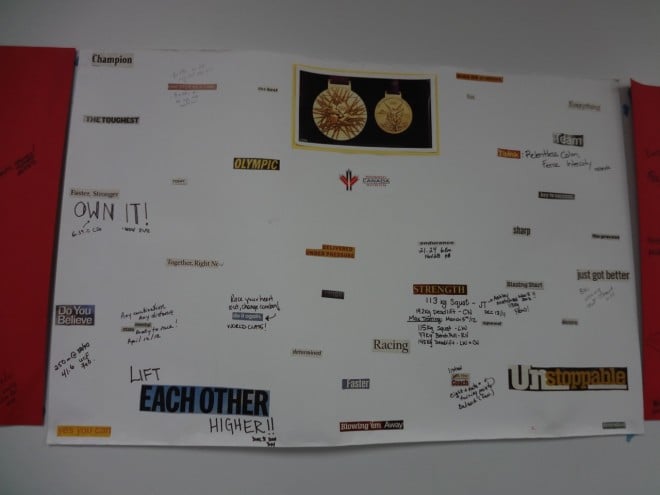 On it are taped three giant poster boards: two red sheets bordering a white one, like the Canadian flag. Over the course of their training, the women have drawn pictures and taped photos, but mostly they have written words and phrases. Words to inspire. Words to challenge. Words to motivate. Words like these: 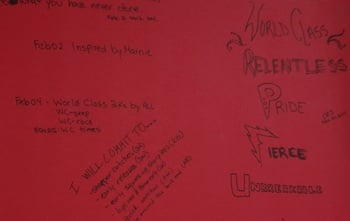 It’s not a wall of dreams, because dreams come unbidden. It’s a wall of tasks, and goals and earned ambitions. It’s personal and heartfelt; so much so that Lesley Thompson-Willie, the crew’s veteran cox, seemed uncomfortable when rower Darcy Marquardt proudly showed it off, as though I were reading the open pages of a diary.

But all those words and more were manifest on the racing course at Eton Dorney, in what was for many of the women on this team the last Olympics, the last chance for a medal, the last race.

They were favorites to medal, though, bluntly, not favourites to win. They are models of consistency, the only team that can predictably push an American crew that is so dominant in this sport it hasn’t lost a race since 2005.

But the Canadians are also a team that did not get a medal in Athens in 2004, and was knocked off the podium four years later in Beijing when a last-minute surge by the Dutch crew relegated them to fourth place.

So, there was much to consider here at Eton: that elusive podium; the Americans, most certainly; and the Dutch, who were due for a comeuppance.

It was a race of no surprises, but plenty of drama. The timing clock does not tell of the stress and the strain and the pain. It does not reveal how very badly Thompson-Willie wanted this for what she calls the best and strongest crew she’s coxed in her remarkable seven Olympic appearances. Or the words she spoke to the women in the heat of the race about believing in themselves, trusting in their abilities; about fire in the heart. Words from the wall at Fanshawe Lake.

The clock can record that the Dutch were pushing hard against the Canadians, but it cannot know the thoughts of Andréanne Morin, who was in the boat in Athens and who saw the Dutch surge past in Beijing. “When I knew they were third and they weren’t far back from us, I said I’m not letting this happen again. I thought of all the teammates that aren’t in this crew right now,” she says, “I was there to take that revenge, for them and for us.”

And so they did. Morin got her first silver medal, and Thompson-Willie got her fifth. And for both it is likely their last. In September they will put rowing behind them and both return to school. Thompson-Willie is a teacher-librarian in London, Ont. and Morin will return to law school in Montreal.

Rachelle Viinberg will now move back full time with her husband, Alex, in Toronto, and “start having children and a career.” In fact, most in this crew have likely finished racing, which explains why they were awash in tears; happy tears, mostly, but a few sad ones, too. 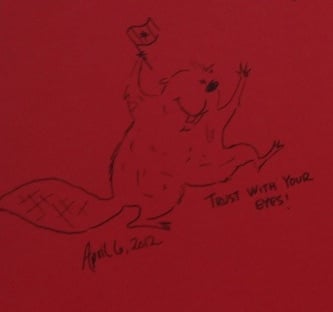 The next Olympic crew will be built around the young guns. Women like Natalie Mastracci, who drew a beaver on the board at Fanshaw Lake after the crew saw it watching from shore the first time they tested their Olympic boat. They took it for an omen. And Lauren Wilkinson, who shared the Olympics with her older brother, Mike Wilkinson, who rowed in the men’s 4 boat. After her race he gave her “the biggest hug in the world,” as she put it, before starting to sniffle. “It’s something that’s been a dream for both of us, and we worked so hard for this.”

So hard for this that Maclean’s used two pages of the Olympic preview issue to run a picture of Lauren Wilkinson’s hands, which are as blistered and callused as the rest of her is guileless and beautiful.

She showed me her hands on Thursday: “They look a lot better now, hey?”

I agreed, they did. And we shook on it. And her hand was rough and strong, and as eloquent in its way, as the words on the wall.