On diversity, Canadian media is throwing stones in a glass house

In defence of Hal Niedzviecki, top Canadian journalists crowd-funded an 'appropriation prize'—a gut punch for a person of colour in media 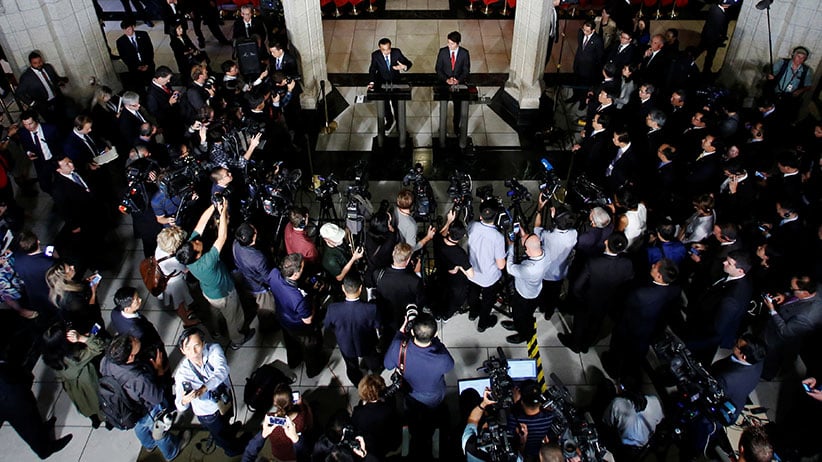 A Twitter timeline is a dangerous thing to scroll through at bedtime. On Thursday night, I watched former Maclean’s and National Post editor Ken Whyte pledge to seed a $1,500 “appropriation prize.” By the time I put down my phone, just three hours later, the pot was up to $3,500. The contributors: a selection of the editors and senior-most staffers and writers at some of the largest media organizations in Canada. They are all white.

The context: In the latest issue of Write, the magazine of the Writers’ Union of Canada, editor Hal Niedzviecki urged the white, middle-class people who make up most of published Canadian literature to “explore the lives of people who aren’t like you.” The piece, titled “Winning the appropriation prize,” was criticized on social media for denying and advocating cultural appropriation, and in relation to its inclusion in an issue focused on the work of Indigenous writers. Niedzviecki then resigned.

Once reported on, the incident brought forth what has become a predictable response from white Canadian media. Columns were written and scathing tweets were sent, to the effect that this was an affront to free speech and another sign of “the left” gone too far. And Whyte set out to organize his prize, presumably taking his inspiration from the title of Niedzviecki’s piece. Watching the names—some of the top names at the National Post, Rogers Media, and CBC—pledging their $100 or $500 to his cause, my stomach flipped. It was a reminder, once again, that too many white decision makers in Canadian media don’t seem to listen when people of colour and Indigenous people are talking.

I don’t imagine all these people hold the same opinions, of course. And Twitter is a flawed lens through which to judge anything. But watch what some of them regularly retweet, snark at and bemoan, and a worldview emerges. Free speech and critical thinking are under threat from those who, because of hurt feelings or ideological puritanism, just won’t hear it. Identity politics, political correctness, cultural appropriation and safe spaces are the four horsemen of this apocalypse.

Yet the same charges of rejecting disagreeable concepts out of hand and being purposely blind to nuance might apply to these people when they take on their pet peeves online.

Two participants in Thursday night’s proceedings are worth particular mention in this regard. The immediate instigation for Whyte’s effort was a tweet about the Niedzviecki incident from Jon Kay, editor of The Walrus—who, in fairness, didn’t contribute to the crowdfunding—calling that incident “sad and shameful.” He also retweeted a response to that missive that read, “So when are they going to exhume Harper Lee to castigate her for appropriating the experiences of African American men?” The response is just the kind of willful misunderstanding that suits the anti-PC crowd so well. Writing about another race or identity group is not necessarily itself cultural appropriation. Rather, it’s when those ideas are cut wholesale out of context and then presented as the taker’s own. And it’s particularly when the taker is rewarded for something the taken-from wouldn’t be. An “appropriation prize” is literally the ultimate example of this—giving a writer a reward specifically for taking ideas from Indigenous people and people of colour who are systematically prevented from profiting from their creations or cultures themselves.

I have, it must be said, a related and so far one-sided quarrel with Kay. At a Canadian Journalism Foundation event earlier this year, he shared, unprompted, some thoughts on diversity in media, saying in part: “It makes much less sense for the sons and daughters of immigrants, who have scrimped and saved … and came to Canada precisely so that their children can make a lot of money and have a secure life” to become journalists, as against the privileged with wealthy families or who are stopping through the profession on their way to a professional degree. (That section of his remarks is in full here).

He’s said this kind of thing before. Later on and in response, I addressed a question to Kay in particular: “What are you doing to actually hire those people? Because if the answer to this question is, ‘Immigrant parents don’t want their kids doing this risky thing,’ or ‘Immigrant kids don’t want to do this risky thing,’ then you’ve thrown up your hands and you’ve not actually solved the problem.” (The full question is here).

Another panelist, Rogers Publishing head Steve Maich, noted that the contracting of newsrooms was making this more difficult, and outlined some ways the company was working to address that. Kay did not answer, nor did he respond when I tweeted the same question to him a few weeks later as part of a thread commenting on one of his articles. While The Walrus has of course published stories by people of colour in his tenure, when Kay talks about media diversity it’s clear that he does not want to engage critically with the need to actively work to increase it—or at least, he won’t talk about it with me.

Andrew Coyne, meanwhile, told Whyte to count him in. Coyne, who is one of the more influential voices in Canadian journalism, has used his column inches to put forth the argument that in fact we are all diverse. “To elevate the relatively trivial differences between different groups over the profound differences between us can only be achieved by ascribing a false homogeneity to members of the same group… It is the very opposite of diversity,” he wrote. Coyne is undoubtedly a well-regarded writer of words—notice how much work “relatively trivial differences” is doing in that sentence, sweeping away centuries of institutional and systematic discrimination on the basis of race and gender and the continuing effects on such things as access to education, employment and power.

His gambit is to deny the whole thing: If we’re all diverse, then it doesn’t matter that white men like himself hold most of the positions of power and wealth in Canadian society, not to mention media, because they’re as different from each other as they are from say a black or brown woman. It’s a facile argument, one most of us didn’t buy when it was packaged as “everyone’s special in their own way” in grade school.

I wish I could quantify here the degree to which Canadian media is white. Then-Canadaland reporter Vicky Mochama once asked Canadian media outlets for diversity data. They were reluctant to cooperate, and did not opt instead to collect and publish the data themselves; it is, after all, harder to criticize organizations for what we can’t count. A J-Source attempt to gather self-reported diversity data about columnists produced incomplete results in part because some of those contacted were actively hostile to any such measure. So the best I can offer is that looking around newsrooms, the senior ranks are disproportionately white, and the people of colour present are more commonly found towards the bottom of the masthead and in strung-together contract positions or internships. The result of not having people in the building who understand specific identities and cultures is that your publication does not cover them often, if at all, and when it does it’s often in an insulting or stereotypical way.

Look, you can’t stretch your legs in Canadian media without kicking someone connected to you. Of those who opted to pledge their support for the appropriation prize online, Alison Uncles is editor-in-chief of this publication, and Maich runs the publishing arm at Rogers, which owns Maclean’s. (Both noted they were acting as individuals). Whyte himself was at Rogers until recently, while National Post editor-in-chief Anne Marie Owens and Coyne left Maclean’s a few years ago.

However permissive the workplace, it is always the case that to criticize or question the lack of diversity and pervasive whiteness of Canadian media is to risk alienating someone who may one day be a coworker or boss. To be clear, and for what it’s worth, I’ve never had it so much as hinted to me by those I work with or for that I should be less vocal about these topics. But faced with an industry whose power players often actively reject or else pay lip service to diversity, both in the workforce and the subjects covered, I’m left to wonder how often I can bring it up before it becomes my label—“that brown guy who keeps whining that we’re not diverse enough.” (Or in a more egregious example, think of Desmond Cole, who wrote about race too often, according to the Toronto Star’s publisher).

Told there’s nothing wrong, or that things aren’t as bad as we make them seem, we press our case again and again. With every passing insistence, white decision-makers are increasingly able to dismiss us as shrill and one-noted, muting us with calls for “civil discussion” in rooms reserved for higher-level, disproportionately white staff. Already, that repeated denial of what we see in our lives— “gas-lighting”—has a chilling effect of its own, teaching us that we best not talk about these things because we won’t be believed or taken seriously.

So imagine how discouraging it is to see the decision-makers who cannot find money in the newsroom for more diversity gladly offer to give their own for a cause that people of colour and Indigenous people have pointed out actively devalues us.

Of course, I don’t expect the people who pitched in to Whyte’s effort to pay for a permanent reporter position out of their own pockets, though the total they’ve pledged would have covered a month of my first full-time salary. And it’s true that “not quickly enough” will always be my view of how fast newsrooms must work to diversify. But the symbolism of white Canadian media decision-makers sponsoring an appropriation prize via a Thursday night Twitter thread—that’s something people of colour and Indigenous people in the industry could have done without.

In an article that touches on appropriation I cannot fail to mention the influence that the thoughts of people of colour, and in particular the tweets of Vicky Mochama, Navneet Alang and Scaachi Koul, have had on my thinking on this issue.