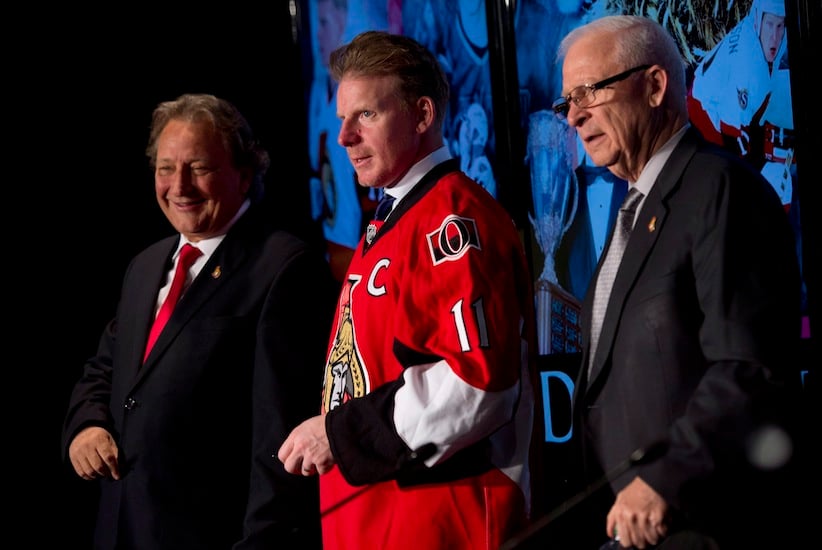 OTTAWA — An emotionally trying year for the Ottawa Senators has taken another difficult turn.

The organization announced Thursday afternoon that owner Eugene Melnyk is in urgent need of a liver transplant and is making a public plea to find a live donor.

In a statement released earlier in the day the Senators announced that Melnyk, 55, had been admitted to hospital three weeks ago as a result of the onset of liver-related complications. He had been battling health issues as far back as January.

Members of Melnyk’s family have undergone extensive testing, but to this point no one has been a match.

Melnyk has been on the organ donation list, but to this point no match has been found.

“Eugene’s health has deteriorated and he’s now in urgent need of a transplant,” said Leeder. “Time is of the essence.

Melnyk was reluctant to make a public plea and needed to be convinced by friends and family as the situation became critical.

While the initial plea is to find a match for Melnyk, the Senators said they hope to raise awareness for the need of live organ donation to others in similar situations.

“Everybody has the ability to make a public plea, it’s just Eugene has a little different platform,” said Leeder. “At this stage we’re going to use every opportunity we have to find a liver donation.”

Melnyk purchased the Senators in 2003 and holds the titles of governor and chairman of the team as the sole owner of the organization.

News of Melnyk’s health crisis comes on the heels of the death of assistant coach Mark Reeds on April 14 and general manager Bryan Murray’s ongoing battle with colon cancer.

“It’s been a really difficult year from that perspective,” said Leeder. “People pull together and we’ve seen the determination from our team and Bryan gives us strength and in this case, we found out about this late (Wednesday) night, and our team has rallied around it internally and everybody is working hard to find a solution. I think we’ll find strength from each other.”

Potential donors can be anyone between the ages of 18-55 in good physical health. First steps include filling out forms followed by a screening process.

“The liver is a highly resilient organ that can regenerate itself within 90-120 days and return back to its normal size,” said Dr. Atul Humar, the Medical Director of the University Health Network’s Multi-Organ Transplant Program. “Any healthy adult between the ages of 18-55 years could be a potential live liver donor. To date, over 600 live liver donor transplants have been performed at the University Health Network. All donors have returned to normal lives with no restrictions.”