Pan Am Games, weather stations: If you build it, they will come

They’re calling them the Toronto 2015 Pan Am and Parapan Games, but with 30 venues—including 10 new builds—sprinkled across 16 municipalities it promises to be more of a provincial event. Even if Ontarians haven’t yet caught the fever, it will be hard to ignore. Running from July 10-26, and then Aug. 7-15 for the Parapans, the Games will have an outsized footprint, attracting 10,000 athletes, coaches and officials, an estimated 1.4 million spectators and temporarily restricting 283 km of traffic lanes—all at a budgeted price of $2.5 billion. Here is where some of that money is going. 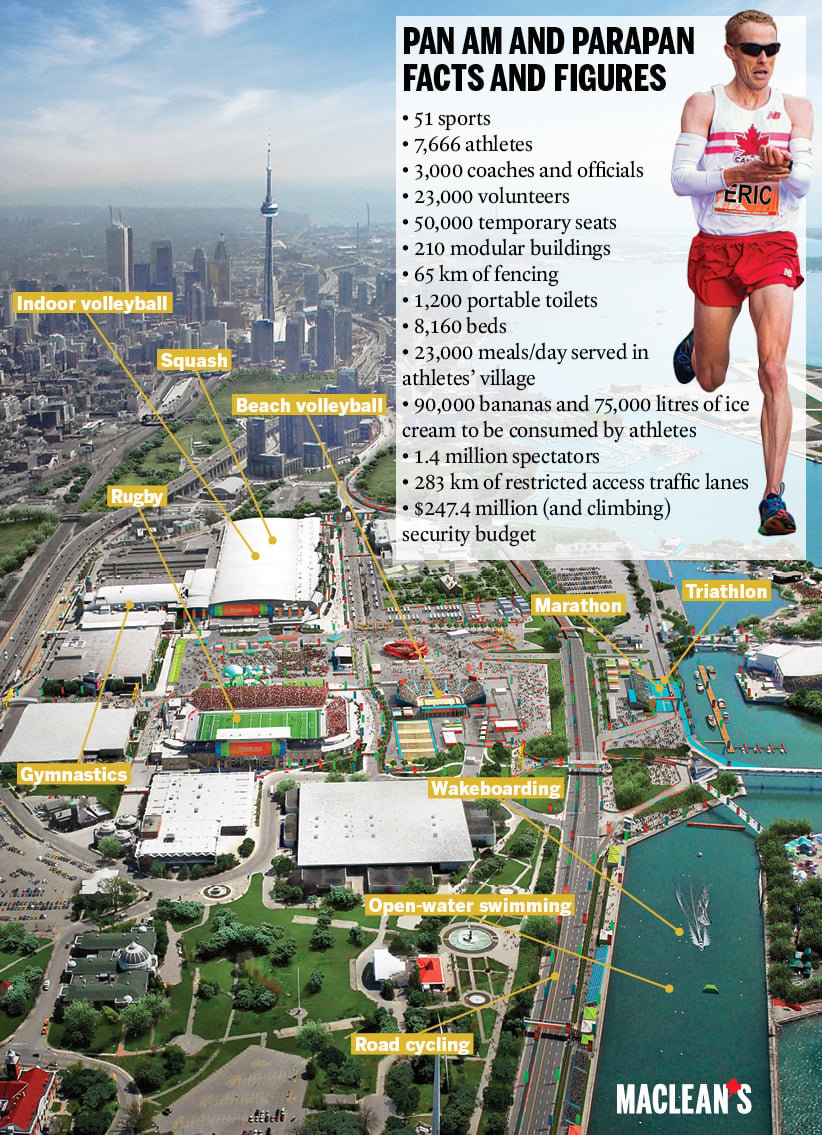 Toronto’s venerable Canadian National Exhibition grounds are slated for a major makeover as they host 14 sports, including rugby, gymnastics and racquetball, as well as the bulk of the Games’ cultural festivities. The most impressive change promises to be the temporary five-court beach volleyball venue. It will take 185 dump trucks and 50,000 cubic feet of sand, along with lights, changing areas, food kiosks and a 5,000-seat grandstand to convert a parking lot into a desert outpost.

Canadians can probably name one squash player—former world No. 1 Jonathon Power, now retired—but the sport doesn’t have much of a domestic following. Games organizers and Squash Canada are hoping to change that by importing an all-glass, portable court. Frosted light blue on the inside—so players don’t get distracted—the court allows spectators to watch, and television to shoot, in the round. It takes a crew of seven people three to four days to set up, and can be configured for singles and doubles. The court is already on the road in Canada (travelling in a 53-foot semi trailer), drumming up interest for the Pan Ams, and hopes for the sport’s inclusion at the 2024 Olympics.

Back in 2004, Canadian men won a wheelchair basketball gold at the Athens Paralympics. But in recent years the team ’s performance has dropped off, and they failed to even qualify for the 2014 World Championships. Hopes are high then, that the new Wheelchair Basketball Academy—part of the Pan Am pool and field house complex in Scarborough—will spark a renaissance. The facility offers ready court access and a permanent training facility for as many as 36 male and female wheelchair athletes. Every part of the building, which is also used by other high-performance athletes and the public, is accessible. And there are some special features like an extra-wide treadmill for wheelchairs, built right into the floor. “It’s a state-of-the-art facility,” raves Mike Frogley, the academy director. “And it’s all been built with the mindset of inclusion.”

Part of the Games’ legacy will be three more Olympic-sized swimming pools in the Greater Toronto Area. In order to maximize their use post-competition, one of the two pools at the main $205-million Scarborough Aquatics venue, and another in Markham’s new $86-million facility, home to water polo, have been fitted with movable floors. At the touch of a button, bottom depth can be adjusted anywhere between 3.5 metres—suitable for synchro swimming—to 0.5 metres, perfect for kids, for the entire pool, or just half of it. The water is simply pumped underneath the floor, where it continues to circulate and be heated. The whole process takes just a couple of minutes.

Environment Canada is planning to add 55 new surface weather stations to its existing network around the Greater Toronto Area, and provide pinpoint forecasts for all the outdoor events, updating them every 10 minutes. The weather stations will be positioned near the venues, and in lines radiating out from Lake Ontario in order to detect the leading edge of water-cooled air as it moves inland—a major trigger of severe summer thunderstorms. The federal agency will also have three mobile stations on the roads around the city to collect data in places like the downtown core, and two weather buoys off the Toronto Islands to track conditions for the sailing events.

There will also be a new high-tech lightning-mapping array (LMA) with 14 ground stations connected to a central computer. The solar-powered units search for the high-frequency electrical signals generated by lightning flashes and then use GPS data to map them in fine detail as they branch—sometimes for kilometres—across the sky. The whole idea is to provide Games organizers detailed and early warning of approaching storms so that athletes, spectators and volunteers can stay safe.