Approximately seven out of every 1,000 babies in Canada are born still. Here's why keeping pictures of those babies can help ease parents' sense of loss. 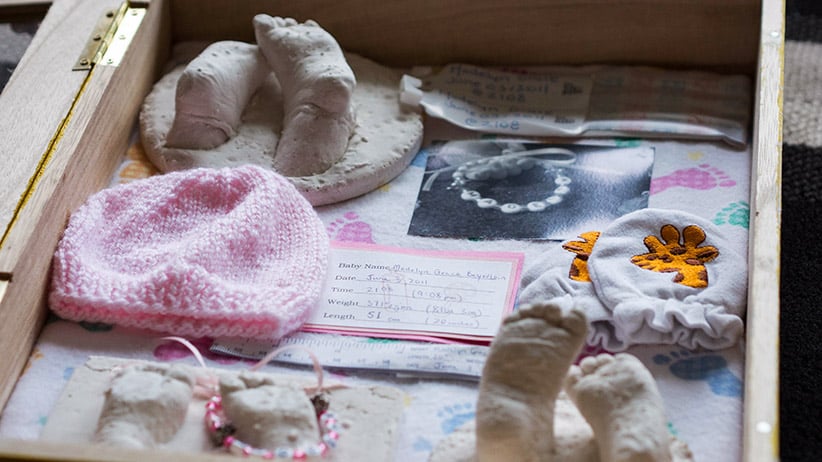 Madelyn’s memory box opened, containing molds of her feet, the hat, mittens and receiving blanket she wore after her birth, a photo from the hospital and other small mementos (Seema Marwaha)

Krista Beyerlein was more than prepared for her first pregnancy. She attended numerous prenatal appointments and ultrasounds, carefully following her doctor’s advice. At 36 weeks, a car seat was installed, the nursery was built and her hospital bag was packed. The educational assistant and her husband Harold, based in Georgetown, Ont., were anxiously awaiting the arrival of their baby.

But things didn’t go as planned.

At her 36-week pre-delivery ultrasound, she was told her daughter’s heart had stopped. For unknown reasons, she had died in the womb.

“I was in shock. I had to be immediately admitted to the bereavement room on the maternity ward,” said Beyerlein, now 34. After her husband Harold arrived, the medical team made plans to induce labour. Even six years later, she recalls the distressing realization that she would give birth, but not be a mother. That she would leave the hospital without a child. “Emotions I’ve never felt before surfaced. At this point, we wanted nothing to do with the baby. It was too hard. They brought in a radio so we didn’t have to listen to other babies being born crying.”

Laurie Soares, a nurse and bereavement specialist, helped care for the Beyerleins from the moment they arrived at the maternity ward at Credit Valley Hospital in nearby Mississauga. She stayed by their side, a comforting presence and pillar of support. But her urging to name their stillborn child, and bond with her after birth, was not something they expected. Soares even recommended taking family portraits after the delivery—a Victorian practice experiencing a resurgence in stillbirth.

The parents were initially taken aback by her suggestion to take photos amid their grief. “Harold was so angry,” says Soares. “I remember telling him we do pictures. He said to me, ‘You want me to photograph my dead baby?’ I said, ‘You are a father. You can have no memories or I can help you build memories of your daughter.’ ”

Approximately seven out of every 1,000 babies in Canada are born still. The loss is often devastating for parents who can suffer complex, pathological or disenfranchised grief. Several research studies, including a 2014 study of 104 parents published in BMC Psychology, have advised parents photograph stillborn babies and save the pictures as mementos that can help ease a sense of loss. Advocates say the practice validates a stillborn child’s existence. 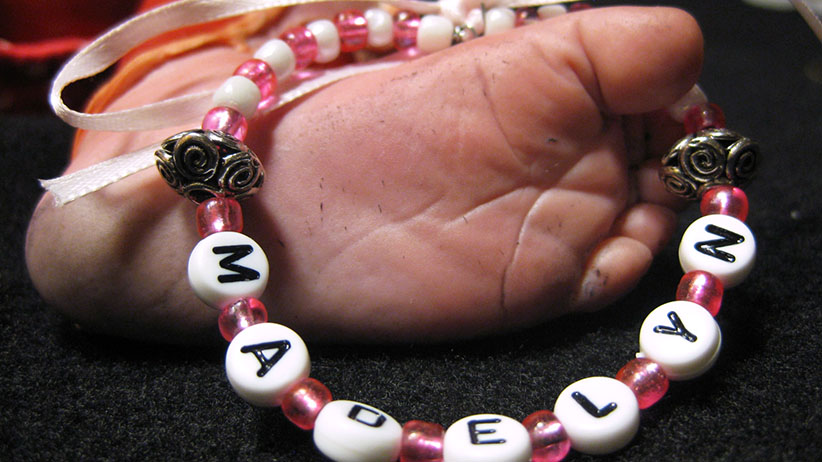 A portrait of Madelyn’s foot taken by the Credit Valley Hospital nurses on June 4, 2011. (Krista Beyerlein)

Memento mori is the practice of reflection on mortality, and pre-dates Victorian England. But the popularization of photography in the 19th century introduced portraiture of the dead as a means of memorial. With Victorian nurseries plagued by fatal diseases, and the infant mortality rate estimated to be over 150 per 1,000 births, families often experienced multiple neonatal and child deaths. Photos became a means for parents to keep a permanent likeness of their baby. It was common practice for snapshots to be taken of dead infants just as other families would have taken photographs in life.

But as healthcare improved, so did the life expectancy of children. Birthing moved out of homes and became more institutionalized, as did the grieving process. The demand for death photography not only diminished, it became viewed as morbid and culturally taboo.

“Just a few years ago, we didn’t let parents even see their baby,” says Soares. “We would whisk them out as soon as possible. There was this mentality that if they didn’t see them, then they wouldn’t grow attached and it wouldn’t hurt as much. We would literally say, ‘On to the next one.’ ” It was a cold practice that never felt right to Soares.

As evidence started to suggest that parental bonding with a stillborn child can actually help parents mourn, frontline workers like Soares began to change the way they approached stillbirth. Inspired by the American Resolve Through Sharing (RTS) bereavement training program, Soares started an infant loss program at Credit Valley Hospital in 2007.

Bereavement photography programs are grounded in a changing perspective on grief, says Toronto-based researcher Sara Martel. Rather than get over those who have died, we seek to incorporate them into our own lives. “If someone lived a long life, people around you shared their story. But often no one met these stillborn babies other than their parents,” she says. “How do you incorporate them into your life when they don’t exist to anyone else? Both the experience of taking photos and the photos themselves can symbolize this existence.”

After 35 excruciating hours of labour, Beyerlein gave birth to Madelyn Grace on June 3, 2011. Emotionally and physically exhausted, Beyerlein waited until the following day to meet her. “I cried a lot when I held her for the first time,” she says. “I wanted to know what her nose looked like and what her ears looked like. That was our only chance. She was beautiful.”

The nurses then started taking pictures, first of Madelyn’s hands. Then her feet. Then came the portraits of the little girl being held by dad and mom. After spending the day with Madelyn, the Beyerleins were discharged. They left with a carefully constructed care package that included the photos on a CD, molds of her feet, and other mementos. “It was the hardest thing I ever had to do and the best thing I’ve ever done. The photos and trinkets mean the world to us now,” says Beyerlein.

But pioneer programs like Soares’s are still rare. Michelle LaFontaine, the program manager for Ontario’s Pregnancy and Infant Loss (PAIL) network, says many Canadian hospitals lack funding for counselling services. Some even discourage families from holding or bathing their child, let alone taking photos. “Often parents get sent home from the hospital with nothing. They have no idea where to go for support. They end up googling ‘my baby died’ to find who else they can talk to,” says LaFontaine. 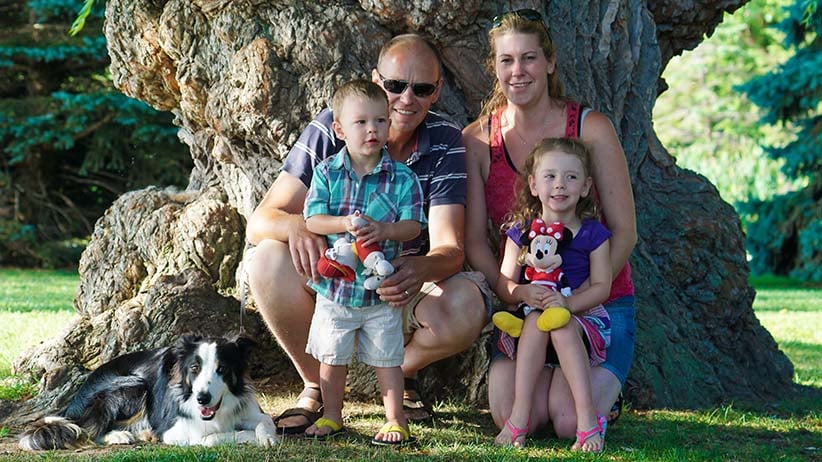 A 2016 Beyerlein family photo with Harold, Krista, their two young children and their dog. (Krista Beyerlein)

Ontario offered no dedicated funding for infant loss until 2015, when the provincial legislature passed Bill 141—known as the pregnancy and infant loss awareness bill. It was championed by Liberal MPP Mike Colle after his daughter, Bianca, went through two still births and an 18-week pregnancy loss after the birth of her first child. After one of her losses, she was sent home with nothing more than a note to follow up with her doctor in two months.

“It became apparent there is a real pattern of neglect,” says Colle. “It starts with a cultural stigma—women who went through it were not allowed to talk about it. And it’s resulted in a real black hole in health care in this area.”

Bill 141 was the first of its kind in Canada, but it only provides $1 million in additional funding to conduct new research and train health-care workers in techniques like bereavement photography.

Despite the bill, funding still remains a challenge in many community hospitals. Soares’s program was initially funded by bake sales and money raised from past bereaved parents. The program has been able to expand to serve more parents and extend beyond the maternity ward in large part due to generous donations from the community.*

After the Beyerleins left the hospital, they began the painful process of organizing a funeral service for baby Madelyn. They picked out an infant-sized casket and a headstone. They asked close family and the hospital nurses who attended the ceremony to wear bright colours so the day offered something other than pure sadness. They also planted a butterfly bush at her grave site, and released monarch butterflies into the wild at her service, hoping the monarchs might return to her grave site each year.

“Everything was a blur,” Beyerlein recalls. “Going back now, we appreciate every decision we made. It was the best thing to spend the day with her, name her, and take photos. We started to realize this at her funeral service.”

Beyerlein has gone on to have two other children. She wants them to know they had an older sister. Photos and other mementos of Madelyn are on display on a shelf in the family kitchen.

“The initial thought from people might be that these photos are morbid,” she says. “But that’s just an instant reaction. Step back and think about it. You don’t have to look at the pictures if you don’t want to. But if you don’t have them, you would regret it. She will always be my child.”

Seema Marwaha is a Toronto-based internal medicine physician, journalist and health communications researcher. She is also a Munk School Fellow in Global Journalism at the University of Toronto.

Editor’s Note, May 19, 2017: Since we published this story, we’ve learned that Trillium Health Partners, which includes Credit Valley Hospital, received a large community donation for its bereavement program.