Partisan to the very end—and beyond

The once sombre death notice is now seen as a way for the recently deceased to make one final political appeal to the living: who to vote for, or against. 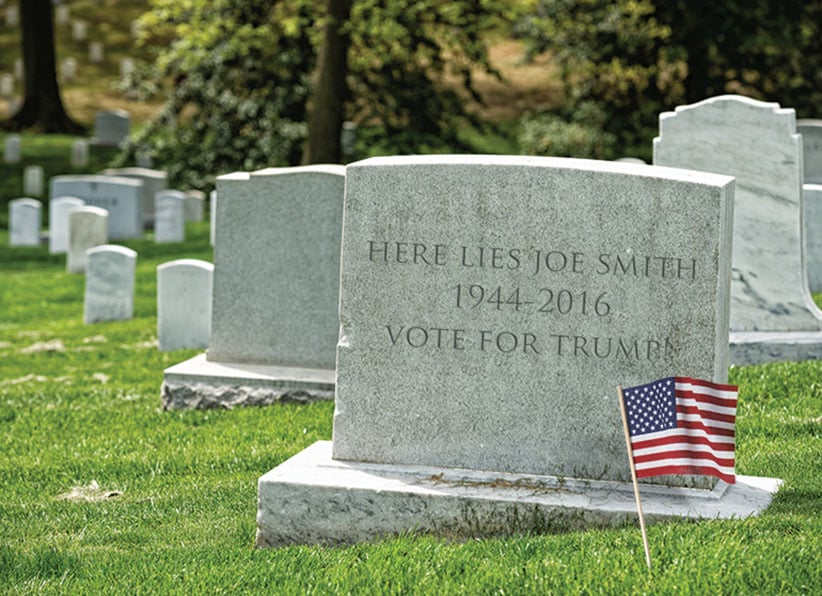 In the middle of last fall’s federal election, the quirky death notice of Catherine Finn caught the country’s attention. Amid the Torontonian’s literary opinions—“She always believed Margaret Atwood was vastly overrated and Margaret Laurence equally underrated”—was a request: “In lieu of donations, Catherine would want you to do everything you can to drive Stephen Harper from office, right out of the country and into the deep blue sea if possible.”

Finn was part of a new trend hitting the formulaic death-notice industry (unlike obituaries, written by news organizations, such notices are created by the deceased’s family who pay for the tribute to run in a newspaper). In a share-everything culture increasingly wracked by divisive politics, the dearly departed are now offering one last pearl of wisdom: how to vote.

Once a paragraph that tersely recorded birth, marriage and death, the death notice has morphed in recent years into a longer, sometimes excruciatingly detailed ode to a beloved’s life, including detailed resumé and favoured sports teams.

While electoral requests are still rare in Canada, they are increasingly common south of the border, especially as the quest for the White House heats up. It’s no surprise that the most controversial Democratic and Republican candidates have attracted the most beyond-the-grave requests.

In late January, Pittsburgh chiropractor Jeffrey Cohen died. In a humorous ode to a rare “Jewish cowboy,” his son, Jason Brown, wrote this last request: “Jeffrey would ask that in lieu of flowers, please do not vote for Donald Trump.” On the flip side, Virginia’s Ernest Overbey’s wish was, “please vote for Donald Trump.” Upon hearing of his plea, the bombastic politician was only too happy to chime in with his thanks (incorrectly spelling his name as Earnest in the process), which itself has been retweeted more than a thousand times.

While Trump has garnered a number of “anyone but” requests, a rough online count shows that he’s a distant second to the polarizing Hillary Clinton is that category. When Larry Upright of Kannapolis, N.C., died in April 2015, family of the “former Shriner of the Year at Cabarrus Shrine Club” asked, “The family respectfully asks that you do not vote for Hillary Clinton in 2016. R.I.P. Grandaddy.” A few months late, Richard Buckman of Beebe, Ark., echoed the anti-Hillary sentiment. As did Elaine Fydrych, a registered Democrat from Runnemede, N.J.

While most politely ask for friends and family to not vote for someone, others are significantly less courteous, and more verbose in their reasoning. In early February, the notice for Annette Garner, 84, of Jacksonville, Fla., stated bluntly, “She finally gave up her fight reporting that while Obamacare didn’t kill her, another Clinton in the White House probably would so she was getting out while she still could. In lieu of flowers, she respectfully requests that you vote for anyone other than Hillary.”

As the U.S. election campaign continues, such requests are garnering increasing amounts of attention for the grieving relatives. “We got some sweet responses and we got some nasty responses,” Upright’s wife, Colleen told the Associated Press of her husband’s anti-Hillary request. “But we’re Uprights, and that just rolls off our backs.”