Passive, aggressive and pissed off: Our culture of perpetual outrage

Because history is doomed to repeat itself, we can expect 2015 to offer up more moronic expressions of outrage, writes Emma Teitel. 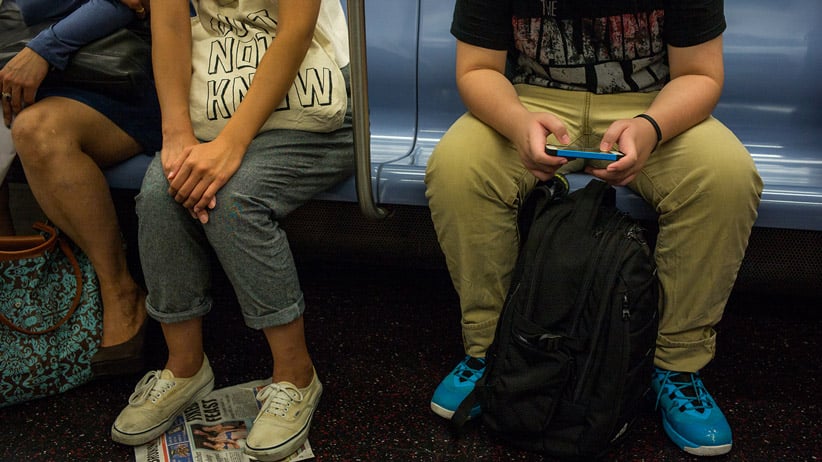 What is more likely? That the sun will rise tomorrow or that someone, somewhere, will launch an online campaign decrying anything and everything? It may be an impossible question to answer, because ours is an age of unending offence. For proof, one need only look at Slate magazine, which drew up a calendar called the Year of Outrage 2014, documenting 365 things people complained about online, one for every day. Some are serious: torture, police brutality, political corruption. Others—like the public flogging of a NASA scientist who wore a shirt emblazoned with bikini-clad women, or the allegation by a right-wing website that Lena Dunham’s childhood experience playing doctor amounted to molestation—are just moronic.

Because history is doomed to repeat itself, we can expect 2015 to offer up expressions of outrage twice as idiotic. In fact, it already has. Take, as a prime example, the current backlash against what annoyed transit riders have dubbed “man-spreading”: the supposed tendency among men to sit with their legs splayed on the bus or subway, taking up twice as much space as they need—the implication being that they are so well-endowed, they must reserve an entire seat for their testicles alone.

In December, New York’s Metropolitan Transit Authority launched a campaign against the alleged practice, complete with posters that depict a red stick figure spreading out on a subway car alongside a caption that reads, “Dude . . . stop the spread, please. It’s a space issue.” Since then, the conflict has erupted online. Today, one can find numerous Tumblr accounts dedicated to man-spreading that feature candid photos of men in the act. In Toronto, amazingly enough, men’s-rights activists have argued that man-spreading is a biological necessity; sitting with legs closed, they contend, might damage the testes. It may be the first time in history that a men’s organization has accused a feminist cause of literally busting its balls.

In January, Elizabeth Plank, a senior editor at the U.S.-based news site Mic, conducted her own experiment: She and a male colleague spread out on the New York subway and concluded that other transit riders were far more surprised and annoyed to see a woman occupying two seats than they were to see a man doing the same thing. Plank argues that this experiment, which has since gone viral on YouTube, reveals it is easier to take up space if you are in possession of a penis. It also proves, however, that for people like Plank, it is preferable to make a point than to solve a problem.

I take public transit twice a day every day during the workweek and, if I encounter a person—man, woman or child—who is occupying more space than necessary, I simply ask the person, politely, to move over and, nine times out of 10, he or she complies. Unless a transit rider is high, drunk or dead, he will most likely make room for you when asked.

But you’ll never know unless you ask, and it’s the asking, in real time, in real life—not the posting or tweeting—that seems to be a problem for this increasingly offended, yet complacent world. Indeed, what’s unprecedented about the man-spreading uproar isn’t that there are people on this Earth who have the gall to take up more public space than they need, but that the parties inconvenienced by this behaviour would rather fume in silence and take discreet Instagram photos of the offending seat hoggers than ask the hoggers to move over. The so-called man-spreading epidemic is not a problem borne of male privilege. It’s one borne of timidity—and a passive-aggressive attitude aided and abetted by social media. 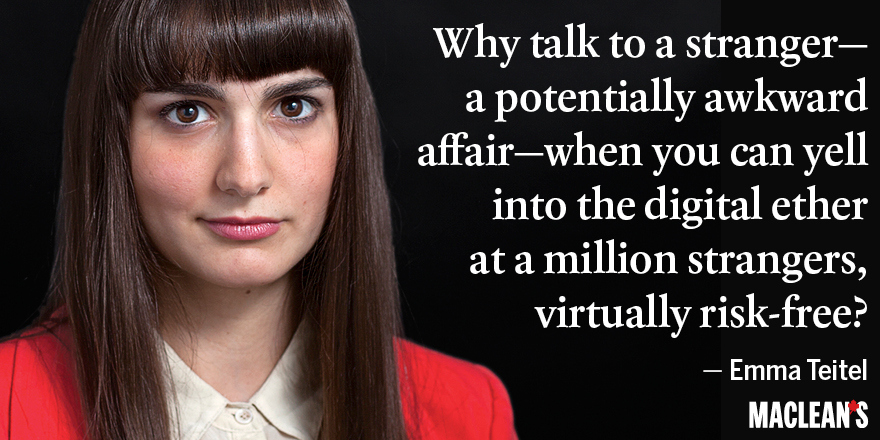 After all, why talk to a stranger—a potentially awkward affair—when you can yell into the digital ether at a million strangers, virtually risk-free? Why take a chance at eliciting stares and snickers from the corporeal beings in your midst, when you know that your grievance will be met with nothing but praise and support by your boosters on the Internet? Conservative pundits have labelled the man-spreading affair a case of politically correct feminism gone wild. But I think it’s more a case of stunted social graces. Despite social media’s reputation as the cyberbullying, revenge-porn hub of the universe, it is also, for many users, all gain and no pain. It is a narcissistic echo chamber, in which validation comes free of charge—or, almost free of charge; a seat on the subway is a small price to pay for the righteous indignation of hundreds of sympathetic strangers.

In light of this, it would be interesting to learn how often people take their Twitter and Facebook grievances not to their followers, but to their real-life foes. My guess is that the number is exceedingly low. Maybe we’re in need of a new word to complement “slacktivism,” the Internet-era portmanteau of “slacker” and “activism.” Call it “sloutrage,” a behaviour exhibited by people who are perfectly content to scream at the top of their lungs into a virtual room of millions, but cower at the mere thought of face-to-face confrontation with a single, splay-legged stranger.