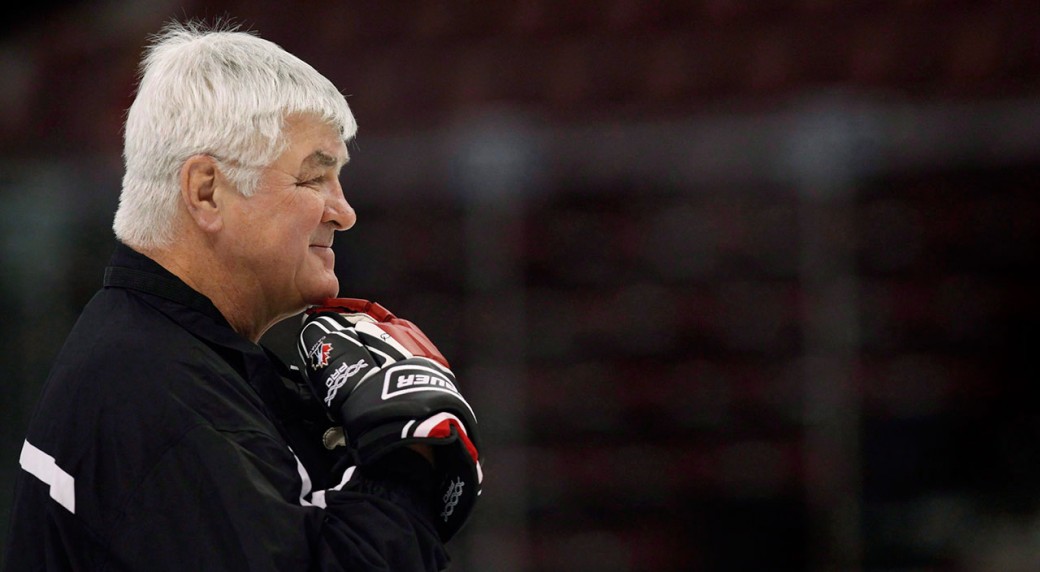 Pat Quinn—who spent more than four decades in the National Hockey League as a player, head coach and general manager and who led Team Canada to three gold medals in three international competitions—died at 71 on Monday. Here, in an excerpt from his piece for Sportsnet, Gare Joyce remembers one of the biggest hearts in hockey. The full story is here.

Many people will be summoning fading memories and telling bygone stories about Pat Quinn with the news of his death today. What first came to mind for me, though, was the last time we talked.

I called Quinn last January in the run-up to the Winter Olympics in Sochi. And I was calling him to talk about some volunteer work he had done on behalf of Hockey Canada: His stints with the Canadian Olympic teams in 2002 and 2006, the national under-18 team in 2008 and the under-20s in 2009.

Quinn wasn’t drawing paycheques of any sort at that point. He was simply enjoying his full status as a Grand Old Man of the Game. He had spent the better part of a half century in the pro game. His career dated back to the Tulsa Oilers in the mid-’60s when he was a bruising if unsubtle defenceman.

Quinn was the definitive journeyman, but he stood out among them—he towered over most physically and all intellectually, having completed his law degree while toiling away in the game. It was no surprise that he would wind up as a coach and executive in the league—just maybe a surprise how successful he’d become.

Quinn won the Jack Adams Award with Philadelphia in 1980 and with Vancouver in 1992. In those two cities he coached teams to Stanley Cup finals. He was somewhat less successful in Los Angeles, Toronto and most recently Edmonton, but still managed to work 1,400 games behind NHL benches, fifth on the NHL’s all-time list. He also served as a GM in Vancouver and Toronto, though he seemed to take on those positions because, as coach, it gave him the opportunity to report to the best-qualified man: himself.

Though he never hoisted the Stanley Cup as a player or coach or GM, Quinn cemented his reputation as a winner when he stood behind and tapped the shoulders of the Canadian team that won gold at the 2002 Winter Olympics. And when I talked to him last winter he was fielding calls about that team in Salt Lake City. That was where our conversation started.

I asked him what a coach of an Olympic team had to do and he threw me a curve by talking almost exclusively about what not to do.

“If you try to do too much, you just risk confusing the players,” he said. “It’s not like coaching players at a different level. You have to trust guys who are picked for an Olympic team. They’re not just the most skilled players in the world, they’re some of the most intelligent players in the world, too. They see things and understand them. They know what to do in situations and can process things on the ice so quickly.”

First and foremost, he understood that, as a coach, he had to put ego aside. A team isn’t particularly a coach’s at any time, but any sense of possession in an event like the Olympics is even more counterproductive.

Taking this down it occurred to me that I had heard this before. It turned out that he wasn’t reheating old war stories about the run in 2002. No, it evoked a conversation I had with him when he took the Leafs coaching job in ’98.

“When I was first called up to the Leafs from Tulsa back in the late ’60s, a lot of the coaching, maybe the majority of it, came not from Punch [Imlach], but from the veteran players in the room,” he said. “Older players told you what you needed to know and held you accountable for doing your part.

“That was the way the game was then. That’s what you aspire to—to have that feeling within the room—players being accountable to each other first and foremost.”

You can read the rest of the story from Sportsnet here.