He patrolled the battlefields of Afghanistan and the prison cells of Kingston Penitentiary. Fighting fires was his latest challenge. 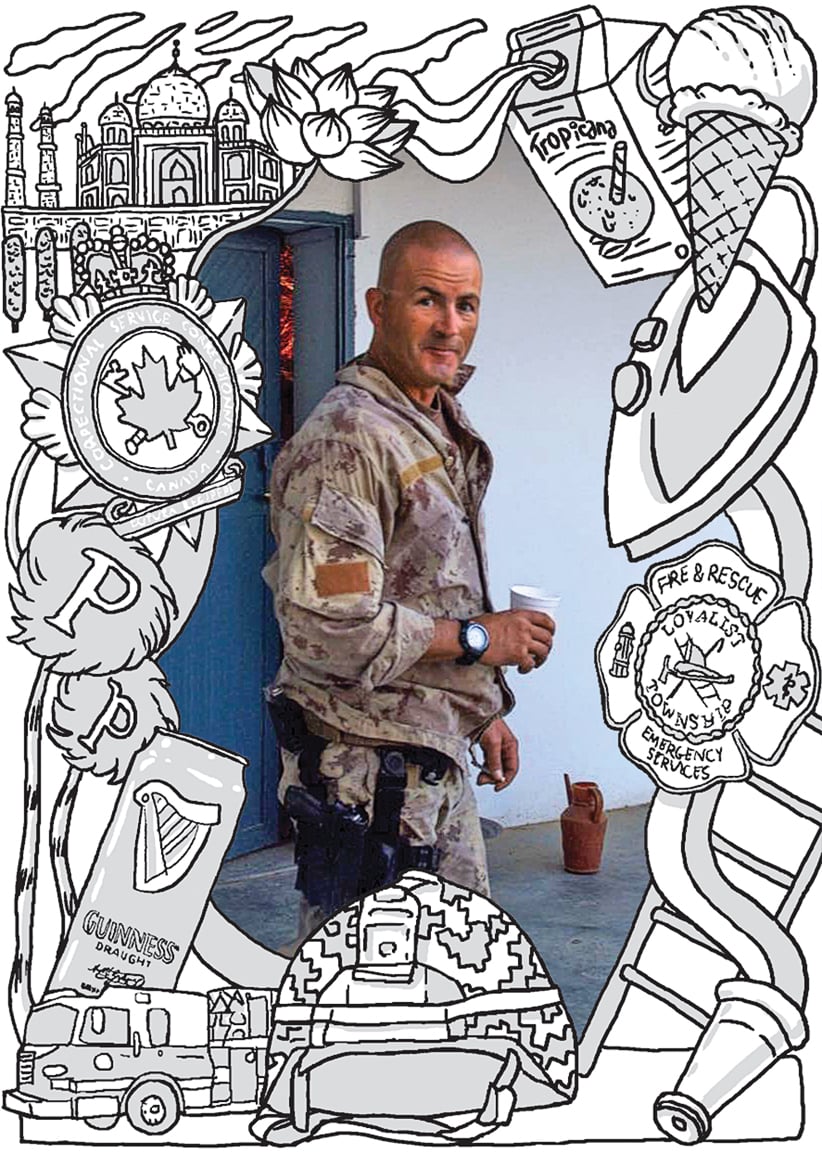 Patrick Albany Joseph Pidgeon was born in Toronto on Sept. 9, 1970, the only child of Walter, an airframe mechanic, and Solange, a stay-at-home mom. Stationed at CFB Trenton, Walter served seven years in the Air Force before the family relocated to Laval, Que.

Patrick was an active little boy, an avid soccer and baseball player, and even at a young age he dreamed of travelling to faraway places. An Air Cadet during his teenage years, Patrick also felt a strong urge to serve, enlisting in the infantry Reserves (Les Fusiliers du St-Laurent) in 1994. Fellow soldiers nicknamed him “the Machine,” a nod to his uncanny ability to withstand pain. In 2001, after transferring to Le Regiment de Maisonneuve, Patrick volunteered to go to Bosnia, his first overseas deployment. It would not be his last.

A corrections officer by trade, Patrick was later posted to Kingston Penitentiary. To his new co-workers at the country’s most notorious prison, two things immediately stood out: his immaculately shined shoes, and his thick French accent. “He was like a French John Wayne,” says Matt Smith, a friend and fellow guard. “He was very by the book, and his uniform was always impeccable. He was the only guy I knew who drove around in a Jeep with pressed uniforms hanging in the back.”

By 2006, Patrick was ramping up for another tour, this one in Afghanistan. Still a reservist, he volunteered to deploy with the 1st Battalion of the Royal Canadian Regiment. “He was such an example of what every person should be,” says Todd Vanderklooster, a senior member of Patrick’s section.

A nurse with Correctional Services Canada, Karen Green, was working at Kingston Penitentiary when her future husband returned home. “Whenever he came to health care the girls and I would go ‘ga ga,’ ” she recalls. One day, when the nurses ordered lunch (Indian food from Darbar Restaurant) they asked Patrick to join them. He and Karen instantly clicked, chatting about their mutual desire to visit India. They went for ice cream on their first date; later, when Karen invited him to watch a movie, Patrick showed up at her house not with a bottle of wine, but with a carton of juice. “He wasn’t a big drinker at all,” she says. On the rare occasion he did raise a glass, his beverage of choice was always the same: a cold, dark Guinness.

Karen’s son, also named Patrick, was eight years old when the other Patrick started coming around. They became affectionately known as “Big P” and “Little P.” “To my son, that was his father,” Karen says. “And to Patrick, that was his son.”

Big P returned to Afghanistan in 2010. A military police reservist by then, Cpl. Pidgeon—“Pidge,” as everyone called him—was part of a specialized unit mentoring Afghan police officers. Although never one to boast, his service was singled out for a Chief of the Defence Staff Commendation.

Back home in 2013, Patrick participated in the closing ceremony for Kingston Penitentiary, standing guard in Tower One wearing a 1970s-era dress uniform (meticulously ironed, of course). Three years later, he and Karen finally embarked on their dream trip to India, the first thing they ever talked about. In the months prior, Patrick mapped out their journey on a large piece of plywood in the basement. “I called it ‘Command Central,’ ” Karen laughs. “Patrick was very organized, very methodical.”

Those traits were on full display in the summer of 2015, when he became a volunteer firefighter in Loyalist Township, just west of Kingston. Patrick soaked up every bit of training he could. In early July, he was named to the shore-based rescue team. “He was bugging me about getting training manuals so he could read up on it,” says fire chief Fred Stephenson. “I said: ‘Well, we’ve just decided we’re doing the team, and we’ve only now just ordered all the training manuals. So you’re going to have to wait until they get here.’ ”

On July 16, a Saturday, Patrick and Karen were painting the basement in their Amherstview home. In typical form, Patrick was ribbing his wife about dripping some paint. “I said: ‘Patrick, it’s the trim. Nobody is going to notice,’ ” Karen recalls. “He said: ‘Well, if you’re going to do a job, do it right.’ ”

At 4:47 p.m., Patrick’s pager went off. He raced up the stairs and out the door, on his way to a nearby apartment fire. Patrick never came home, suffering fatal injuries as he battled the third-floor blaze. He was 45.