Robinson's dream was to be an engineer, and his goal was a post at Via Rail 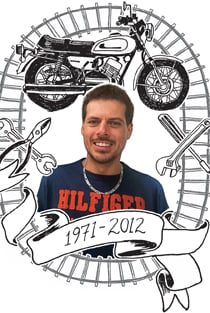 Patrick Israel Robinson was born in Hawkesbury, Ont., just across the Ottawa River from Quebec, on May 28, 1971, the second son of Robin, a homemaker and restaurant chef, and Claude, a railway man who spent decades as a welder for CN. When the Robinson boys were young, the family lived in the country outside nearby Alexandria. They were raised bilingual, and their paternal grandparents, the Robinsons, played a big role in their young lives. “My dad came from an English family, and my mom’s a Larocque from Hawkesbury, so a French family,” says Patrick’s older brother, Ken. So the two boys were always steeped in both cultures.

Out where the Robinsons grew up, outdoor hockey was the big thing—“the only thing,” Ken says—to do in the winters. The boys were on skates as toddlers. But where Ken, older by 16 months, took to hockey right away, Patrick always had other interests. From a young age he was obsessed with toy trains, toy cars, anything with parts that moved. That interest only swelled as he grew older and began spending more time in his father’s garage. “I was the jock, I played every sport you could think of,” Ken says. “He wasn’t into that part of it. He was into motorcycles, the wood shop. He loved to build stuff.”

When Patrick, whom everyone called Pat, was a teenager, the family opened a restaurant in North Lancaster, Ont. Their mother did the cooking—everything from breakfast to pizza and steaks—while the boys helped out where they could. The restaurant was where Patrick met many of his friends. And if he wasn’t there, he’d be back in the garage, either working on cars with his dad or fixing up bikes with his buddies. His own motorcycle, a 550-cc road bike, was a point of pride. “Being on his motorcycle, that’s what he did,” Ken says. “He was the typical guy with a hot bike. All the girls would want to ride with him.”

But if motorcycles were Patrick’s passion, the railroad was his calling. Almost as soon as he finished high school, he was down at the CN offices, looking for work. In his late teens he landed a job as a railway labourer. As part of a crew of five or six, he trucked up and down the line, fixing problems wherever they arose. Working with his hands, fixing tracks, Patrick thrived. “It was so fitting,” Ken says. “He was truly blue collar.”

In 1996, Patrick met a young woman named Gail Lauzon at La Maison, a bar in Cornwall. The two hit it off and were married the next year. Children soon followed: Amanda was born in 1998, Logan three years later. Patrick and Gail separated in 2002 and divorced in 2008. But they both remained heavily involved in their children’s lives. “Everything revolved around the kids,” Ken says. “They basically shared custody throughout that time.”

In the meantime, Patrick was working his way up at CN. He spent a few years with a smaller carrier—Ottawa Central Railway—but his long-term goal never wavered. Patrick’s dream, Ken says, was to become a railroad engineer. He knew that could happen at CN, but the gold standard, the job he wanted more than any other, was to be an engineer with Via Rail. “He just wanted to get to the top,” Ken says. “And to him, that was the top. No offence to anyone working at CN, but that was his dream, and he talked about it forever.”

It was a long time coming. For years, Via wasn’t hiring. When a trainee position did open up, it was based in Toronto, hours from Patrick’s home and his kids in Cornwall. But in October 2011, he made the leap anyway. Gail agreed to take the kids during the week and Patrick moved into an apartment in the big city. Even then, he kept in constant touch with Amanda and Logan. Colleagues told Ken that his brother always got upset when, because of bad reception on board the train, he couldn’t reach his kids.

On Sunday, Feb. 26, 2012, Patrick was on the back end of a Niagara Falls to Toronto trip, observing two senior engineers as part of his orientation at Via. He sent the kids a text message at about 1:30 p.m., saying he was looking forward to seeing them that week. He never made it. Later that afternoon, the train Patrick was on derailed while switching tracks outside Burlington, Ont. The force of the crash killed him and the two other engineers, Peter Snarr and Ken Simmonds. Dozens of others were hurt in the wreck, which has been linked to excessive speed. Patrick was 40 years old.