Pepsi's ad was tone-deaf—and, since it came from Pepsi, logical

A much-mocked Kendall Jenner-helmed Pepsi ad has been pulled. But why were people expecting anything better from the brand? 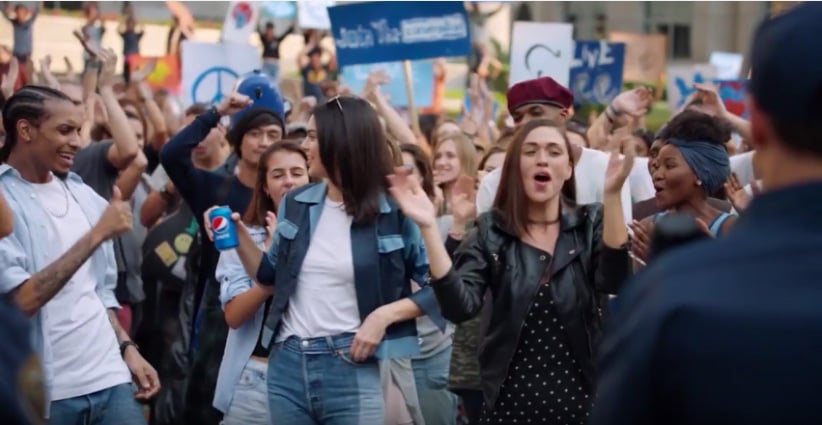 In 1999, a Japanese video game developer released an unlikely title: an automated-running platform game in the style of Temple Run called Pepsiman. It cast the player as a svelte man clad in a red, white and blue unitard, sprinting maniacally across various American backdrops, frantically hopping over white-picket fences, and collecting as many cans of icy-cold Pepsi-Cola as possible. Occasionally, in his mad dash to collect cans of pop (for no apparent reason other than sheer accumulation), Pepsiman would find himself with a garbage can stuck on his head, transforming him from branded spandex superhero to bungling corporate stooge.

It is a straight-up funny image, but it is also a salient one in the wake of Pepsi’s recent, widely derided, since-withdrawn commercial spot. A Pepsi-logoed wannabe-hero stumbling around blind with a garbage pail on his head offers a pretty canny image of the brand’s reputation as a corporate entity.

For anyone who hasn’t been subjected to it, the ad—aired on April 4 and retracted a day later—features swaths of young people marching en masse towards a police barricade. (What exactly the police are barricading is never made clear, and is irrelevant.) It’s intercut with shots of “youths”—mostly people of colour—working, creating, and composing, all while drinking Pepsi. (I’m willing to wager that nobody, ever, in the whole hitherto history of human civilization, has ever written music for the cello while drinking a Pepsi, but again: besides the point.)

The march finds an unlikely leader in American socialite and “Instagirl” par excellence Kendall Jenner, who abandons a modelling gig mid-shoot, ditches her blonde wig, lets her dark hair down, and leads the charge. As the masses surge toward the cops, there’s a moment of tension that is instantly defused when Jenner hands a policeman a can of Pepsi. He cracks it, smiles, sips—and everybody cheers. As simple as that, Pepsi (and Jenner, who in her utter vacuousness might as well be recast as some kind of revolutionary hero) has fixed racism.

Throughout, the aims of the depicted protest are left ambiguous, even intentionally unclear. Placards painted in Pepsi blues and whites are emblazoned with slogans like “UNITY” and “JOIN THE CONVERSATION,” and just plain old “LOVE”—in so doing, insidiously giving the lie to the common criticism that a mobilized political left lacks the imagination to even conceive of the future it’s fighting for. That the ad trades in such cliches, and appropriates images of political unrest and resistance—Black Lives Matter, the Women’s March, the general feeling of anger and protest that has defined America in the popular consciousness for at least the past few years—in order to hawk soda pop is of course stupid and disgusting. But for late-capitalist consumer culture in general, and PepsiCo. in particular, it’s pretty much par for the course.

Pepsi’s earliest television ads, dating back to the 1950s, focussed on value and price competition—essentially pitching the product as just as good as The Other Guy (i.e. Coca-Cola), but cheaper. But with the 1963 “Pepsi Generation” campaign, that all changed. Against Coke’s stodgy imagery of Santa Claus and Norman Rockwellian middle-class Americana, Pepsi’s ads showed youngsters riding motorcycles, dancing, singing, laughing, and indulging in a scaled-back, sugar-water-fuelled vision of the ‘60s American bacchanal. “There’s a whole new way of living,” went the jingle. “Pepsi helps supply the drive. It’s got a lot to give, for those who like to live.” (The implicit suggestion that Coke-drinkers hate being alive remains the most charming thing about the ad.)

It’s a cliche of advertising in the post-Mad Men age, when pretty much everyone is fully hip to of the machinations of consumerism, but nonetheless: Pepsi wasn’t selling a product so much as an image. This has pretty much been the guiding philosophy of marketing for the better part of a half century, but in many ways Pepsi was there first. In the mid-‘90s, there was the Pepsi Points promotion, which gave soft-drinkers the luxury of collecting points from Pepsi packaging, then exchanging them for Pepsi goods—essentially rewarding the consumer for their consumption by turning them into unpaid walking billboards. This, too, spoke to a kind of branded-lifestyle marketing. T-shirts, ball caps, and branded dog tags were conspicuous signifiers of just how much Pepsi a person drank.

Then, of course, there was the Pepsiman game, and its attempt to market directly to caffeine-junkie console gamers. (In 2007, Mountain Dew, which is owned by PepsiCo, introduced a crossover soda pop tied to the release of the game Halo that was literally called Game Fuel®.) Diet Pepsi also recently aired ads in which middle-aged actors, given the option of doing something youthful and reckless, resign themselves instead to complacency, chirping, “On second thought, I’ll stick with my Diet Pepsi”—a campaign that essentially reverses the free-wheelin’ spirit of the original “Pepsi Generation” ads. But no matter. Whether you’re a hirsute hippie motorcyclist, marathon e-sports competitor, or buttoned-down, office drone/cubicle zero, Pepsi (in one or another form) is the drink for you.

So the disastrous Kendall Jenner campaign is right in line with Pepsi’s past campaigns. It takes elements of a culture that already exists, waters it down, spikes it with sickly sweet syrup, and sells it back to that same culture. The incredible, and borderline-inspiring, thing is that this time, nobody seemed to be buying it.

In their 2004 critique of counter-cultural consumerism, The Rebel Sell, authors Joseph Heath and Andrew Potter index the manifold ways in which rebellion and protest have been successfully laundered as forms of consumerism. Their disappointingly conservative thesis is that subversion isn’t actually subversive, that the counter-culture isn’t actually counter to anything, and that the culture cannot be—to dust off some old Adbusters jargon—“jammed.”

Against such despairing prescriptions, the recent reaction to Pepsi’s wildly tone-deaf, laughably misguided campaign actually feels encouraging. Sure, diverse blocs of contemporary progressives—social democrats, dirtbag leftists, Black Lives Matter front-liners, punk-rock cellists—may lack a unified vision or political end-point. But there’s clearly a shared sense that profiteering soda manufacturers have no business capitalizing on a culture of legitimate anger and protest. Not only can the dominant late-capitalist culture be jammed—we’ve got a clear idea where the bungling corporate stooges at PepsiCo. can jam it, too.