A passionate athlete and outdoorsman, he was happiest on a ski hill or a frozen river 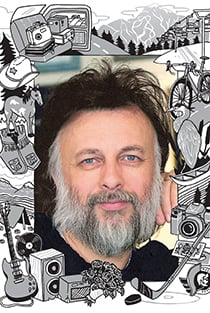 Peter Kirk Fachnie was born June 22, 1952, in Barrie, Ont., the first of three children born to Lionel Gordon Fachnie and Kathleen Piper. Lionel was a sergeant in the Royal Canadian Air Force, so the family moved often. After the birth of Steven, their youngest, the Fachnies left Borden, Ont., for Penhold, Alta. Lionel piled suitcases and blankets on the back seat of the car, a makeshift bed; Kirk, then 5, and four-year-old Claire stared out the rear window the whole way.

In Alberta, Kathleen, a bank teller, won the kids a pony in a contest. They named it Patches for its brown, black and white colouring. Kirk, a big fan of westerns, rode Patches alongside his dad in a fringed vest and a cowboy hat he was rarely seen without.

When Kirk was 10, his dad was posted to CFB Baden-Soellingen in Germany, where Kirk quickly made friends with the other army brats, playing hockey and baseball. His parents took full advantage of their European location: the family camped all over Germany, Belgium, Switzerland, Italy and France.

In 1967, the family moved to Ottawa, where the kids enrolled at Rideau High School. Kirk, 13, though shy at first, eventually joined two rock bands, Buster Brown and Trillium, that practised in the Fachnies’ basement. Kirk’s passion was the guitar—he loved the Beatles and the Rolling Stones.

In Grade 12, he met Catheren Rennick, a petite blond, at a small party. She was struck by his long, wavy, black hair and piercing blue eyes. “He was different—he was on a natural high,” she says. That night, he walked her home, and the two began dating. They married in 1973, in a small ceremony at Ottawa’s Eastbrook United Church, and settled south of Ottawa, in an old Victorian home in Kemptville, Ont., where they raised two daughters, Julia and Victoria. Kirk wasted no time involving the girls in his many sporting interests. An avid runner, he had them regularly doing five- and 10-km races, and for four years in a row enrolled the entire family in the Tour de Quickie, a 20-km bike race around Ottawa.

As a child, Julia rode her bike alongside her dad while he trained daily for his annual marathon. Once, after she got scraped up after a run-in with a car, Kirk dusted off his daughter with words of advice: “Julia,” he said, “you’ve got to get back on your bike, because if you don’t today you never will.”

In 2005, Kirk and a few other cycling enthusiasts shadowed the Tour de France. They rode out ahead of athletes like Lance Armstrong and Jan Ullrich, then stopped to watch them whiz past. Four times a year, he and his ski buddies would hit the slopes at Lake Placid, N.Y.

Kirk combined his passion for sports with photography, often kayaking in nearby rookeries at daybreak to snap pictures of blue heron and other birds. One mild Christmas Eve, Kirk took Catheren kayaking on the Kemptville River where there was a mist floating above the water. “It was so romantic,” she says.

For 13 years, Kirk owned a camera shop. He shot both his daughters’ weddings before taking a job with the federal government six years ago, purchasing camera equipment. Victoria’s son, Elgin-Alexander, was the Fachnies’ first grandson, and he and Kirk shared a special bond. The two were often found playing with toy cars and watching hockey. When he was just nine months old, Elgin was diagnosed with a rare form of cancer. For his third birthday he requested an orange hockey stick. Kirk searched for one high and low, until he finally found an adult version and cut it down to Elgin’s size. Just over a month later, in May 2007, Elgin passed away while watching their beloved Ottawa Senators make it to the Stanley Cup finals.

The tragedy drew the Fachnies together. Every Christmas, Kirk, Catheren, and their daughters’ families would leave town to spend three days catching up, sometimes skiing. Kirk was also a member of the Kemptville Oldtimers hockey team.

On Feb. 10, Kirk and Catheren headed out for dinner at a friend’s house along the Rideau River, just outside Ottawa. The men cleared off a patch of ice, and began a game of pick-up hockey. Stopping for a break, they headed for shore. Kirk, a graceful athlete, was skating backward and suddenly stumbled, hitting his head. He was airlifted to Ottawa Hospital but never regained consciousness, and died two days later. He was 60.