Pompey and circumstance: A Canuck finds a home with the Jays 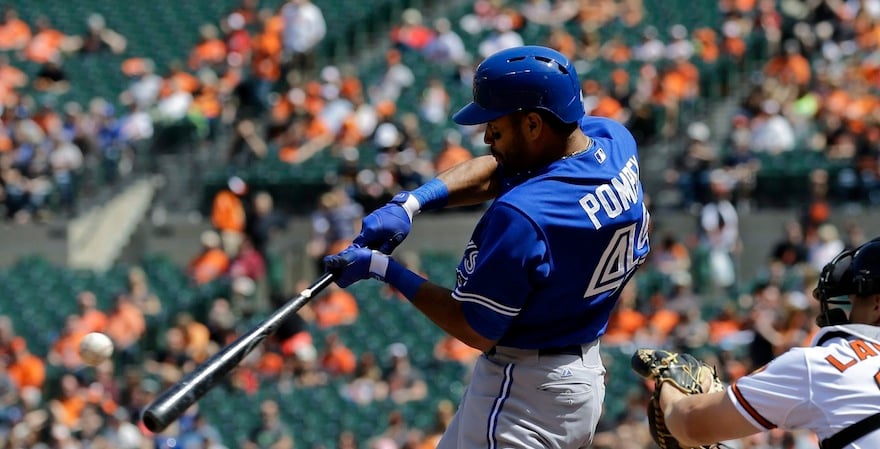 Dalton Pompey swatted his first major-league home run on Sept. 23, a second-deck shot against Seattle’s Félix Hernández—a pitcher so dominant (usually) that his nickname is “King.” As he rounded the bases at the Rogers Centre, fans on their feet, Pompey tried to contain his smile. He couldn’t.

That night, the Toronto Blue Jays rookie slept in his boyhood bedroom in Mississauga, Ont., 30 minutes from the ball yard—the same bedroom where he dreamed of what is now reality. “It was a pretty cool feeling, driving downtown and going to the stadium,” he says. “It was just surreal, knowing I was going to play for the Blue Jays. I would go to games to watch as a kid, but now I was going to take part.”

He did much more than participate (as King Felix can attest). Called up from the minors in the waning days of last season, the switch-hitting speedster enjoyed such an impressive big-league debut—in the batter’s box, and with a glove—that the Jays’ centrefield job became his to lose. So far in this young season, he’s started there all but one game. “They’ve really shown that they believe in me,” Pompey says. “But at the same time, I know what I still have to do. I have to go out there and be ready for the opportunity, and prepare myself for it. Nothing is guaranteed.”

For Jays fans, one thing is sure starting to feel guaranteed: no playoffs. The team hasn’t suited up for an October inning since Joe Carter touched ’em all to win the 1993 World Series, the longest active post-season drought in the majors. (Pompey, now 22, was just 10 months old when Carter hit that glorious home run.) But if this finally proves to be the breakout year, Pompey—and a growing core of Canadians, born and raised—could be at the heart of the resurgence.

Never before has Canada’s baseball team felt so genuinely Canadian, even after the blockbuster trade that sent British Columbia’s Brett Lawrie to the Oakland Athletics. Assuming Pompey cracks the roster when spring training breaks, the starting nine could include three citizens (along with new catcher Russell Martin, and freshly acquired outfielder Michael Saunders). Throw in veteran southpaw Jeff Francis, a former Cy Young contender vying for a spot on the pitching staff, and it’s entirely possible that four Canadians could be on the diamond at the same time—a historic scenario, considering only 15 other Canucks have suited up for the Blue Jays during the franchise’s 38 seasons. (The club’s longest-serving Canadian? Relief pitcher Paul Quantrill, the pride of Port Hope, Ont., who appeared in 386 games.)

“Being Canada’s only team, it’s a really special feeling for me—and I’m sure for all the fans, too, knowing they can relate to us,” Pompey says. “It gives a feeling of Canadian pride.”

Jays general manager Alex Anthopoulos (himself a Canadian who grew up cheering for the Montreal Expos) has always downplayed the importance of homegrown talent, insisting that his job is to field a winner, not fill the roster with sentimental favourites. The Lawrie deal certainly confirmed that stance. But if the Jays somehow manage to accomplish both—a bona fide playoff contender, with a dash of Canadian content—hard-core baseball fans won’t be the only ones watching (or scooping up tickets).

To his credit, Pompey isn’t concerned about any of that. As thrilled as he is to be a Canadian on Canada’s team, he insists he doesn’t feel any extra pressure. This is a young man, after all, who was drafted at age 17—486th overall—and who toiled in the minors for five years before getting his shot in the show. In other words, he’s too busy working on his craft to ponder the fairy tale. “For a lot of people, I kind of came out of nowhere,” he says. “I feel like anything I do, at least next year, is icing on the cake. And if I go out and do my thing, things will work out.”

For him, and the entire country.