Potty training parties are 'ridiculous.' But they work.

Peace out, Pampers. Bring on the potty training poo party. 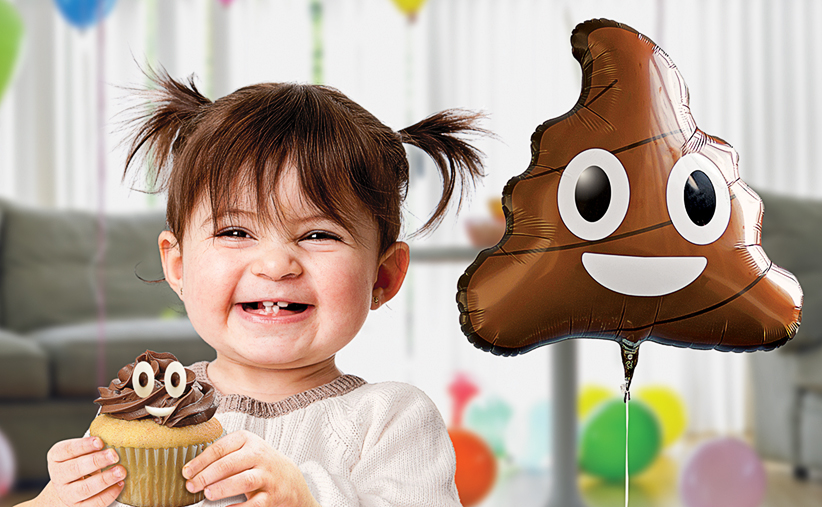 Charlotte Fleming swears it started as a joke. Who actually invites family over in earnest to nibble on poo-shaped cookies (complete with googly eyes like the emoji), munch on cake that looks like underwear and sing “Happy poo party” to the tune of “Happy Birthday”?

Her brothers teased her relentlessly. Some joked about filling up on bran beforehand to clog the septic system. But there was one person who was seriously excited about the “potty party” to celebrate Fleming’s daughter being potty trained: the little girl herself. And she needed the motivation.

After Fleming gave birth to her second child in March—a baby boy—her older daughter regressed in her potty training. There was a cottage trip planned for the Canada Day long weekend, so Fleming told her little girl that if she was consistently using the potty for both pees and poos by then, they’d have a party for her.

“It’s totally ridiculous—the whole thing,” Fleming says. “But she got really excited thinking of a party.”

They sent out invitations—“Peace out, Pampers”—to family and friends, and “when we found out people were coming over, we figured we’d better put up balloons,” Fleming says. “Things got carried away.” But, most important, the tactic worked.

Related: How game theory can help you become a better parent

To help the child learn to command the commode to begin with, one of Crane’s recommendations includes having mom and child teach one of their dolls how to use the potty. Once the doll “goes to the bathroom,” have a mini-party to celebrate. Pretty soon, the child will be so excited by the positive vibes from teaching the doll, he or she will be excited to try it out themselves, all while feeling as though they’re in control of the decision. “The best part is the child has no idea they’re being potty trained,” Crane adds. “They just think they’re having fun.” The concept was so popular, Dr. Phil lauded it on his TV show.

If it sounds like a lot of celebrating for nothing, ask any parent who has struggled to potty train their toddler; the accomplishment sounds like a miracle in itself. But friends aren’t always lined up at the door to play “diaper toss” and “pin the undies on the bear.”

“It’s a basic function that every human being has to learn,” says Shonna Petrook, a mother of two living in Toronto. “What’s next? A party for learning how to write your name, losing a tooth, walking, talking, holding a fork?”

But Petrook can take a joke—at least that’s why she attended Fleming’s potty party. “I don’t think she meant it to be serious,” Petrook says. “She’s a sensible person.”

If Pinterest is any guide, there’s no shortage of sensible people hosting potty parties across the continent. Bronwen Clark, also of Toronto, didn’t host one because she and her husband are the kind of parents looking to celebrate every mundane milestone of their daughter. “We did it out of desperation,” she says.

Clark initially wanted to wait until their little girl made it her own decision to use the toilet, but by the time she was 3½—and kindergarten was beckoning—she still showed no interest. Clark needed to speed up the process.

“We told her if you go to the bathroom on the potty, we’ll throw you a party and you can invite your friends,” Clark says. Within days, she was using the toilet and Clark invited friends over to celebrate with pizza and cake.

The other parents “thought it was crazy,” she says. “But they all jumped on board. And they ended up throwing poo parties for their younger kids, too.”

Despite previous success, Clark has decided to get a head start on potty training now that their second child is 18 months old. Why? So “we don’t have to resort to another poo party.”