Prenatal entertainment, coming to a screen near you

In the age of Instagram, 3D ultrasounds fit seamlessly among adorable pregnancy and birth announcements—most of the time 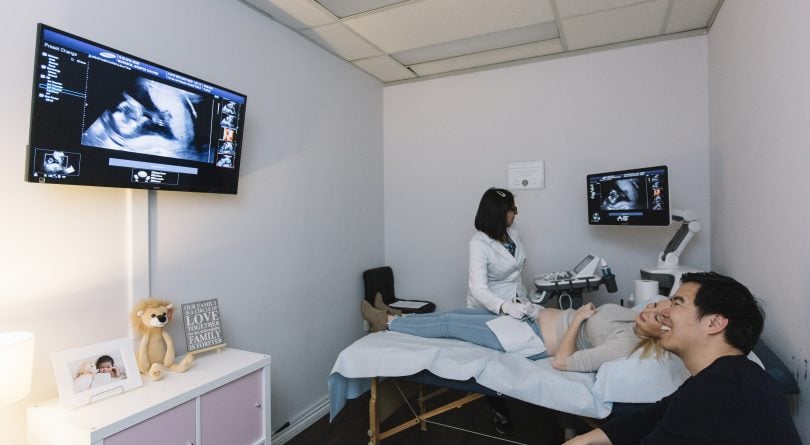 For 10 years, sonographer Zeynal Ismayilov performed ultrasounds in hospitals. Pregnant women know the drill: you wait months for your appointment—longer still when it inevitably runs late—then you’re hustled into a tiny dark room. The technician isn’t allowed to tell you anything, and may even turn the screen away from you to discourage peeking, all while you make awkward one-sided conversation. If you ask nicely on the way out, the tech might print you a few shots to show family and friends, who will politely feign excitement at a blurry image that looks like every other ultrasound they’ve ever seen.

It was Ismayilov’s wife, marketer Fidan Ismayilova, who imagined a better way. “We wanted to create the complete opposite of the ultrasound experience—something cozy, homey and luxurious,” she says. And in October 2015, A Date With Baby opened for business in Toronto.

Since the first private ultrasound clinic opened in Canada in 2013, hundreds of clinics offering non-medical, a.k.a. “entertainment,” ultrasounds have popped up across the country, amid warnings from Health Canada about the possible health risks of excessive ultrasounds. They range from reputable to sketchy, say experts, but as the field fills with players, the sector has morphed again into what might be considered prenatal entertainment. Alongside the 3D still image or 4D live video of your baby in utero is a full, spa-like experience for the whole family.

To wit: A Date With Baby’s “Cotton Candy” package. For $275, a client gets two 30-minute ultrasounds projected on a wall-mounted big-screen TV, two printed 3D images and a 4D video, gender determination upon request, a maternity photo session, a Pampers swag bag and—of course—a cotton candy snack. At 19 weeks, Thornhill, Ont., mother Irina Zabashta experienced the service with her husband and four-year-old son, who enjoyed juice and cookies in an on-site playroom until the big moment. “Even though I kept telling him there was a baby inside, I don’t think he really got it until then,” says Zabashta. At 23 weeks, she returned for another look and a gender-reveal party with a group of 10 guests, where a popped balloon exploded with pink confetti.

To observers like Lakehead University women’s studies professor Jen Chisholm, entertainment ultrasounds (and gender-reveal parties, and maternity photo shoots) are just another trend within the “performance of motherhood.” For her Ph.D. thesis, Chisholm dug deep into the emergence and prevalence of these clinics, which reinforce a certain kind of high-pressure parenting (the slogan of one: “Get a head start on loving your baby”). “You’re very much on display and it’s all kind of a spectacle,” says Chisholm. “It’s a very visual and sharable moment.”

In the age of Instagram, 3D ultrasounds fit seamlessly among adorable pregnancy and birth announcements—most of the time. Brie Birch, the owner and operator of Belly Bean Imaging in Vancouver, recommends her clients wait until 27-32 weeks. “That’s the sweet spot, when they’re getting full features and chubby cheeks,” she says. For those who can’t wait, Birch cautions that the image might be less cute or even a little creepy. “Sometimes the baby will have a waxy, melting look with dark eyes,” she admits. The odds of getting a good pic on the first try, she adds, are about 50-50.

Like Ismayilova, Birch fell into the ultrasound business when pregnant and “waddling downtown with my whole family. I thought, ‘Wouldn’t this be better at home?’ ” The former surgical dental assistant completed a week-long course and invested in a portable ultrasound machine, available on eBay for anyone who wants one, which she’ll happily bring to your house and plug into your TV. She’s done her top-selling $249 “Quality Time with Baby” package, complete with 2-, 3- and 4D images on keepsake DVDs, for couples at home and in front of wedding-sized parties of 50 or more.

Birch is careful not to speak for other ultrasound entrepreneurs, but she is confident that her service is safe. Through her research, Chisholm noticed a general “safe-until-proven-unsafe consensus” among providers and clients, though the Society of Obstetricians and Gynaecologists of Canada disagrees. “Ultrasound does involve the use of energy and should only be used when deemed medically necessary by a physician,” explains CEO Dr. Jennifer Blake. Ultrasounds have a very safe 30-year track record, but nobody’s sure how many is too many—in part because no one wishes to experiment on healthy fetuses. And with the field unregulated, the concern is that an unskilled technician could spend hours to capture a sufficiently saleable shot.

Still, it’s hard to imagine the medical community wouldn’t welcome 3D ultrasounds were they regulated and conducted in a hospital. They could help moms like Cathy Joaquim, who noticed her son had a distinctly pointy forehead about a month after he was born. After a long referral process and eventual diagnosis of surgery-requiring craniosynostosis, the Brampton, Ont., mom showed her elective 3D ultrasound to her surgeon. “He said he’s never even seen a 3D ultrasound, but that he could clearly see the condition in utero,” says Joaquim. She believes every woman should have 3D imaging done by a doctor, for free.

Today, the pictures bring her comfort. “I look at the same photos and see a perfect baby. It brings me back to the joy of that moment, before all this happened,” says Joaquim, whose now 19-month-old son has recovered quickly and is developing beyond expectation. Despite the complicated big business surrounding private ultrasound clinics, such sentiments ultimately converted Chisholm into an advocate. “It’s not really about the picture, it’s about the meaning,” she says. “If you choose to do this, enjoy your experience. And do your research.”