Preppers unite! Let's get on with doomsday already 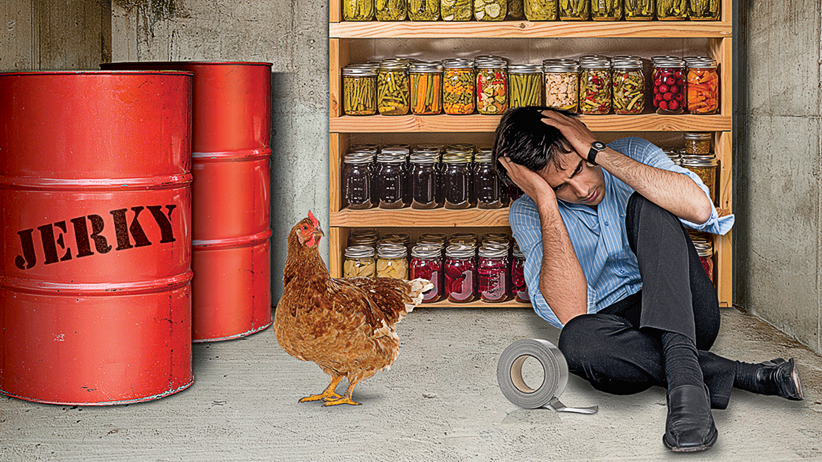 Preppers packing list: Pickled tomatoes, jerky, a chicken and duct tape—that’s enough to get through the wholesale collapse of Western civilization, no?

Summer vacation is over and the kids are in school—time to pack away the flip flops, vacuum the sand from the car and prepare for the wholesale collapse of Western civilization.

What, you’re not part of the “prepper” movement? Wake up, friend. In anticipation of a societal breakdown caused by global depression, runaway pandemic or provocative tweets, more people are packing up and hunkering down in a remote area of the U.S. northwest known as the American Redoubt. (From a marketing perspective, “redoubt”—a fancy word for stronghold—helps to sell real estate better than, say, Land of 10,000 Loners.)

These isolationists even have their own online radio station, the Prepper Broadcasting Network. PBN offers programming geared to the discerning hermit, alongside commercials for a home freeze dryer that will keep vegetables and fruit edible for 25 years. Dried apricots for breakfast for the 3,957th straight day, darling? Sure thing, skeleton that used to be my husband!

The affable host of a PBN show called Prepping for Tomorrow claims to be speaking from “a secret bug-out location,” which sounds mysterious but is probably an Arby’s parking lot. Another likes to announce that he is “broadcasting live from deep within your third eye.” Neat! One of my PBN favourites is the Lil’ Suburban Homestead Show, with tips on how to keep bees, pickle tomatoes and stock your post-apocalyptic pantry with peach salsa. Who says the end of the world has to be the end of the world?

If nothing else, it’s hard not to admire the movement’s work ethic. Preppers believe something very bad is destined to happen—and they go to tremendous effort to prepare for it. Whereas I recently paid to watch on demand a movie that I own because the DVD was slightly “over there.”

At the heart of the prepper movement is an affinity for self-reliance and a disdain for politicians—preppers don’t trust people in authority, or people with power, or people. “There are a lot of horrors out there,” host James Walton recently said one day on PBN’s I Am Liberty program. “There are no friends.” Most of the things being said these days on PBN were probably first uttered on an album by the Smiths.

This past week, Walton’s listeners participated in the first-ever Survive the Bug-out Challenge, in which the host created a “manufactured scenario” that sent willing preppers fleeing deep into the woods to set up a survival camp. “We can go over checklists, and we can sharpen knives, and we can clean guns,” he said. “[But] this is a fun way to self-audit our preparation.”

I have to say: It made me yearn for a bug-out bag. My family and I are woefully unprepared for society to go all Walking Dead on us. We’d be the only folks showing up at the Redoubt with nothing more than half a roll of Mentos and four Starbucks Rewards cards.

There are other hints I wouldn’t cut it as a prepper. First, I would definitely overreact to the first sign of potential meltdown. The stock market would drop a few hundred points and—boom—that’d be enough to send me into my underground bunker for a couple years, where I’d patiently gnaw my way through 25 miles of jerky.

Second, once I actually got prepared, I’d quickly get impatient for civilization to collapse. I have my rations, my water filters and four seasons of The Good Wife on iPad—LET’S GET ON WITH DOOMSDAY ALREADY. So much preparation, so few zombies.

During the Bug-Out Challenge, Walton told his listeners it’s critical to test one’s readiness: “I’ve seen people with gadgets and no idea how to use them.”

This would definitely be me, by the way. As a prepper, I’d amass the finest of everything—the plumpest chickens, the biggest guns, the best hand-cranked grain mills. But when poop would meet fan, I’d almost certainly kill myself inside of 20 minutes, probably by accidentally freeze drying my own head.

To its credit, PBN tries to help the amateur with survival tips. Here’s one I heard: “Wrap your lighters in duct tape.” Why? The guy didn’t say. Just to be safe I think I’ll wrap everything in duct tape. Apologies in advance to the chickens.