Starting a week of royal pomp and spectacle with a star 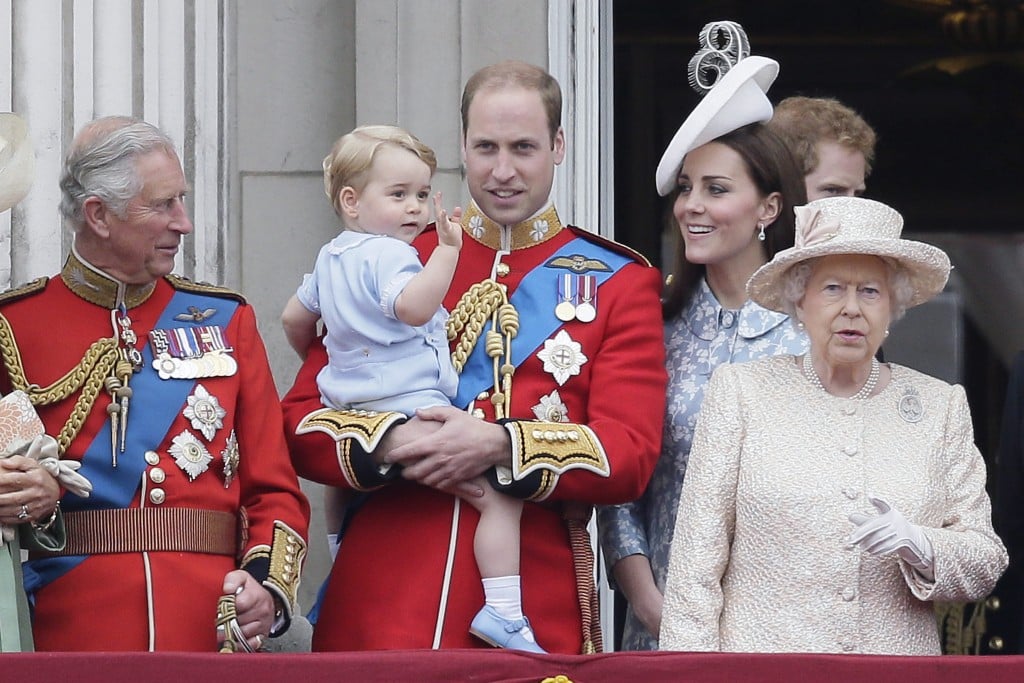 Britain’s Prince William holds his son Prince George, with Queen Elizabeth II, right, Kate, Duchess of Cambridge and the Prince of Wales during the Trooping The Colour parade at Buckingham Palace, in London, Saturday, June 13, 2015. Hundreds of soldiers in ceremonial dress have marched in London in the annual Trooping the Color parade to mark the official birthday of Queen Elizabeth II. The Trooping the Color tradition originates from preparations for battle, when flags were carried or “trooped” down the rank for soldiers to see. (AP Photo/Tim Ireland)

If there is one week royals-watchers love, it’s this one. It’s packed with event after event featuring masses of royals. They’re on horses, in carriages, one day decked out in velvet robes and feather caps, the next in the latest fashions.

It starts off with the biggest, grandest event on Saturday: Trooping the Colour.

This is the spot that 5.30am start gets you! #GettyImages #TroopingTheColour pic.twitter.com/SpwzvUmuGd

Here is the official explanation from the Household Division: The Sovereign’s birthday is officially celebrated by the ceremony of Trooping the Colour. This impressive display of pageantry takes place on a Saturday in June by her personal troops, the Household Division, on Horse Guards Parade, with Her Majesty the Queen herself attending and taking the salute. Over 1,400 officers and men are on parade, together with 200 horses; over 400 musicians from 10 bands and corps of drums march and play as one. Some 113 words of command are given by the Officer in Command of the Parade. The parade route extends from Buckingham Palace along The Mall to Horse Guards Parade, Whitehall and back again.

The soldiers, many of whom have served in Afghanistan, spend weeks practising. Timed to the second, it is such a complicated ceremony that there are two full dress rehearsals.While three Windsors are on horseback—Charles, William and Anne—the rest are in a variety of carriages. A mere 44 days after giving birth, Kate, duchess of Cambridge was in a barouche (yup, that’s the name) with her stepmother-in-law, Camilla, and brother-in-law, Harry. But six-week-old Princess Charlotte wasn’t forgotten. On the recommendation of her grandfather (Prince Charles), one of the marches played on Sunday was a very old one composed by the original Princess Charlotte, daughter of George IV.

Lovely picture of #PrinceGeorge waving from the window of Buckingham Palace at his dad below #TroopingTheColour pic.twitter.com/C8NHSOM7UK

The Colours of the Welsh Guards are carried (or ‘trooped’) down the ranks this morning at #TroopingTheColour pic.twitter.com/fqcIJmH5MR

Then it’s back to Buckingham Palace for the finale: the royal family appearing on the balcony. George was there for the first time, held by his father. Immediately, all the attention was focused on a 23-month-old toddler, and, for a family steeped in tradition, even his outfit was symbolic.

While many focus on the royals, the Queen’s eyes are firmly fixed on the Household Division. Officers say that with her vast experience in the Trooping the Colour, she misses nothing. “There is only one judge of how the parade has gone, and that’s Her Majesty,” says one BBC commentator. After all, she’s been doing it for nearly 70 years.