Prince Harry breaks up with 'too needy' Cressida Bonas

For a while it looked like a fairy tale, now come the recriminations 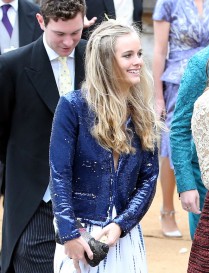 UPDATE from April 29, 2014: Well, it looks as though the whole “Prince Harry has found his true love” story is over. After months of speculation that Harry was going to announce his engagement to Cressida Bonas at any moment, the Telegraph’s royal reporter Gordon Rayner states that the two-year relationship is now over:

A source told the Telegraph: “The relationship has certainly at least paused for a breather. It is virtually impossible to have a successful romance and relationship in the full glare of the world’s media.” …The couple kissed and hugged at an event in Wembley Arena attended by 12,000 people, which was interpreted as a sign that they had grown more confident in the strength of their relationship. Two days later the couple were again out together in public when they attended a Six Nations rugby match at Twickenham. Miss Bonas was known to have struggled to cope with the pressure of being talked about as a princess-in-waiting, but her public appearances suggested she had got over her nerves. However they have not been seen in public together since, and one report tonight suggested it was Prince Harry who had decided to end the relationship because he found Miss Bonas “too needy.”

Royal writer Phil Dampier echoes my own thoughts on Cressida.

Cressida never looked comfortable in public. I could never see her coping with media glare for rest of her life. She is only 25. #toosoon

#cressida You need to be a certain type to marry into royal family. Kate and Princess Mary of Denmark have a bit of steel to them. Cress no.

Who knows if they will eventually get back together, but right now Cressida appears to be more like flightly Fergie than steely Kate. And for a royal family loathe to return to those bad old days, that could be enough to end the relationship permanently.

Here’s my original story about the relationship, from October 7, 2013:

Prince Harry has dated society darling/dance student Cressida Bonas for 15 months— but if tabloids are to be believed, they are about to get engaged. Unnamed sources are flooding London’s papers with quotes like this,“‘Cressida is The One. People have heard Harry talking about how special Cress is and about getting engaged.” Now even the respectable broadsheets, like the Telegraph, are jumping on the “they’re getting hitched” bandwagon: “Cressie is going to marry Harry,” one of her friends told the Telegraph. “Harry never stops talking about marriage and children, and she has now got used to the idea. The wedding is likely to take place next year.”

Given that Prince William took eight years to formally propose to Kate, so as to give her time to get used to the intense spotlight that will follow her for the rest of her life, these marriage rumours seem a bit rushed for the 30-year-old prince and his 24-year-old love. After all, Harry spent four months of that in Afghanistan, and is due to spend chunks of each year serving as an Apache attack helicopter pilot, away from his loved ones.

And, this is a woman often described as “free-spirited”—something that likely won’t endear her to Queen Elizabeth II—and who seems to spend most of her time partying and enjoying life with her aristocratic friends, including Princess Eugenie, who introduced the couple to each other last year. Then there’s her family, which can only be described as “modern” in terms of the number of marriages, and half-siblings. As the Telegraph stated: “Her mother is Lady Mary-Gaye Curzon, 66, the Sixties “It girl” and daughter of the 6th Earl Howe. Her father is Lady Mary-Gaye’s third husband, the businessman Jeffrey Bonas. One of her half-sisters, Pandora, is an accessories designer for Vivienne Westwood; her half-brother Jacobi Anstruther-Gough-Calthorpe is a polo-playing man about town. Her half-sister Isabella, to whom she is very close, recently married Sir Richard Branson’s son Sam.”

Bonas herself spent a gap year working in a bar and restaurant in Australia before going to university in Leeds. She graduated earlier this year from the Trinity Laban Conservatoire of Music and Dance in Greenwich and, as far as can be told, doesn’t have a job. No wonder recently breathless reports also include cautionary quotes, such as this one from the Telegraph: “Cressida has been in floods of tears,” one of her friends claimed. “Harry is coming on very strong, but she is all over the place. She thinks she is far too young to get married and is scared by all his talk of marriage and settling down.”

If this all sounds vaguely familiar, cast your minds back to 1986, when Prince Andrew, another royal helicopter pilot, fell fast and hard for society girl Sarah Ferguson. Like Harry, Andrew was a serving military officer who spent a lot of time away from home. And like Bonas, Ferguson was a pedigreed woman with a broken and complex family background. Yet they held hands as they jumped into an engagement and then marriage.

And we all know how that ended.