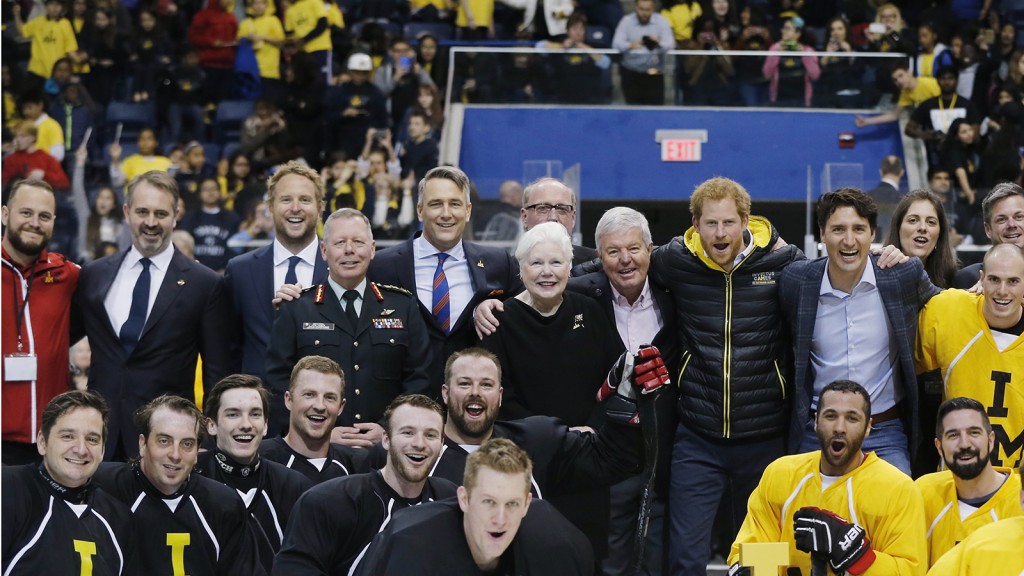 The ballroom at the Royal York hotel in Toronto has played host to dozens of royal events over the decades. But its crystal chandeliers have rarely towered over such a royal pep rally as what occurred on Monday when Prince Harry presided over the Canadian launch of his creation, the Invictus Games. It will take place next year from Sept. 26-30 in Toronto with more than 600 athletes competing in 12 categories.

It may have been the briefest of visits—mere hours on the ground—but Toronto made up for it with hordes of screaming school kids watching a sledge hockey game at a nearby arena, and thunderous ovations at the sedate ballroom. No surprise that the charming and charismatic royal attracted an A-list of the nation’s who’s who, including Prime Minister Justin Trudeau, Ontario Premier Kathleen Wynne, Lieutenant-Governor Elizabeth Dowdeswell as well as a notably large contingent from the military.

The inspiration for the Invictus Games—the name of which is derived from the Latin word for “unconquered”—comes from a 16-line poem written William Ernest Henley in 1875 while he was in an infirmary recovering from surgery to save his foot. It ends with two famous lines: I am the master of my fate, / I am the captain of my soul.

The games’ impetus began in February 2008 when the prince, then a serving member of the British Army, was pulled out of a forward operating base in Afghanistan after a news organization leaked his presence there. The “guilt having to leave my guys behind haunts me,” he said. Accompanying Harry on the plane home was the coffin of a Danish soldier and “three British lads in induced comas,” grievously wounded, missing limbs. Four years later, Harry would be back in Afghanistan, this time able to protect medical teams as an Apache attack helicopter pilot. 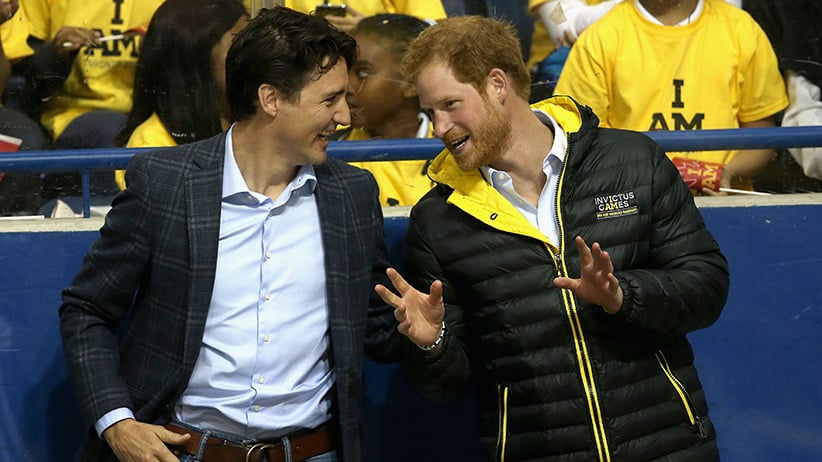 Prince Harry chats with Canadian Prime Minister Justin Trudeau as they watch a sledge-hockey match Mattany at the Athletic Centre on May 2, 2016 in Toronto, Canada. Prince Harry is in Toronto for the Launch of the 2017 Toronto Invictus Games before heading down to Miami and the 2016 Invictus Games in Orlando. (Chris Jackson/Getty Images)

Soon after his tour ended, he was watching the U.S. Warrior Games—a multi-sport competition for wounded veterans—and realized the difference that sport made in the soldiers’ recovery. Yet there were only a few hundred spectators. “Surely, it could be better,” he recalled thinking. So Harry developed the idea of an international version open to wounded, injured and ill troops and veterans from allied nations fighting with Britain in Afghanistan.

In late 2014, more than 450 competitors from 15 countries competed in a variety of adaptive events ranging from sprints and swimming to indoor rowing and power lifting. Tens of thousands of spectators cheered them on. “It showed that veterans didn’t need our sympathy but a chance to play meaningful roles in society again,” the prince told his Toronto audience.

Next year’s Invictus Games will put Canada in an international spotlight during an important year. “2017 will be your chance, on home soil on this most auspicious year,” Harry said, referring to the 150th anniversary of Canada and the 100th anniversary of the battle of Vimy Ridge. “Cheer on the custodians of that proud history.”

The 2016 games, which start this weekend in Orlando, Fla., have some high-profile supporters, including President Barack Obama and Michelle Obama, who recently engaged in light-hearted banter with Harry (with his grandmother, the Queen, in a cameo role) to draw attention to the games.

Bruno Guevremont, who attended Monday’s launch, was part of an anti-explosives team dealing with IEDs in Afghanistan. Diagnosed with post-traumatic stress disorder, he found that rigorous physical activity played a major role in his recovery, so much so that he runs a CrossFit gym in Victoria and serves as Team Canada’s captain.”With physical activity, you get to feel good about yourself right away. You get to accomplish something every day at a time when that may be a hard thing,” he said. He’ll compete in indoor rowing, volleyball and powerlifting. For him, the message of the Invictus Games is simple: “When you’ve just got out of the military, you’ve been injured and having a hard time, you can once again represent your country and feel good being on the world stage.”