Prince Philip may be slowing down, but he’s not bowing out

The Duke of Edinburgh will turn 96 in June, and his energetic schedule was no longer realistic. Today’s announcement merely confirmed the inevitable. 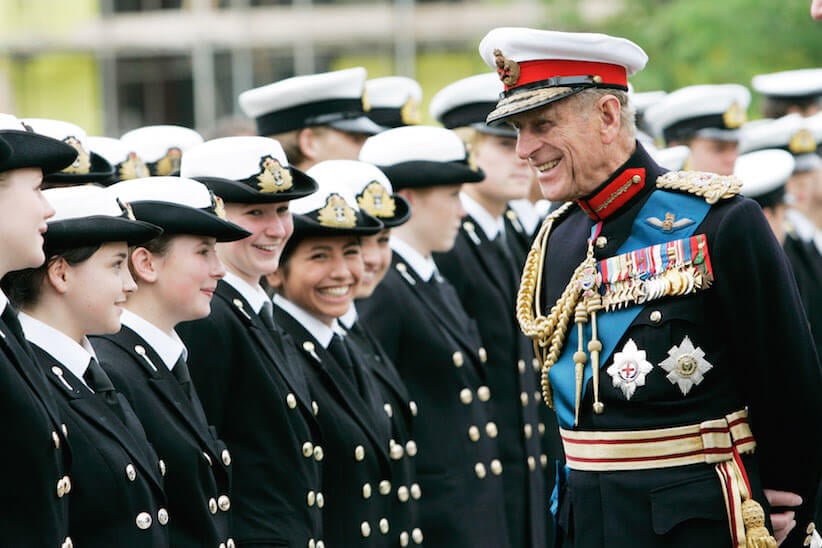 Prince Philip, Duke of Edinburgh meets students from Pangbourne College outside the Falkland Islands Memorial Chapel where he attended a service to mark the 25th anniversary of Liberation Day, June 14, 2007 in Pangbourne, England. (Photo by Tim Graham/Getty Images)

Talk about an exit. When the Daily Mail announced that Queen Elizabeth II had called a “highly unusual emergency meeting” of her entire household, the media exploded with concern, and rumours. At 8 a.m. this morning, the British tabloid  The Sun screamed “Prince Philip dead at 95, how did the Duke of Edinburgh die, etc etc.”

Hi @TheSun. Not sure that's supposed to have been published... pic.twitter.com/bBJHuA0iWl

The unfinished end of that headline suggested an editor jumped the gun and pressed the wrong key on a prepared obituary. It was hastily recalled.

His Royal Highness the Duke of Edinburgh has decided that he will no longer carry out public engagements from the autumn of this year. In taking this decision, The Duke has the full support of The Queen.

Prince Philip will attend previously scheduled engagements between now and August, both individually and accompanying The Queen. Thereafter, The Duke will not be accepting new invitations for visits and engagements, although he may still choose to attend certain public events from time to time.

The Duke of Edinburgh is Patron, President or a member of over 780 organisations, with which he will continue to be associated, although he will no longer play an active role by attending engagements.

Her Majesty will continue to carry out a full programme of official engagements with the support of members of the Royal Family.

The statement may have come as a bolt from the blue, but it wasn’t entirely unexpected. After all, Prince Philip will turn 96 in June. His health hasn’t been particularly good in recent years, marked by a series of hospitalizations for heart surgery and a bladder infection. In December, everyone worried when the Queen and Prince Philip picked up heavy colds. While Philip bounced back in a few days, the Queen stayed out of the public’s eye for nearly a month.

The announcement’s timing is likely because of the pattern of his schedule in 2017. The year started off with its usual slowness: Prince Philip spends his extended winter holiday with the Queen at the royal family’s Sandringham Estate. As per tradition, they don’t take the train back to Buckingham Palace until after the anniversary of her accession on Feb. 6.

After that, his schedule is usually packed. This year, however was different. 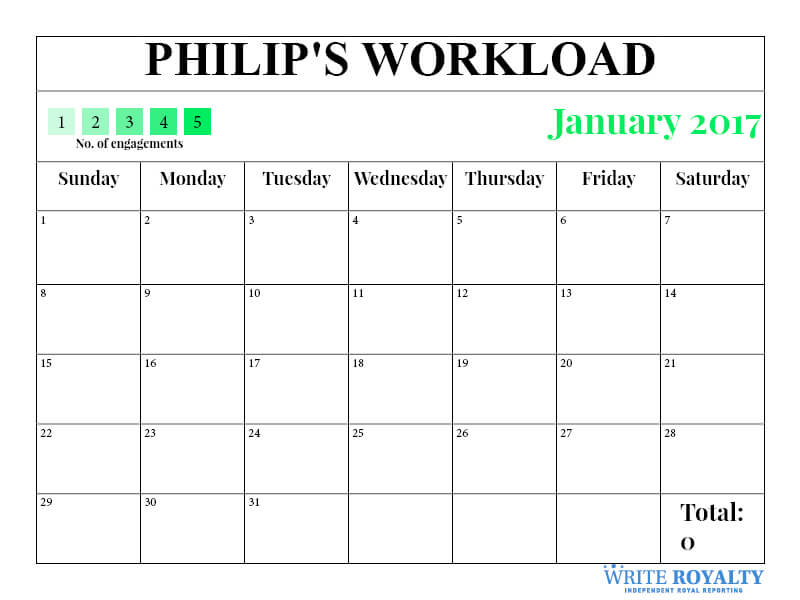 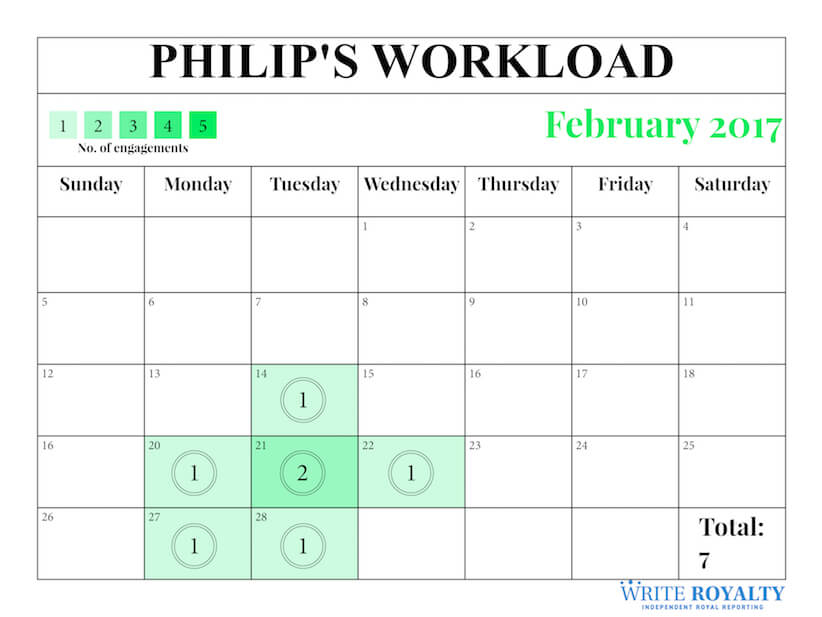 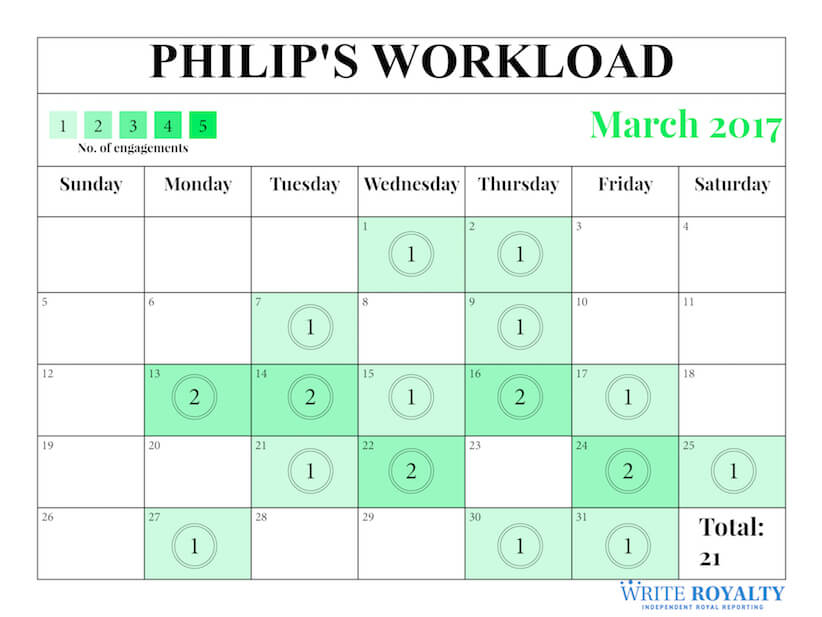 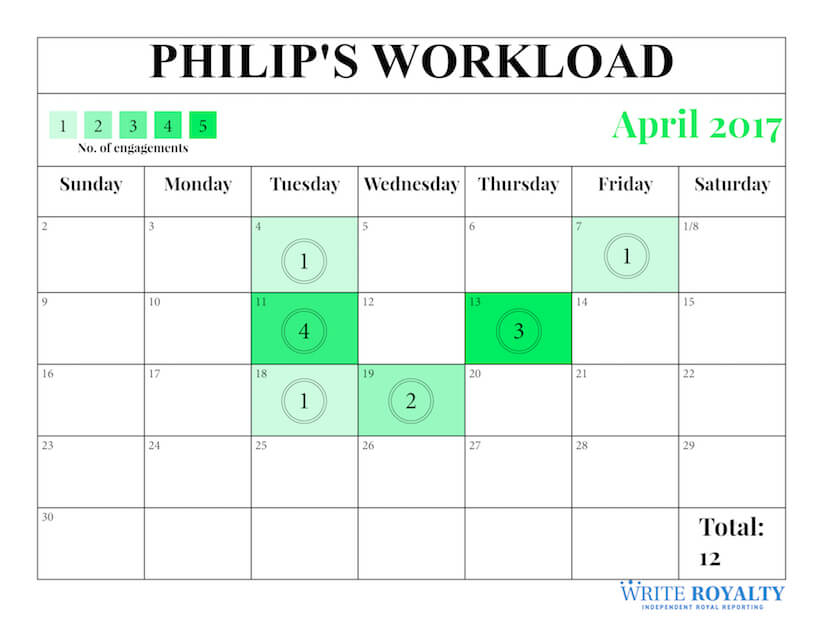 The contrast between March and April is particularly striking. Prince Philip ramped up his workload in March, undertaking more and more engagements. Then, in April, he sharply curtailed his efforts in the middle of the month, undertaking only three engagements after Easter Sunday.

Prince Philip just couldn’t continue as he’d done for decades and decades. He’d invariably cancel an engagement, which would not only disappoint invitees but spawn headlines around the world.

When Philip married then Princess Elizabeth in 1947, he knew it was a job for life. Literally. He took to royal duty with a gusto that reshaped how the royal family works. He created the Duke of Edinburgh Award scheme, a program of voluntary self-development activities for young people that is now a huge global affair. He helped found the World Wildlife Fund, a leading conservation and wilderness protection agency. Even his prodigious written correspondence was mined. Among the 14 books he authored was an intriguing exchange of letters about evolution, fundamentalism and morality with Michael Mann, then dean of Windsor Castle.

But in the last few years, age slowly caught up with the energetic Philip. His workload, which was above 600 engagements a year when he hit the usual retirement age of 65, had slowly, inexorably declined. Last year, he did 219 engagements.

As Queen Elizabeth II said in 1997, to mark their 50th wedding anniversary: “He is someone who doesn’t take easily to compliments. He has, quite simply, been my strength and stay all these years, and I, and his whole family, and this and many other countries, owe him a debt greater than he would ever claim or we shall ever know.”

Patricia Treble has been a royal watcher for more than 15 years, and she now writes at WriteRoyalty.com. Find her on Twitter at @WriteRoyalty.