Prince William was called 'work-shy.' Then things got really nasty. 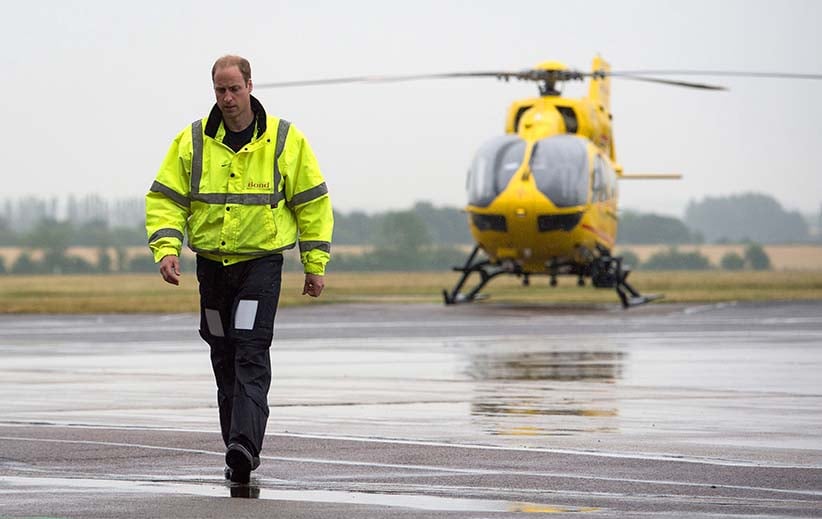 Prince William, The Duke of Cambridge, as he begins his new job with the East Anglian Air Ambulance (EAAA) at Cambridge Airport on July 13, 2015 in Cambridge, England. The former RAF search and rescue helicopter pilot will work as a co-pilot transporting patients to hospital from emergencies ranging from road accidents to heart attacks. (Stefan Rousseau/Getty Images)

If the current brouhaha enveloping the royal family has revealed anything, it’s that Prince William may be a git. Certainly, his media folk are looking awfully foolish.

It all started last week, when the tabloids aimed their cannons at Prince William and opened fire. The Sun launched the first salvo, laying into him for undertaking his first royal engagement a mere six weeks into 2016: “While most of us have been grafting for well over a month, his first official engagement came 47 days into the new year.” Soon, he was under withering fire. A Mirror columnist labelled him a “work-shy petulant prince.” The Mail piled on, calling him the “most reluctant—and truculent—of royals.” Poof went his reputation as the dynamic future of the Windsor clan.

The attacks showcased troubling royal work statistics. In the past, his low number of engagements was excused as he was in the military, and thus his life wasn’t his own. But William left full-time Royal Air Force duties in September 2013, around 2½ years ago. Instead of going into full-time royal duties, he trained for, then took a job with, the private sector, becoming a helicopter pilot for Bond Air Services, under contract to East Anglian Air Ambulance. He moved with Kate into a sprawling country estate in Norfolk, where they plan to raise their two children, George and Charlotte. Unfortunately, that family-first focus came at the expense of duty. Not a good thing in a family that believes they must be seen to be believed.

The lack of royal duty showed in unofficial statistics (created by Tim O’Donovan, and used by everyone). In 2014, William undertook 143 engagements (73 in Britain, 70 overseas). Last year, it was down 15 per cent to a mere 122 engagements (87 in Britain, 35 overseas). By contrast, his 89-year-old grandmother knocked off 341 while his 94-year-old grandfather did 250, more than double William’s duties.

The delightfully assiduous and helpful Tim O’Donovan, of Datchett, Berks, has done it again. Via @timesletters pic.twitter.com/nrhA6GbeLN

Yet those troubling royal statistics wouldn’t have been enough to elevate this beyond the usual tabloid level. That came when the Sun devastated the excuse long given by royal officials—that William works as an air ambulance pilot, thus couldn’t do that many duties. An unnamed source offered all the ammunition the Sun needed: “William’s supporters point out his engagements are down as he was busy with a new job last summer with East Anglian Air Ambulance. And he’s ‘packing in the shifts’ so everything else has to fit in. But a source grumbled to the Sun: ‘He’s hardly ever on shift. He was very enthusiastic to begin with but it tailed off. It’s supposed to be four on, four off but with the Duke it’s more off than on. He had at least four weeks off over Christmas, which has to be staffed the same as normal weeks. It’s fine that he gets a bit of special treatment but it’s beginning to really annoy some people. The rumour is that he’s just a bit bored of it.’ ”

Sensing danger, royal damage control parties (by all accounts under the direction of William and Kate) swung into action—and missed.

On Monday, air ambulance bosses were trotted out to praise William as doing “a very important job,” while also insisting, “We all feel he’s very much part of the team.” A Kensington Palace spokeswoman, who answers to William and Kate, thanked East Anglian Air Ambulance for giving William “the opportunity to carry out his skilled work.” Palace sources insisted he aimed to be “on shift” as a pilot for around 80 hours a month (around 22.5 hours a week), thus conforming with Civil Aviation Authority (CAA) rules.

But those “unnamed palace sources” couldn’t stop talking, and appeared to have blundered into a deep hole. One told Gordon Rayner, chief reporter at the Telegraph, that William was restricted in the number of royal duties he could undertake because “there are mandatory rest days enforced by the CAA, when you’re not meant to go off and do other work because it’s not rest.”

The CAA shot back, saying William’s staff was “confused.” A CAA spokesman said Rayner: “It’s true that you can only work a certain number of hours in any given period, but to suggest that pilots can’t do anything else on some rest days is totally unenforceable. When they are having rest days their time is their own, and they can do what they want, including carrying out royal duties.”

With that cudgel, a small tempest about William’s work ethic became an official royal scandal. Once seen as bringing a refreshing informality and vitality to the monarchy, he’s now a liability as questions swirl over whether the prince truly wants the responsibilities that go with his position as a future king, and how his media people could so mishandle the file. As Kensington Palace figures out how to deal with the mess, it’s a safe bet that lots of descriptors are being tossed around Kensington Palace. Perhaps even “git.”