Rachel Dolezal and 'The Human Stain'—only in reverse 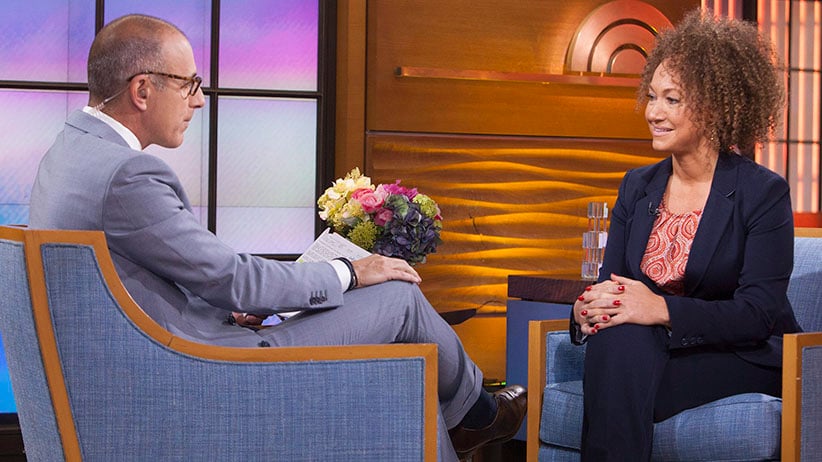 In The Human Stain, a novel by American author Philip Roth, a college professor named Coleman Silk is taking attendance in his class when he realizes that for the sixth week in a row, the same two students have not turned up. “Does anyone know these people?” he asks the lecture hall. “Do they exist, or are they spooks?” When the missing students, who are black, hear about the incident—specifically the wording of Silk’s query—they assume the professor is a racist. (“Spook” is an outdated slur for African-Americans). They take their concerns to the college and an investigation ensues. Silk, meanwhile, maintains that he never met the absentee students and that he used the term innocently, in reference to the students’ “possibly ectoplasmic character.”

“These two students had not attended a single class,” he says. “I was using the word in its customary and primary meaning: ‘spook’ as a spectre or a ghost.” Silk’s explanation, however, isn’t enough for campus activists who quickly brand the professor a racist. His reputation is ruined and his character besmirched. And then the twist: It turns out that unbeknownst to everyone in his life, even to his children, Silk is black himself; he is a light-skinned African-American who has been passing as a white Jewish man his entire adult life in order to avoid discrimination. In other words, he is the true spectre in the story.

The Human Stain, published in 2000, posed a thousand interesting questions about race and identity. Can Coleman Silk be racist if he is black himself? Or, conversely, why should his “true identity” matter when he passes as a white man and lives as one, thereby benefiting from nearly every privilege that whiteness entails?

Recently, in a truly bizarre turn of events, a version of these questions has been asked again, not about a black fictional character who passes for white, but about a very real white woman who poses as black. You could call it The Human Stain in reverse. I’m talking about Rachel Dolezal, the 37-year-old American “Africana studies” instructor who made international headlines this month when she resigned from her post as NAACP chapter president in Spokane, Wash., after her parents revealed Dolezal isn’t who she says she is. Though she was born white as snow (in childhood photos she has long blond hair, pale skin and blue eyes), Dolezal has been posing as African-American for years. According to her parents, Dolezal, who has several black (adopted) siblings and black children of her own from a previous marriage to a black man, began “identifying” as black in 2007. Not only was her working life and activism bound to a black identity, she tried to look the part too, crafting a remarkably believable afro from her once pin-straight, white-girl locks. Her complexion also began to darken (asked on the Today show if she had done anything to alter the colour of her skin, Dolezal replied: “I certainly don’t stay out of the sun.”)

An artist and former Howard University student (amazingly enough, she sued the historically black college unsuccessfully in 2002, alleging she was discriminated against for being white) Dolezal said she has identified as black since early childhood, a claim her parents dispute.

“I was drawing self-portraits with the brown crayon instead of the peach crayon, and the black curly hair,” she told NBC’s Matt Lauer. “I was socially conditioned to not own that, and to be limited to whatever biological identity was thrust upon me and narrated to me.”

Dolezal’s language is oddly familiar. She describes her faux-black identity (now parodied on Twitter as “transraciality”) as a transgender or gay person would describe feeling out of sorts in childhood. She may be one of a kind—an exceptionally wacky outlier—but she has adopted the language of the genuinely oppressed to make her plight appear sympathetic and legitimate. At this, she has failed spectacularly.

Coleman Silk chose to live as white in order to avoid discrimination. Dolezal, on the other hand, appears to have sought out discrimination. There is something uniquely unsettling about a person who dresses up as a member of a historically brutalized group in order to play the role of saviour. Dolezal has made several unfounded claims of prejudice over the years: she seems to relish not only posing as a black artist, but as an impassioned civil rights activist. Of course it is very likely, as some have argued, that she did a lot of good in disguise. But it’s also easy to see why her story makes us cringe. For most, activism against bigotry is a necessity—not a fetish.