Meet the Spyder: the boomer motorbike with a third wheel and plenty of cushion

The line of odd-looking vehicles snakes slowly into the parking lot of the gas station in an exurb of Montreal every Friday night, less procession than conga line, all chrome, flashing lights and leather, country music blasting from vehicle speakers. They park 10 vehicles wide and three deep; the wind shifts as the riders descend from their charges and bathes them in the smell of fry grease from the chicken joint next door. Helmets come off, guts relax, grey hair is pushed back into place.

They are a motorcycle crowd without the motorcycles. Talk revolves almost exclusively around the Spyder, the three-wheelers on which they arrived, and which more and more proud Baby Boomers have spent upwards of $40,000 to buy and trick out. A Spyder looks like a backward tricycle, two wheels in front, one in the back, with a motorcycle-style windshield and snowmobile handlebars. Perhaps most important, it doesn’t have a kickstand. It doesn’t need one. Unlike the Harleys whipping by on the highway, Spyders stay upright when not moving.

Robert Pion, who’d just ridden in from Florida, kvetched about how he didn’t have time to polish his filthy fenders. André Gaudreau said he’d built a towable camper, complete with bed and chemical toilet, that’ll be ready next summer. Joe Marro’s American friend lent him his customized Spyder and Marro’s fellow Spyder owners gawked and cackled as he operated with three remote controls an array of multicoloured lights—a veritable discotheque affixed to the thing. Save for three people, everyone is over the age of 50.

The Spyder is in many ways the Baby Boomers’ answer to an inevitable question: How does a generation brought up on the motorcycle mantra of freedom, individuality and the-world-is-our-oyster entitlement adjust to one’s own failing body? Others have tried to answer. Boomers who prefer bicycles but whose wrists, backs and knees are too sore for two wheels can have a seat in Laid Back Cycle’s $5,000 recumbent bike. The rider quite literally sits on a throne surrounded by three wheels, with handlebars on either side like two gigantic remote controls in the rider’s hands. “No need to balance!” reads the promotional copy. Since 2008, Harley-Davidson has produced a three-wheeled motorcycle. Leather- and accessory-laden, the $36,000 “Tri Glide Trike” looks like an armchair on wheels. For decades, a handful of aftermarket companies have been adding a third wheel to the massive Honda Goldwing, to much the same effect, and inspiring a similar devotion.

The Spyder, though, is the first purpose-built three-wheeler marketed almost exclusively to Boomers. Manufactured by Bombardier Recreational Products (BRP), the Spyder is inherently more stable than motorcycle-based trikes. It takes all that is appealing about motorcycles (open air, big noise, fast acceleration), adds a third wheel and a host of car-like safety features, and sells for roughly the price of a decently stocked Toyota Camry to a generation suddenly worried about its own limitations.

And, boy, has it worked. Sales of the Quebec-built machine, which is sold throughout North America and across the pond, went up by 45 per cent in 2011, thanks largely to BRP’s introduction of its RT model, a chrome- and leather-swathed take on the three-wheeler that starts at $25,000 and reaches well into BMW territory with all the extra bling. According to BRP, sales are strongest in its native Quebec and Ontario; the U.S. market is slower going, battered as it is by recession.

The Spyder came along at an auspicious time, according to Pam Danziger, author of Why People Buy Things They Don’t Need. Demographically, Baby Boomers dominate the luxury market. They’ve already crammed their houses with spa-quality soaker-tubs and restaurant-grade cooking ranges, Danziger says. “And now they are looking for experiential things. The Spyder is a perfect example. It’s completely and totally impractical, but it serves a need. It’s safer than a motorcycle. You don’t even need balance to ride one. And no self-respecting thirtysomething would be caught dead on it”—although 36-year-old Canadian actor Ryan Reynolds was photographed with his in Los Angeles last week, which could help to change the Spyder’s image.

The marketing of the Spyder is a wink-nudge tribute to the open road—a Viagra ad without the “ask your doctor” finish. One soft-focus ad features grey-hairs gearing up and hitting the highway to the tune of Spencer Davis Group’s Gimme Some Lovin’. At a rest stop, a gnarly-looking biker nods impressively at the look of the thing. This doesn’t actually happen in real life. On the road, motorcyclists rarely drop the two-fingered wave to a Spyder. Sometimes there is a wave, just with one finger less.

Scenes from a Spyder rally 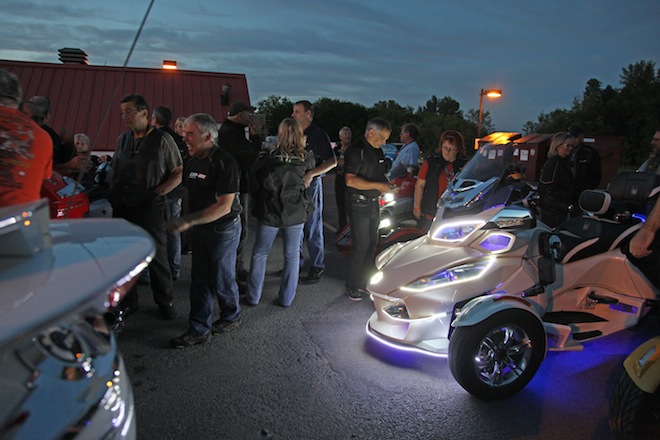 The vast majority of the 60-odd Friday night Spyder riders are former motorcyclists. Denis Papineau bought his first Spyder after owning 16 motorcycles throughout his 60 years. Knee surgery meant dangerous wobbles at traffic stops; after the last one, his wife threatened to stop riding with him. “We went to the BRP dealer that afternoon,” he says.

A surprising number of first-time women riders figure among the Friday night crowd. “I would never ride on two wheels,” said Janine Campbell, a diminutive 55-year-old who has seen most of Quebec on her Spyder.

BRP, Harley and the like certainly aren’t alone in appealing to the muscled nostalgia of the Baby Boomer generation. In 2009, General Motors reintroduced the Camaro, a two-door muscle car available with a V-8 engine the size of a small elephant. Not to be outdone, Chrysler brought back its Challenger in 2008, after 25 years. The original incarnations of both cars were the Boomer generation’s first big indulgence and a casualty of its frugal years, when kids needed to be sent to college. Much like the Spyder, the new versions are heavier, safer and easier to drive than their predecessors.

Sellers of recreational vehicles aren’t the only ones making a bid for discretionary Boomer dollars. Boomer tastes may be influencing everything from retirement homes to the restaurant industry. A recent report by the New York-based NPD market research firm notes how the economic downturn severely hampered the spending power of much of Generations X and Y and the Millennials—but not Boomers. Those aged 55 to 64 visited restaurants an average of 220 times in 2012, the highest of any bracket. According to NPD, eateries are adapting by changing their menus to include more mix-and-match items, sweeter desserts and spicier foods—all aimed at waking the dulled Boomer palate. Even the menus are getting bigger, since reading glasses can only do so much. Meanwhile, a British parliamentary committee recently suggested “rock ’n’ roll retirement homes” as a way of coaxing reluctant Boomers into the country’s publicly funded pension home system.

But the Boomer generation is nothing if not practical—it gave us Woodstock, but also Reagan, after all—and the Spyder is an offshoot of the very pragmatic realization that, at a certain point, motorcycles don’t make much sense. Sure, some have been made safer in the last decade by ABS brakes, tire-pressure indicators and, in the case of the Honda Goldwing touring bike, an airbag. But anything that depends on its own momentum to remain upright—and which falls victim to gravity at the stoplight—is dangerous by design.

The Spyder at once makes it safer to tear around without a roof over one’s head while maintaining some of that rebel allure. In the Boomer world, the motorcycle didn’t die; it just grew another wheel, added many pounds and became really, really easy to drive. A twist of the throttle brings swift, stable, consequence-free speed. It turns much like a snowmobile. Brake quickly, and the Spyder helpfully downshifts for you. Blast into a corner too aggressively, and it cuts the throttle to prevent a spin-out. Call it a Boomer safety net. It’s an ethos that’s less “Helmet laws suck” than “My other ride is a Jet Ski.”

Asked if he misses that weirdly addictive thrill of angling a motorcycle into a corner and having the foot pegs kiss the asphalt, man and machine in perfect tandem, Denis Papineau nods and says he does. But his wife is happy, and he doesn’t have to worry about balancing her and a 450-kg machine on a bad knee anymore. “I miss the Harleys,” he says, grinning at his shiny silver Spyder. “But we all have to make sacrifices in life.”