How we remember the Battle of the Somme

The Battle of the Somme's horrific futility dominates our memories, yet there are aspects of the battle that pointed, however weakly, to how and why the war would finally end 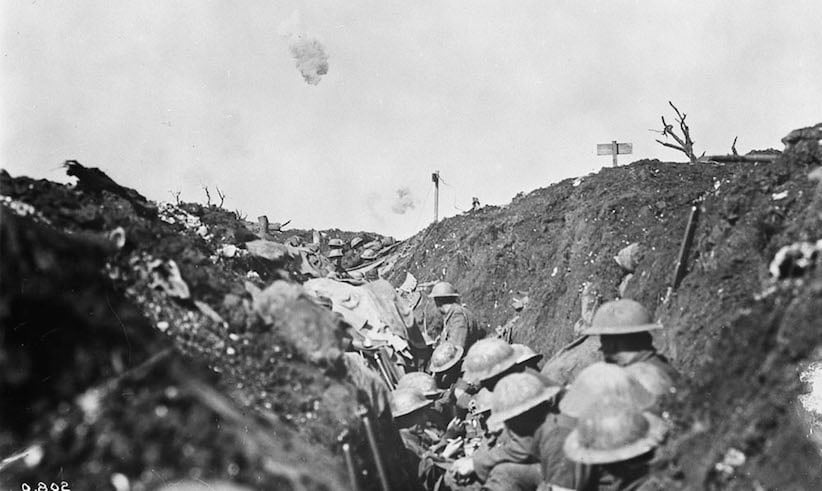 Shrapnel bursts over a reserve trench in Canadian lines during the Battle of the Somme, France in 1916. W.I. Castle/Library and Archives Canada

For much of what was then the British Empire, including Newfoundland, centennial commemoration of the Battle of the Somme was always going to centre on its bloody opening day on July 1. But Irish historian Keith Jeffery, with an eye to the all-but-ignored fact that the Somme ground on into November, chose to highlight it in September in 1916: A Global History, his month-by-month account of the Great War year from which there was no turning back to the pre-war world.

For the entire five-month struggle, the British and French fought along a stretch of the River Somme barely 30 km long, while sustaining 623,000 casualties, of whom 420,000 were British. The Germans, even in less costly defence, suffered up to 580,000 dead and wounded. Even so, the Allied lines never advanced more than 15 km, the single statistic that raised the Somme to iconic status, the battle to stand for all futile First World War battles. In the English-speaking world, where the Great War has become ever more mysterious over the years, a pointless suicide pact between European empires, the Somme has held that symbolic place ever since.

That’s precisely why Jeffery wanted to look at it in the middle of the agony, when the original optimism had long gone, but the armies—from generals to privates—continued to press on. September thus becomes one of the few months the historian devotes to ordinary soldiers’ experiences, as well as to the ways the Somme became synonymous with memory across the British Empire and what were once called its “white” dominions. Canadians, like every other source of manpower in the empire, played their role, but at places and times (Thiepval, Delville Wood) that have not equalled Vimy or Ypres as commemoration icons. For Newfoundlanders, who were not yet Canadians, and were decimated on the infamous opening day—when they were the only Imperial troops present—it is very different. A great bronze caribou, the emblem of the Newfoundland Regiment, stands on the highest point overlooking the slope where so many of the regiment perished. Likewise the South Africans erected their memorial at Delville Wood, while Australians—who actually lost more men at the Somme in seven weeks than they did at better-remembered Gallipoli in eight months—and the New Zealanders also built commemorative structures. Soil from the Somme is sprinkled in the grave of Australia’s Unknown Soldier, interred in Canberra in 1993.

Not far away is the Ulster Tower, commemorating the 36th Ulster Division, a mainly (albeit not entirely) Protestant formation that lost 5,500 of its 15,000 men on the first two days of the Somme. After the war, Ulster sacrifices became part of the “creation narrative”—its undying loyalty—for the part of Ireland that stuck with Great Britain after the war. In that, as in much else, the embryonic Irish Protestant statelet differed from the overseas dominions, whose memorials became focal points for their growing sense of nationhood.

Those stories, which dominate our image of the Somme, miss a lot of technical military history, Jeffrey notes, aspects of the battle that pointed, however weakly, to how and why the war would finally end. The Somme saw the first use of tanks, which would eventually restore some mobility to the battlefront, and halting progress in “creeping barrages,” timed changes in artillery bombardments that allowed infantry to keep progressing without facing enemy machine-gunners.

And the Somme, according to historians, also demonstrated that relentless attrition—the very tactic that makes the Somme iconic to us for its futility—was starting to work. Something usually ignored in Allied historical writing is the effect of the Somme on the enemy, who found the pressure nearly intolerable. When, in early 1917, Germany weighed the question of unrestricted submarine warfare—a fatal step that would eventually doom Germany by bringing the United States into the war—one argument in its favour came from General Erich Ludendorff, by then virtually military dictator of Germany. Turning the subs loose would, if all went the Germans’ way, create food shortages and other shortfalls in Britain, keeping soldiers at home and strangling munitions production. All necessary, said Ludendorff, because “we must spare the troops a second Somme.”