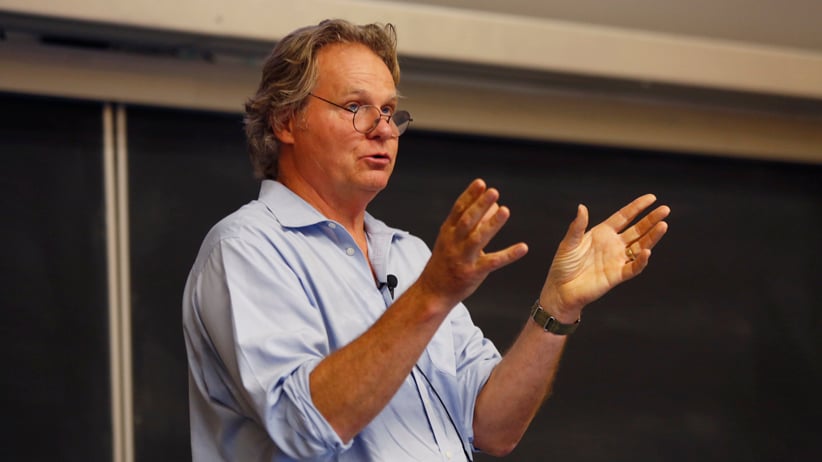 Wade Davis, Canada’s real-life Indiana Jones, launched his academic career with a bang this week, delivering a sensational lecture at the University of British Columbia that left his first-year anthropology students slack-jawed in disbelief.

The National Geographic explorer-in-residence, with no notes to guide him, spoke for an hour and twenty minutes Thursday, fully half an hour after the bell.

Typically, the end of class triggers a stampede to the exits, as students rush to their next class. But no one budged yesterday afternoon at UBC’s Woodward’s Hall. The students, most aged 17 and 18, stared, their gazes fixed, their phones and tablets forgotten. They knew they were witnessing something special.

Davis is a youthful-looking 60, with wavy, grey-blond hair spilling from his crown in two messy waves. His tailored black jeans were on the tight side; his pale blue shirt unbuttoned, a nod to the late-summer heat.

After his lecture, students rushed to the dais, wanting to shake his hand—though few knew what, exactly, they wanted to tell him.

“I just want to thank him, I guess,” said Israel Olmos Lau. The first-year geophysics student from Toronto was so moved, he’d decided, on the spot, to switch majors, to anthropology.
Davis—writer, photographer, filmmaker, anthropologist and author—has acquired a resumé that reads something like a character from an Ian Fleming novel. Indeed, there’s something a little Bond-like about the Harvard University Ph.D., who has lived with and studied dozens of cultures threatened by extinction, and written almost 20 books on everything from Haitian voodooism to his travels to the headwaters of the Amazon, home to some of the world’s most isolated tribal people.

Davis’s style seems more professional than professorial. His hands danced before him, emphasizing the more compelling points. During a single, short pause, he rolled onto the tips of his toes, as if to catch himself. His speech was so rapid-fire that note-taking was impossible, something he’ll have to adjust to in the coming weeks.

But none of this mattered yesterday. And how could it? Words poured from Davis in a poetic jumble. Polynesia is not a country, but “tens of thousands of islands flung like jewels upon the Southern Sea.” Language is “the flash of the human spirit, the vehicle through which the soul of each particular culture comes into the world.”

The student seated next to me literally gasped when Davis explained that Polynesian mariners can name 350 stars in the night sky, that in darkness, they navigate by reading the reverberations of waves across a boat’s hull, “knowing full well that every island group in the Pacific has a unique refractive pattern that can be read with the same perspicacity with which a forensic scientist would read a fingerprint.”

This most untraditional professor, who’d never held a teaching job in his life—in fact, this is the first job he’s ever had—is, in reality, a most traditional professor. Like a village elder who’d acquired more knowledge and experience than anyone else, he was imparting all he knew to the tribe’s youngest, its most ignorant, its most open.

And Davis knew precisely how to engage them. He will teach them to shoot poison darts made from the tips of Piranha jaws. He will share the lessons imparted to him by “psychotic” shamans.

Throughout, Davis kept returning to two, central messages. First, that every culture is a unique answer to a fundamental question: What does it mean to be human and alive?
And second, that the societies he was describing are not the least bit primitive.

“Sometimes you feel sorry for these people for what you perceive as their ignorance,” said Hannah Knight, 18. Knight, who was raised in England and the Philippines, understood, all at once, “how culture defines the way we see the world.”

To hammer home his point, Davis pointed to Australia’s Aboriginals. The reason they didn’t improve upon their lot, he explained, is simply that they didn’t want to. “This was the dream. It wasn’t about progress; it was about stasis. The purpose of life wasn’t to change; it was to keep the world just as it was at the time of creation.”

Whether this most peripatetic prof can actually handle the tedium of academic life remains to be seen. Introductory courses are, to most academics, like Dante’s ninth circle of hell. And a political career will be his follow-up act, he has all but admitted.

Davis says his philosophy, borrowed from Picasso’s adage, has always been: If it works, it is obsolete. “Just when I get good at something, I take on something else.”