Retirees are taking the plunge into solo travel—and loving it

These solo travellers don't let age hold them back 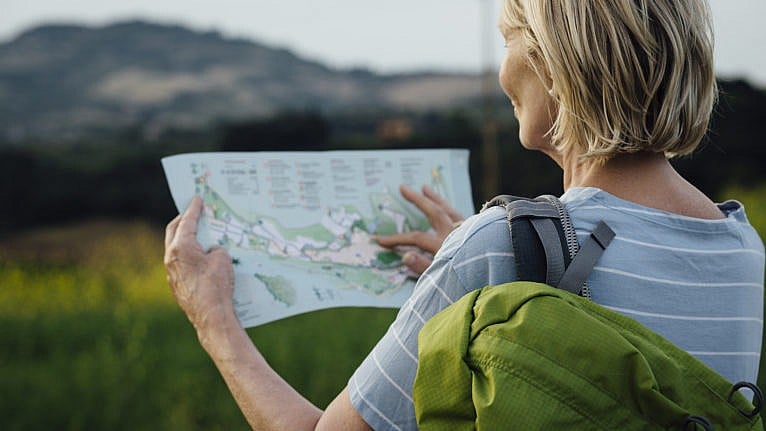 Five years ago, Lynda Chester was on a trolley in San Antonio, Texas, when a white-haired man with an elaborate moustache and a walking cane engaged her in conversation. He wanted to know what she did, where she was from and if she had kids. They had a great chat. “He looked just like Colonel Sanders,” says Chester, “and he invited me to a town hall meeting because he thought I’d find it interesting. He was incredibly generous with his time and just wanted to share his city with me.”

Chester, a 72-year-old from Welland, Ont., is convinced the memorable encounter would never have occurred had she not been travelling alone—although visiting San Antonio solo wasn’t originally her plan. In 2017, Chester retired from her position as a placement officer for college nursing students. She was looking forward to having more time to travel, something she’d done all her life, always with others. But, this time, the friend she was planning to take off with had to cancel at the last minute. Chester thought, “Well, I’ll just have to go by myself.”

Lorraine Simpson, a travel consultant based in Fonthill, Ont., has seen a marked increase in the number of retired travellers taking solo trips. “Some are a little nervous about doing it on their own, but once they go, they start planning their next trip as soon as they get home.” In 2018, a Booking.com study of 20,500 travellers worldwide found that 40 per cent of those aged 55 to 64 had taken a solo trip in the past year. Industry research also suggests that the future of solo travel is decidedly female—half the intrepid clients of Overseas Adventure Travel, a travel company geared to those over 50, are solo travellers, and 85 per cent of those solo travellers are women.

At the retirement stage of life, more people are single, whether through loss or divorce, which is one reason for travelling alone, says Janice Waugh, founder of the Solo Traveler blog. In many cases, retirees simply prefer to go it alone. “Exploring the world on your own keeps you dynamic and challenges you to meet new people and make your own decisions,” she says. “You may no longer have the validation you once got from employment, but you can still get it through travel.”

Then there’s the fact that having a travel companion can sometimes lead to too much enjoyment-zapping compromise. When Chester travelled with other people, she’d worry about whether they were having a good time. One friend would plan their itinerary days in advance, down to the minute. “When you travel alone, you get to please yourself for once, and you do things you wouldn’t do if you were with another person,” she says.

In San Antonio, she wandered into a wonderful western museum with saddles in glass cases and floors made of cowhide, just because there was no one beside her to say, “Why would we go in there?” She also wound up in the oldest bar south of the Mississippi, where a young server sat with her during her break and told her all about her love life. “You don’t get that if you’re with someone else; everyone just ignores you,” Chester says.

All the same, joining a small tour group can make meeting people much easier. A few years ago, after her divorce, Beryl Zoratti booked a river cruise in Russia. It was the first time she’d ever travelled alone. “My kids were frantic,” says the 74-year-old retired rancher from Pincher Creek, Alta. “But I discovered that people will go out of their way to help you and are genuinely interested in you. I found that really nice.”

Simpson, the travel agent, says that one of the biggest concerns solo travellers have is dining alone. Zoratti, who was one of the two solo travellers on the cruise, got around that by asking others if she could join them. “I’d think, ‘Oh, those people look nice,’ and I’d approach them—they always said yes. It was hard the first time, but it got easier, and it was a great way to meet people. It got me out of my comfort zone; in fact, my comfort zone is a lot bigger now.”

Chester doesn’t mind dining alone. “I never take a book,” she says. “I like to look at what’s going on around me.” She’s less comfortable returning from a restaurant after dark. “I try not to put myself in stressful situations. I book flights that arrive in the daytime so I’m not navigating an unfamiliar city at night, and I’ll ask for help if I need it. I once asked a young man for directions. He took his headphones off and walked me all the way to my hotel.” Chester also uses Google Street View to scout her hotel in advance. In San Antonio, she discovered that if she turned left from her hotel, it wasn’t the best area, but if she turned right, it was lovely.

Since becoming a solo traveller, Zoratti has learned to be a better planner. “And now that I know I can figure out any problem that might come up, I don’t get frantic if something doesn’t go my way.” For first-time travellers, she recommends starting small. “You don’t have to go far. Just get in your car and head north, south, east or west and stay somewhere new for a couple of days.” When you’re ready to go further afield, Simpson suggests finding an agent who specializes in solo travel. “They should take the time to find out who you are so they can match a trip to you, not just ask, ‘Where do you want to go and what’s your budget?’ ” she says. And beware of single supplements (fees charged if you book a room that would otherwise hold two people). On Solo Traveler, Waugh only features spots that offer no, or low, single supplements.

Waugh recommends joining a tour for five days, then staying on by yourself for a week. “You’ll get an introduction to the culture, figure out the currency and language, and get the best of both worlds.” If you’re new to a city, join a free walking tour to get oriented or build a trip around a hobby you enjoy, like bird-watching, hiking or cooking, where you’ll meet people who share your interests. Above all, she says, be patient with yourself. “No matter where you go, you’ll discover how resilient you are and return feeling stronger and more capable than when you left.”

Chester is already planning her next solo adventure. First stop: Costa Rica. After that, Ireland. “When I get back from a trip, I feel a little thrill in my chest. I did this, I did it by myself, I had the best time—and I know I’ll remember it forever.”