Review: The Watchers: A Secret History of the Reign of Elizabeth I 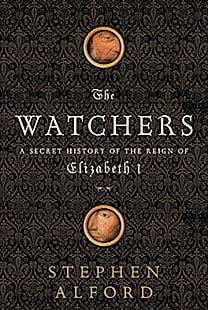 Elizabeth I was the Gloriana, the virgin queen who reigned over England’s Golden Age, the Renaissance of Shakespeare, Sir Francis Drake and Sir Philip Sidney. Yet behind that beautiful facade, her 45 years in power were dogged by threats of invasion, treason and treachery. Her Catholic enemies, both domestic and foreign, were determined to rid Europe of the woman deemed a bastard heretic unworthy of the throne. Her closest advisers, especially spymaster Francis Walsingham, spent considerable time, and a large chunk of the treasury’s gold, stamping out any threat to their sovereign. He planted loyal Protestants within Catholic exile groups as couriers so he could intercept their communications, and even knew about one invasion force’s plans before its top commanders did. Using letters and documents that have somehow survived from the era, including amazingly frank communications from Walsingham or his minions, Alford weaves an exciting tale of intrigue, mystery and danger from the spies’ and traitors’ points of view. There’s Charles Sledd, an agent who infiltrated priests’ colleges, writing detailed descriptions of Jesuits about to be smuggled into England, allowing them to be hunted down. Thomas Phelippes, one of Walsingham’s best code breakers, carefully lays out evidence for the treasonous guilt of Elizabeth’s cousin, Mary, Queen of Scots. There’s even a letter to Elizabeth in which William Parry, a rather hapless spy turned politician and would-be assassin, tries to explain his actions: “Your Majesty may see by my voluntary confession the dangerous fruits of a discontented mind.” Against all odds, the spymaster, his agents and successors proved successful. In 1603, Elizabeth died of natural causes in her own bed. Her successor was the son of her cousin, Mary. And, to the dismay of Elizabeth’s enemies, a Protestant.