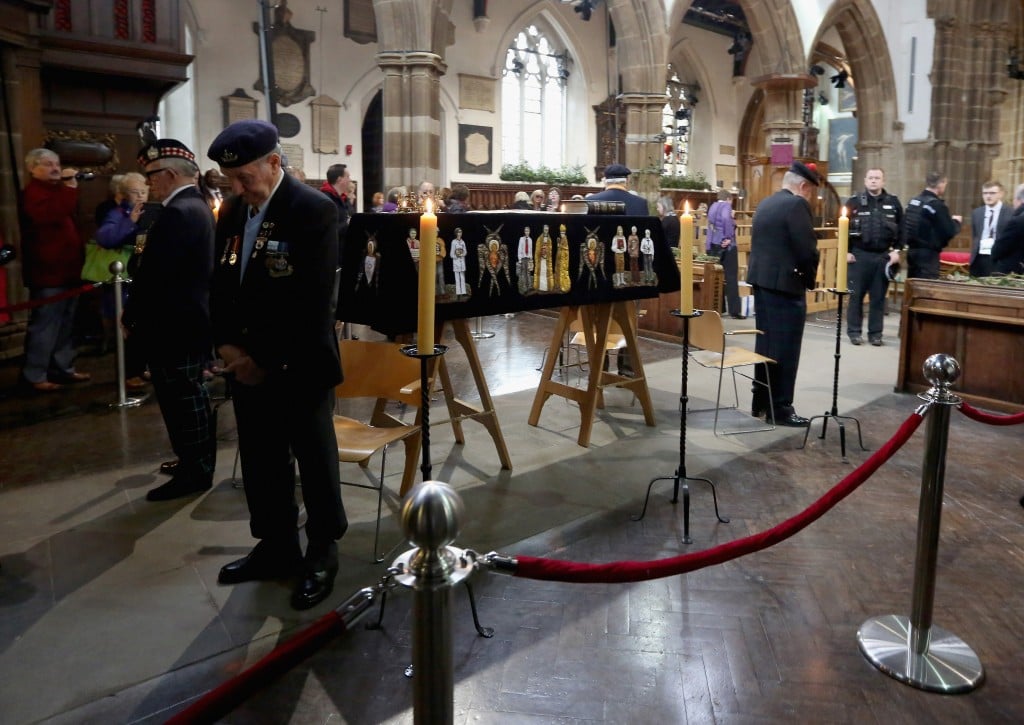 Members of the public queue to view the coffin of King Richard III as it sits in repose inside Leicester Cathedral, draped in a specially embroidered ‘pall’ and adorned with a crown on March 23 in Leicester, England (Getty Images)

On Sunday, tens of thousands stood 10 deep in Leicester, England, to watch as the coffin carrying King Richard III’s remains was borne to the city’s cathedral. On Monday, a queue more than 4,000 long wound through the streets, waiting to pay respects to the last English king slain in battle. Some waited for more than four hours. The cathedral responded by extending its opening time by five hours, asking the people to walk by in silence, so as to not disturb the religious service occurring at the same time.

It’s a remarkable outpouring of respect for a king long portrayed as a misshapen monster. For five centuries, King Richard III lay in an unmarked grave in the city. Until his bones were found in 2012, he was the only English monarch with no known grave or tomb. It’s only recently that a dedicated band of Ricardians, as the pro-Richard forces call themselves, has unearthed new research that presents a more balanced portrait of the medieval king.

Related: The inside story of the Canadian connection to King Richard III

Now his remains lie in Leicester Cathedral, in a coffin created by Canada’s Michael Ibsen, the king’s 17th-generation nephew, whose DNA was used to prove that the bones found in that parking lot were indeed those of the king. (My inside story about Michael Ibsen crafting a regal coffin is here.)

The simple, elegant coffin is now draped by an ornately embroidered pall created by ecclesiastical artist Jacquie Binns. For six months, she did nothing but work on the creation. “I’ve poured absolutely everything into it,” she told me. “I think this is my greatest work.”

Related: An obituary for the oak that would become Richard III’s coffin

The pall, which represents “light after darkness,” is black velvet. On the top is Richard III’s coat of arms, as well as a wreath of roses that ring a crown donated by historian John Ashdown-Hill. The embroidery on the sides represents the past and present. On each are three three panels of three figures, with each panel separated by a seraphim.

Even the way it was draped over the coffin was drenched with symbolism. As the Diocese of Leicester explained:

The pall draped over the lead-lined oak coffin by the descendants of the peers who fought in 1485 for and against Richard at Bosworth. HRH The Duke of Gloucester, patron of the Richard III Society, was in attendance as four peers lowered the pall into place. The House of York was represented by David Manners, the 11th Duke of Rutland and the Hon. Thomas Orde-Powlett MC; the House of Lancaster was represented by the Edward Stanley, 19th Earl of Derby  and William Sackville, 11th Earl De La Warr.

There are two more days for the public to view the coffin containing the remains of Richard III. Then, finally, he will buried near the high altar. 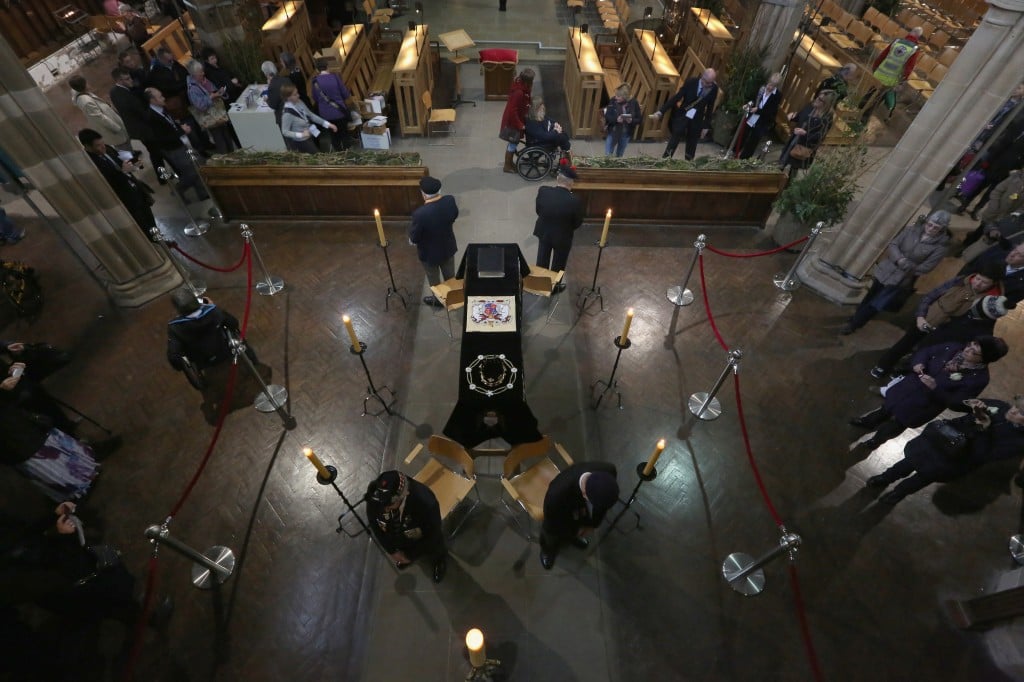