What you need to know about Richard III's reburial

Royal specialist Patricia Treble, our lady in Leicester, gets you set up for the parking lot king's remarkable reinterment on Thursday 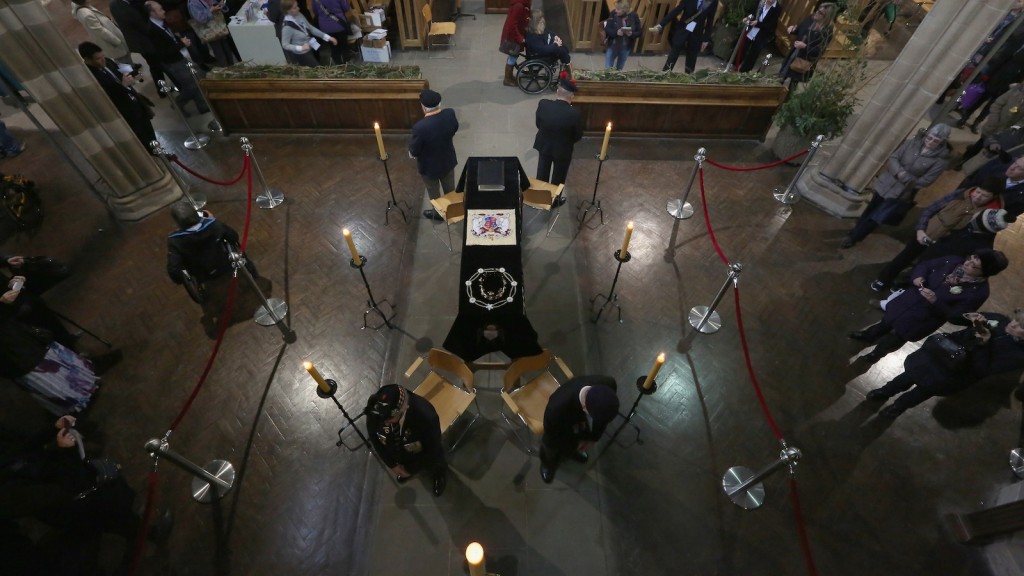 Honour guards by members of the British Legion stand by the coffin of King Richard III as the public view it in repose inside Leicester Cathedral on March 23, 2015 in Leicester, England. (Photo by Christopher Furlong/Getty Images)

Thursday’s reinterment service for King Richard III in Leicester, England is the culmination of five days of services, ceremonies and hours-long queues to see his coffin. Here is what you need to know:

1. Who is Richard and why should we be interested?

This isn’t just the burial of a monarch who died in 1485, but an improbable, at times unbelievable mystery overflowing with coincidences and fascinating characters. And there is a strong link to Canada! Either read my article (here) or go the fast route with the accompanying video (here) to find out more.

Err, yes. But not as early as you think. The service starts at 11 a.m. in Leicester, which is 7 a.m. in the Eastern time zone. (Britain doesn’t change time until Sunday, so there are just four hours between the two time zones.) CBC News Channel’s website is mute on whether it will carry the service live, but it shouldn’t be hard to find online. I have asked on Twitter, but nothing yet. For similar British events, I just tweet the name—Richard III in this case, and the word “live” to find a live feed.

Related: An obituary for an oak: From the backwoods to Richard III’s coffin

3. Will the royal family be there? Any celebs?

Sophie, countess of Wessex, the very fashionable wife of Prince Edward, will be there. She’s apparently dead keen on history. And the royal patron of the Richard III Society, which was instrumental in finding the king’s body, will play a major part. His name is His Royal Highness Prince Richard, duke of Gloucester. He’s a former architect, and more importantly, has the same name and ducal title as Richard III. Since Richard did die 530 years ago, and isn’t related to the current royal family, the Windsor clan turnout is a bit muted.

Actor Benedict Cumberbatch (Sherlock, Star Trek Into the Darkness, 12 Years a Slave) will read a poem commissioned especially for the event. He’s known for his wit (his now-famous ALS ice bucket challenge video is here) and his dignified mien. Since this is a solemn occasion in a small cathedral, Kim Kardashian has not been invited.

4. Why do you keep calling it a reinterment? Isn’t it a funeral?

I made the same mistake, and was very gently but firmly corrected by David Monteith, the dean of Leicester Cathedral. “A funeral is something you do with a body,” he says. “A reinterment is something you do with bones. Also, the dominant thing in a funeral is ‘goodbye’; in a reinterment it’s more of a ‘hello.’ ” Sure, Richard III was hastily buried in a too-short, shallow grave, but it was in the church of the Grey Friars priory. It’s hard to imagine that the Franciscan friars living there didn’t give him a funeral. It was just likely without the pomp and ceremony due a king.

Related: Battle of Bosworth: Hunting for descendants of those who fought

5. I’m still undecided. Anything that can get me to set the alarm clock?

How often do you get to watch the burial of a king? This isn’t any old monarch but a controversial king who has a play named after him by Shakespeare, and whose grave was lost for more than five centuries? The saga is so unbelievable that the plot would be rejected by a book publisher as way too fantastical. Isn’t that momentous enough?

Or follow @Richard_Third, as the dead monarch tweets his own burial. (Of course, I wrote about him.)