A prairie boy, he became obsessed with the sea, and built a sailboat in his backyard before taking it out to British Columbia 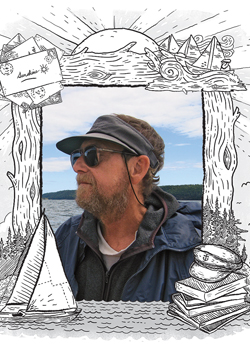 Rick Legallou was born in Regina on Aug. 26, 1950. His parents split up before he was old enough for school, so he was raised by his mother and her new partner, Al, in Swift Current, Sask., a small town that rose like an island on a sprawling sea of prairie.

Rick was a voracious reader. His absorption lent him a dreamer’s disposition; he was introverted and thoughtful, and his young mind churned with imagined adventures beyond the grassy horizon. But his handwriting was notoriously messy. When he was 12, the nuns at his Catholic school made him rewrite his entire notebook to make it legible.

After high school, Rick moved west and enrolled in civil engineering at the University of Calgary, where he met and fell for a girl named Lily. Before long, they moved in together, and Rick dropped out of school. They got married in their mid-20s at a modest ceremony in city hall. Lily wore a simple brown sweater.

Rick took up a series of odd jobs, acquiring myriad handyman skills like woodworking. He repaired punch clocks, and drove a Zamboni at Calgary’s Glencoe Club for a few years.

In 1984, Lily and Rick’s daughter Sunita was born. Around the same time, Rick became obsessed with sailing. He read relentlessly about far-flung ocean voyages, and started yearning for the boundless freedom—and seclusion—of the sea. As Lily supported the family on her schoolteacher’s salary, Rick—the bookish Prairie boy—handcrafted a 26-foot, single-mast sailboat in their backyard. “He wanted to build this boat and sail away,” says Sunita. “He loved my mom and he loved his family, and he wanted to just take us away and see the world.”

Rick’s ship was ready—hand-stitched sails and all—by the time Sunita was 3. He christened it “Sevens” and hauled it to Ganges Harbour, an idyllic cove on Saltspring Island, B.C. Lily and Sunita lived with him there for less than a year; Lily grew tired of her husband’s inwardness, and took Sunita back to Calgary. She and Rick split up soon after. “I think she’d had enough,” says Sunita. “My mom always wanted children, and I don’t think Dad did. I don’t think he was really comfortable doing kids’ stuff.”

With his family on the other side of the Rocky Mountains, Rick started a new life of unadorned minimalism on his boat in Ganges Harbour. He slept below deck in a space too short to stand up in. He kept warm with a wood-burning stove and went to the bathroom in a small tray. Tupperware containers made do as his sink. “He lived on practically nothing,” says Vera Kononoff, a neighbour who would often see Rick drifting along the water in his boat.

Rick became part of a close-knit group of sailors and locals who lived on boats. “He was very independent,” says Rochelle Vadeboncoeur, who lived on a boat near Rick. “He never asked for anything from anybody.” Much of his time was spent on small repairs to his vessel. He also made woodcarvings and intricate rope mats. But most of all, he read whatever he could find, from sea battle stories by Patrick O’Brian, author of Master and Commander, to Four Blondes by Candace Bushnell of Sex and the City fame.

Rick was regularly seen rowing his dinghy to shore, where, in the 1990s, he worked at a photo lab. He later took a job as a night janitor at Moby’s pub. “He was very happy because he didn’t have to talk to anybody,” says Kononoff. That’s what Rick loved about island life: people respected his need for privacy. “He found peace on the water,” says Sunita. “He was very quiet, really reserved. But here, that was totally okay. No one was going to make you socialize if you didn’t want to.”

Separated from Sunita as she attended high school, then university, Rick wrote to her diligently. “He always called me ‘Munchkin’ or ‘Sunshine,’ and he always signed off with something like, ‘love you to pieces’ or ‘love you beyond all recognition,’ ” says Sunita.

On Jan. 22, a vicious storm brought relentless winds to Ganges Harbour. Rick, as always, was on his boat when it hit. Gales of wind walloped his vessel, ripped it from its moorings and sent it crashing into the raised dock of the harbour. Wearing no life jacket, Rick fell into the tumultuous water. Moments later, his lifeless body was pulled out by a tugboat operator who sped over to help. Rick was 61.