A master barber, he endured a series of gruelling hardships in his later years. Through the darkest days, his scissors kept him going. 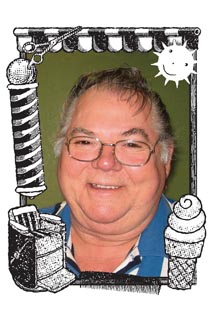 Robert William Gordon Egely was born on June 20, 1944, in Penticton, B.C., the eldest of four children born to Wilma, a homemaker, and Clarence, a salesman. Clarence changed jobs frequently and ran a number of businesses over the years: fruit stands, bicycle repair shops, a restaurant and even a bowling alley. Bob, as he was known, spent his childhood criss-crossing the Okanagan Valley with his family. “Sometimes we would move three times in one year,” Bob’s sister Carol recalls. Perpetual new kids, they were often bullied, but Bob was their consummate defender. “He was my protector if anybody picked on us,” Carol says.

When Bob was in Grade 12, Clarence decided to become a barber and, after graduating high school in Vernon, B.C., in 1962, Bob followed in his dad’s footsteps and enrolled in a Vancouver barber school. He opened his first barbershop a few years later in Golden, B.C., where he met and fell in love with Theresa, a butcher’s apprentice who passed by his shop every morning on her way to work. The two were married in Golden on Oct. 28, 1967, and had three children: Ryan, Aaron and Nicole.

In 1976, Bob moved to the north Okanagan town of Enderby, where his dad operated a barbershop and general store. He opened a Tastee-Freez franchise on an adjacent piece of land and ran the restaurant for a decade before going to work alongside Clarence at his shop.

In his spare time, Bob worked on charity projects with the Enderby Lions Club, and Theresa, a homemaker, volunteered as a crossing guard. She was known in town for the pink popcorn balls she gave away every Halloween.

When Clarence died in 1999, the general store was closed and Bob fulfilled his dream of opening his own shop on Enderby’s main drag. Bob’s Barber Shop quickly became the go-to place for town gossip, and the Lions Club’s unofficial meeting place. A natural raconteur, Bob never forgot a joke and was always up on the town’s news. “It was one of those old-time, Corner Gas-type shops where his long-time customers would come in and chew the fat,” says Enderby Mayor Howie Cyr, a loyal client.

In 2009, tragedy struck when Theresa died unexpectedly from pneumonia. Bob channelled his grief into his work. Then, six months after Theresa’s death, Bob received more bad news: due to a medical complication arising from his diabetes, both his legs would have to be amputated above the knee.

Retirement was never an option for Bob. “There was never a moment of self-pity,” Nicole says. “He just said to the doctor, ‘Let’s get these amputations done, because I have to get back to work.’ ” Bob’s son Aaron also discovered CanAssist, a University of Victoria organization that designs custom technologies for people with disabilities. Over seven months, engineers worked to design a $65,000 motorized chair that would allow Bob to circle his customers and move up and down to get the right angles for the perfect haircut.

Meanwhile, Bob’s health ordeals were far from past him. Last December, a poisonous brown recluse spider bit Bob on his left thigh. He went into septic shock, requiring doctors to further amputate his leg up to his hip. “We almost lost him,” Nicole says. But Bob’s optimism never waned, and this spring, engineers installed Bob’s high-tech chair, which he called his “spaceship.” By June, Bob was officially back in business. “He was so slick at it. His first time operating it, it was like he’d done it a million times,” Nicole recalls.

Bob’s precision and skill hadn’t faltered. When Enderby’s Mike Pasemko returned to his favourite barber, he was amazed that Bob could still give him a “perfect, incredibly short flat-top—considered to be the most difficult of all haircuts.”

But on Oct. 29, while dozing in front of the TV after a long day at work, Bob fell out of his wheelchair and broke his arm. Following surgery to repair his arm, stomach fluid aspirated into Bob’s lungs, and he had to be intubated to remove fluids. A sign posted on the door of Bob’s Barber Shop said he’d be back in a few weeks, and his spirits remained high: on Nov. 6, during a visit at the hospital, his family was so boisterous that staff had to ask them to quiet down. Bob’s kids promised to bring a “basket of sunshine” back to the hospital the next day, but they never got the chance. In the early hours of Nov. 7, as Bob’s breathing became increasingly laboured, renal failure set in and he quietly slipped away. Bob was 68.