The single largest monetary gift in Canadian history will bring together researchers and scientists from Sick Kids, UHN and U of T 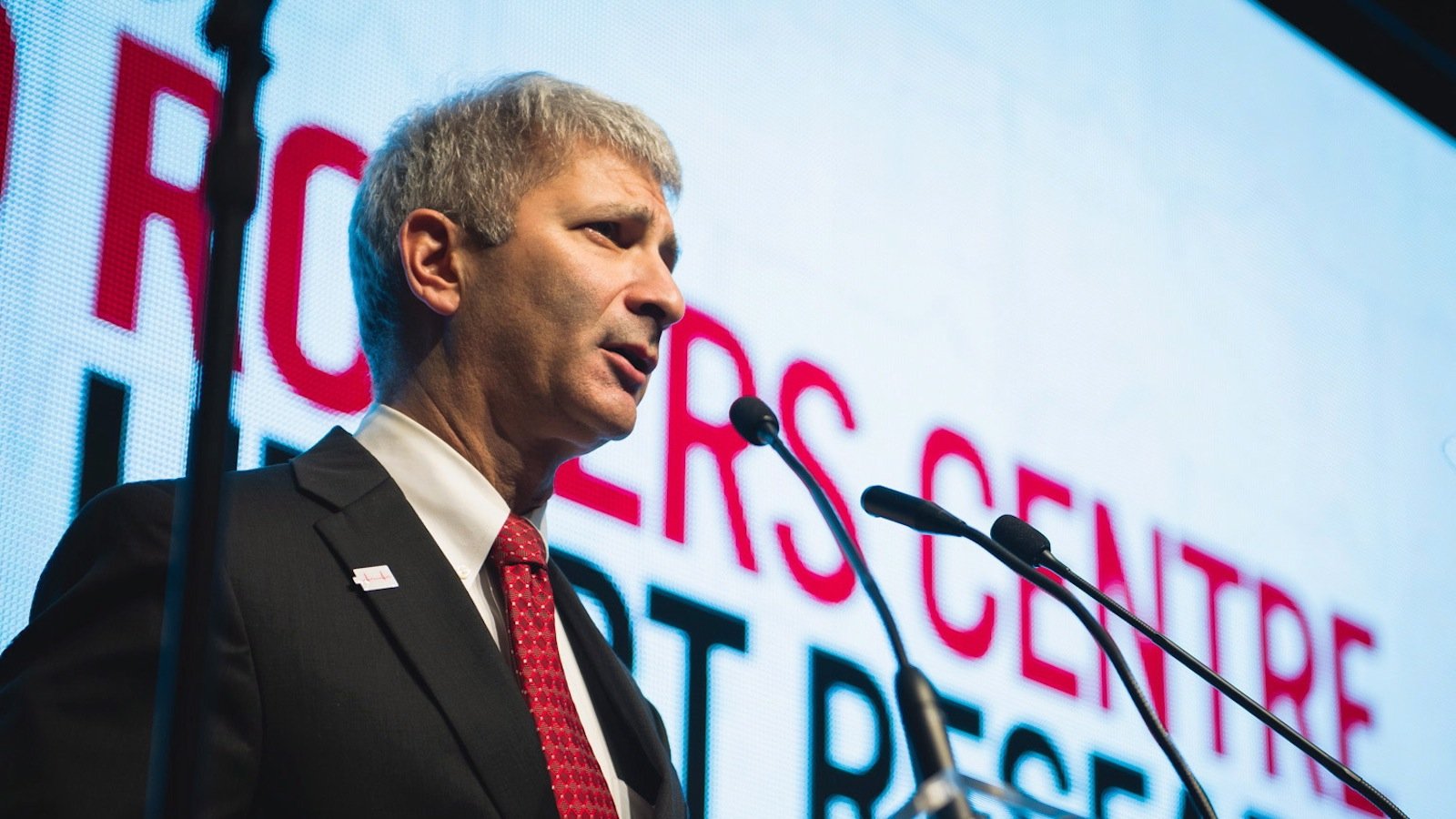 His children weren’t yet in high school when Ted Rogers suffered a heart attack. He was still in his 50s and the children worried how long their dad might live.

“When you’re a kid it’s even more scary,” says Martha Rogers, one of Ted’s four children. “Back then, in the ’80s, when you heard the words ‘heart attack,’ it meant the guy was dead.” Even today, the median survival rate for heart failure patients is just over two years.

But Ted Rogers did live, for more than two decades. He got to see plenty more of his kids’ birthday parties and continued to build Rogers Communications (which owns Maclean’s), until he finally succumbed to congestive heart failure in December 2008 at the age of 75.

In the fall of 2012, sitting together as a family around the living room of Ted’s widow, Loretta, they started planning how to give back to heart research and innovation.

This morning, Loretta Rogers announced on behalf of the Rogers family a $130-million donation over the next seven years to establish the Ted Rogers Centre for Heart Research. It is the single largest monetary gift in Canadian history and it will be matched by another $139 million from Sick Kids Hospital, the University Health Network (UHN) and the University of Toronto, bringing the total investment up to $269 million.

“I think that’s half of the Ontario health budget,” joked Dr. Eric Hoskins, Ontario’s Minister of Health, who was on hand for the announcement.

With more than 100,000 Canadians hospitalized each year due to health failure, according to numbers from the Heart & Stroke Foundation, the centre will bring together Sick Kids Hospital, UHN and U of T as partners to work on three integrated programs to focus on prevention and treatment.

“[Ted] didn’t believe in everyone doing the same thing, because then you’re just wasting time,” Martha Rogers says, who spoke about her late father’s work ethic and philanthropy alongside her brother, Edward. Finding partnerships was a must for this endeavour.

Sick Kids will focus first on genomic science to uncover links between genes and heart disease to help identify children most at risk before the disease develops.

The University of Toronto will utilize research in stem cell technology to find new approaches among cellular and tissue engineering for regenerating the heart muscle, coronary vessels and heart valves.

UHN, meanwhile, will focus on innovations in smart technology to reduce heart failure hospitalizations by 50 per cent in 10 years by identifying symptoms before they become problematic.

“We’re trying to develop a virtual environment in the home for patients where we [doctors] can follow what’s happening,” says Dr. Heather Ross, cardiologist and director of the heart transplant program at the Peter Munk Cardiac Centre. One of those innovations is a tile in one’s home bathroom that acts as a weight scale, which will automatically measure and transmit those numbers via Bluetooth to software algorithms individually designed for the patient. A drastic change in weight over a one-day period for a patient could mean a build up of fluids, which could lead to hospitalization. But the innovative tile-scale could act as a helpful Big Brother at home.

“All the patient actually knows that morning is they step on a tile and the whole thing goes into the system,” Ross says. “The patient gets off that tile, looks at their smartphone and it says, ‘Take an extra 40mg of Lazix today.’ All the patient had to do was step on a tile.” It might sound futuristic, but the technology is nearly here. “We’re in prototypes,” Ross adds.