A star paramedic trained for every crisis, he was being groomed for a top emergency management job 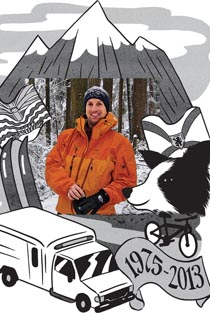 Roland Humphreys Webb was born Sept. 2, 1975, in Sydney, N.S., to Roland Webb, a Vancouver-born engineer with the Canadian Coast Guard, and Mary Webb, a housewife from Newfoundland. Four days after his birth the family moved to Halifax.

Rollie was named for his father and grandfather—an army colonel and hero in the bloody battle for Juno Beach during the Second World War; from them, Rollie inherited a strong sense of patriotism and service. He was a rather serious child, “focused, forthright,” says Rollie Sr., and deeply protective of his little brother Sean, his only sibling. In 1982, the family moved to B.C., settling in White Rock in suburban Vancouver. The brothers, who attended Ray Shepherd Elementary School, grew up playing “war” in a vacant lot down the road. Rollie treasured family time, watching Hockey Night in Canada and eating Sunday dinners. He inherited his mother’s love of East Coast music, her warmth and her talent for making those around her feel at ease.

Rollie loved solo sports—skiing, mountain biking and rock climbing—and, as a teen, would suspend himself from the back porch with ropes and carabiners, testing new techniques. At 14, he started volunteering with St. John’s Ambulance. Rollie was handsome, slim, five foot eleven with dark hair and big brown eyes, and the “serious, brooding” look that girls love, says Sean, his best friend as well as his brother.

After graduating from White Rock’s Semiahmoo Secondary School, Rollie applied to the BC Ambulance Service and, at 19, became one of its youngest-ever paramedics. Amid the routine violence and trauma, Rollie was unflappable, with his calm voice and unhurried, focused style. Leena Lousley, who fell while hiking along Widgeon Falls near Vancouver several years ago, will never forget Rollie, her rescuer. As he fitted her with a neck brace, he joked she was beautiful even upside-down.

He worked across the province, from Saltspring Island to Vancouver’s Downtown Eastside, and spent spare time volunteering with numerous search and rescue (SAR) teams. He also taught courses for civilians, the BC Ambulance Service and the armed forces. He led rescue teams along steep mountain cliffs, often suspended from a helicopter, and had a sixth sense of where to find the missing. “If I was ever lost in the woods,” says Sean, “I’d want my brother to come looking for me, because I know he’d find me.”

In 1999, Rollie met Tracey Fenton, a pharmacy assistant. They married two years later (the wedding rings were delivered by Sean on a carabiner), bought a townhouse in nearby Port Moody and soon had Abigail (“Squishy” to her dad) and Ethan. Rollie was a devoted, doting father known for his big hugs. He raised his kids in the outdoors, biking and hiking with the family border collie, Finnigan. He liked strong, two-bag tea and had a sweet tooth for cheesecake and chai lattes that was filling out his waist. He read crime novels, loved photography and often used radio talk—“all ‘copy, roger and 10-4,’ ” says Sean.

By 2005, Rollie had settled in at Coquitlam SAR as the team’s first-aid specialist and trainer. He mentored most of the volunteers who followed him, and was the heart of the team, says one of his students, Amanda Ward. “I have dyslexia, and Rollie knew that,” she says. When she presented Rollie with the map for her orientation exam, it was exactly backwards. “He held it up to the light,” she says, “turned it around, and said, ‘It’s perfect.’ ”

In 2009, his marriage to Tracey ended. That year, Rollie was tapped by the provincial ambulance service’s emergency management division, which plans for mass casualties. He played an integral role in emergency planning for the 2010 Vancouver Olympic Games, and was being groomed as the next director of the emergency management office.

In 2011, Rollie met Helena Michelis, who shared his passion for the mountains. Rollie was always over-prepared, Michelis says: even for short hikes, he’d pack a bag with supplies for a few nights in the bush “and an extra headlamp for me.”

On the chilly morning of Jan. 17, Rollie went out for a walk with Finn. He was crossing a road when he was struck by a dump truck. He died at the scene. Rollie was 37.