He was ‘the fun guy in the dressing room,’ but a friend’s collapse on the ice hit him hard 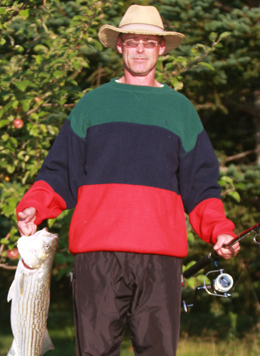 Roland John Nuttall was born on Feb. 2, 1958, in Amherst, N.S., the second of three children to Roland Nuttall, a construction company owner, and his wife, Madelyn, a nurse. John, as he was known, shared a birthday with his sister Karen, who begrudgingly accepted him in place of the pony she had requested. The resentment was short-lived; whenever Madelyn, who worked nights to be home during the day, slept, Karen would sneak John out of his bassinet to hold him. “She was a little mother,” says Madelyn, recalling how John and his brother Stuart, born in 1959, basked in the attention.

A sunny boy who was rarely without his signature grin, John grew up on the ice, playing hockey with Stuart and his friends. “If they weren’t at the rink,” says Karen, “they were out on the marsh.” (Those games involved chasing their dog Bismarck, a St. Bernard with a habit of stealing the puck.) John was fiercely competitive and “a fabulous skater,” says best friend Jimmy Skinner, who was part of a group of “hockey buddies” who started together in peewee. Countless weekends caravanning to tournaments cemented the bond that would continue into adulthood. Says Madelyn, “They were just like one big family.”

Though hockey was his first love, John was an all-around athlete, excelling at golf, swimming and fishing. Like his father, he had a magnetic personality, and teased those close to him “something terrible,” says friend Rob MacDonald. As a teen, he knighted himself “Sir Johneth of Nuttall,” and when he started losing his hair toward the end of high school, he diverted attention to Jimmy, two months his senior, by calling him “Old Jim.” Says Jimmy, “He was the fun guy in the dressing room.”

When John was 23, his father suffered a massive heart attack. Roland, who was 56 at the time, had been mowing the lawn, and died instantly. Before moving to Ontario to study forestry, John took over the construction business for a time. “He wasn’t very old, but he sure was the man,” says Madelyn. When she got engaged again, her children encouraged her to make the wedding into a big celebration. John set the boisterous tone for the occasion during the rehearsal, says Karen, with his “crazy, foolish” strut down the aisle, and suggestion that those in attendance “walk this way.”

After graduation, John was eager to return to Amherst, where he found work with the province as a forestry technician. He rejoined his hockey buddies on the ice and took over the family homestead. His “huge circle of friends” made an impression on wife Beth Mitchell, who played on a softball team he coached in 1988. John treated her son from a previous marriage, three-year-old Craig, “just like gold,” says Beth, and marrying him “was a no-brainer.”

About six weeks before their son Brett was due to be born in 1991, complications prompted an emergency delivery. After screeching behind the ambulance to Moncton, she says, “poor John arrived in his house slippers.” As a child, Brett was stuck to John, joining him on daily drives through parks and “even when he went down to the store to get milk,” says Beth. “Brett was the light of his life.”

Staying fit came easy to John. In summer, he’d often squeeze in a round of golf before work. In winter, he got his exercise at the gym he owned with Beth, and at the rink, where he played and coached his sons. The boys were watching his team in November 1998 when friend Ron Elliott collapsed on the ice. “John was the first guy to him,” says Jimmy, recalling how his failure to revive him with CPR “chewed him up.” Ron’s death touched John and his friends deeply. Every November, they joined Ron’s father in his Wake Up Call Awareness campaign, reminding older athletes to get regular checkups.

This past year was peppered with the 50th birthday parties of John and his hockey buddies. He continued to take his health seriously. After waking up in a cold sweat in June, he went to the doctor, who told him he was “in great physical shape,” says Beth. The couple spent most of the summer on their boat, practising for the early retirement they were planning. “We just sat there and played cards,” says Beth. “We were together 24/7.”

On Sunday, Oct. 12, John rose early to play golf. That evening, he was at the rink for the first game of the season with the Sunday night crew, and the men had agreed to go easy on each other. John was in the corner digging out a puck when he dropped. While they waited for paramedics, his childhood friends tried to revive him with CPR and a defibrillator. This time, it was Beth who trailed the ambulance to hospital. But when she arrived and saw his lifeless arm slip off the gurney, she knew there was nothing doctors could do. John had suffered a massive heart attack. He was 50.