He’d recently retired to his ‘utopia’ in Mexico, a walled compound in a region he knew well 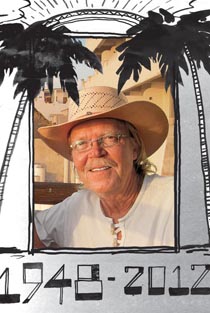 Ron Lloyd Mackintosh was born Aug. 24, 1948, in Toronto, to Don Mackintosh, an accountant, and Dorine, a homemaker. Ron, an only child, was close to his cousin Dan Sutton, a year his junior. They spent summers at the Mackintosh cottage at Wasaga Beach on Georgian Bay, where the boys swam and hiked and camped overnight in tents on the beach.

Ron loved comic books, ghost stories and playing pranks on his cousins. Once, he switched the black licorice sticks Dan hid under his pillow with red pieces. “We couldn’t figure out why the licorice changed to red,” Dan says. “He had us believing that ghosts did it.”

Every Easter, Ron joined Dan’s family in Clearwater, Fla., for a month-long holiday. The cousins swam every day in the motel pool. “He loved the heat,” says Dan. “Always. He hated being cold.”

Ron’s mother was strict with her only son, but Don was more easy-going. Ron and Don played chess and shot pool in the basement of their Eglinton Avenue West house in north Toronto. In the backyard, there was a giant slide, which Ron and Dan polished with waxed paper to make it more slippery.

After high school, Ron travelled to Europe and later moved to San Francisco, where he managed a health-food restaurant. But he returned to Toronto in the early 1970s and began training as an engineering surveyor. In 1975, he joined M.M. Dillon Ltd., a construction firm that built infrastructure projects such as highways, tunnels and railway overpasses. Ron was a project supervisor, overseeing the contractor’s work. In Dillon’s Windsor, Ont., office, he met Joan Jobin, with whom he shared a love for the West Coast. When he landed a job as an inspector for Associated Engineering in Nanaimo, B.C., in 1981, he moved to Vancouver Island. Joan followed a year later. They married in 1984, the same year their son, Adam, was born. Four years later, daughter Kala arrived.

In 1987, Ron’s boss, Tony Koers, started his own company, Koers and Associates Engineering, and he hired Ron as chief inspector. Ron supervised some of the biggest infrastructure projects on Vancouver Island, including the expansion of the Qualicum Beach Airport and the development of an 18-hole golf course and residential development in Nanoose Bay.

Ron, who was always safety conscious, was skilled at diffusing conflicts on a construction site, says Tony. “He resolved issues—staved them off before they became a problem.”

Ron’s job took him away from home for months on end, and the long separations ate away at family life. But in 1992, the family took a three-week vacation to Melaque, a small Mexican town on the Pacific Coast. All-inclusive resorts weren’t for Ron, so he left a week before to scout a nice vacation spot. He rented a hut right on the beach, Joan says.

In 1996, Ron and Joan separated. The split mystified relatives and devastated Joan. “He walked out the door,” she says. “That was pretty shocking for all of us. We were not expecting that.” Ron’s relationship with Adam and Kala faltered too. “I know he loved his kids,” says Joan. “I think he did the best he could.”

Eight years ago, Ron met Marie Halliday. During winter construction breaks, he’d return to Melaque with his camera for weeks on end. His friend Brian MacDonald says Mexico was a refuge—“his own little utopia.” “Ron was a bit averse to structure. He just loved the fact that he could go down there and find a larger sense of freedom.”

In 2010, Ron, then retired, packed his bags and drove to Melaque in his Jeep Patriot. He plotted his route carefully to avoid the worst crime-plagued regions, says David Regehr, a friend who made the drive with Ron. “He never stopped for broken-down cars.”

Marie joined him a few months later. They rented a walled, two-storey house a block from the beach. He was happy and relaxed, although security was a concern.

Still, “he was where he wanted to be,” Brian says. Ron adopted a stray dog, Nicco, who accompanied Ron around town in his Jeep. Last year, Kala came to visit for a month. He wrote friends in B.C. that he was thrilled to reconnect with his daughter.

Earlier this year, he and Marie moved to Barra de Navidad, a few kilometres southeast of Melaque. On Oct. 21, Ron left the house to visit a friend. He vanished on the drive home. His body was found beside a tree near Barra de Navidad. He’d been strangled. His dog and Jeep have not been found.