Royal visit 2016: Off script with Will and Kate 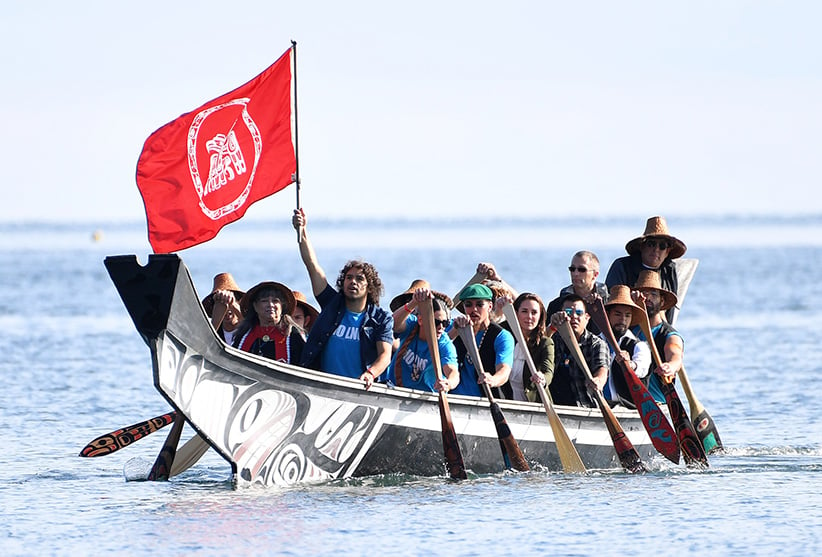 The silence felt deafening, as Will and Kate, the duke and duchess of Cambridge, rounded Sea Lion Point off Graham Island on Haida Gwaii last week. The royal couple, paddling a black-and-white Haida war canoe, rode a fast-rising tide onto Second Beach. It was so quiet that the splash of each stroke could be heard as their paddles cut through the cold, clear Pacific waters off B.C.’s north coast. Somehow even the 100-odd local schoolchildren on-hand—some as young as four—stayed perfectly still. The only sounds came from the Skidegate Saints, the basketball team who sang Will and Kate in, their voices low, solemn. One held the bright, red flag of the Haida Nation. A lone drummer on a small skin at the stern kept the beat.

Every stop on a royal tour has its own vibe. The Yukon leg felt warm, intimate, informal. Vancouver was loud and hectic. Haida Gwaii was sombre. There was anger in the air.

The royal stopover came just 48 hours after the federal government announced its approval of a controversial, $36-billion liquefied natural gas (LNG) project at Lelu Island, near Prince Rupert. The North Pacific Coast project, which the Haida vehemently oppose, would see 19 million tonnes of LNG pumped through B.C., then shipped to Asia.

“There’s a lot of anger here right now. The timing of the announcement—just two days before we showcased Haida Gwaii to the world—made people even more angry,” Haida President Peter Lantin explained. “It puts a lot of pressure on us: what are we going to do? What are we going to say?”

Prime Minister Justin Trudeau, who is promising to “reset” Canada’s relations with Indigenous peoples—and has a Haida raven tattooed to his shoulder—was nowhere near B.C. on the day of the royal visit. Christy Clark, the provincial premier, pulled out the night before. “We did not want her here,” Lantin said, flatly.

“We are not angry with William and Kate,” said Jenna Shelford. “This wasn’t their decision. Although we are mad, it’s not our place to show it today,” added the 16-year-old, one of four Haida youth chosen to take the royal duo fishing off Skidegate. Today was about “sending a message,” she explained.

That’s why Will and Kate’s fellow paddlers wore bright blue, “No LNG” T-shirts. And why a group of anti-fracking protesters lined the Yellowhead Highway—far from visiting media, but at a location the royal motorcade was forced to pass. (Support for their cause appeared widespread; during an interview with Maclean’s, eight of 10 passing cars honked their support. A passing RCMP officer threw up his hands, as if to say: “If I could, I’d be with you.”)

Related: Will and Kate on their grittiest royal tour ever

There is a reason the Haida feel so strongly. There is nothing like the North Pacific rainforest left anywhere else on the planet. Until about a thousand years ago, temperate rainforests could be found on every continent except Africa and Antarctica—Japan, Scotland, Iceland all had wild, towering rainforests rivalling B.C.’s. This one, once upon a time, ran all the way from Kodiak Island, in Alaska, south to California. These days, all that remains is the small, northern chunk, in B.C. The Haida, who’ve called it home for 14,000 years, are determined to keep it intact—and to keep industry far from it.

They are no rookies at this. Their hard-fought, 1985 win over clear-cutting and the government is considered one of the earliest, biggest wins by a First Nation in B.C. And the government’s “duty to consult and accommodate” Indigenous and treaty rights, among the most important precedents in Indigenous jurisprudence, was established in 1993’s Haida Nation v. British Columbia (Minister of Forests).

“We used to take pride in the Prime Minister’s Haida ink,” Delvina Lawrence explained. “We thought he was a friend. Now, it feels like he’s stabbed us in the back.”

So the canary met the coal mine on Haida Gwaii this week. For Justin Trudeau, it was a sign of the bumpy road ahead, as he attempts to deliver a massive list of election promises made to Indigenous people last year.

This was not the tour’s only snub, nor the only blast directed at Trudeau. Mid-tour, Grand Chief Stewart Phillip pulled the plug on participating in a reconciliation ceremony. The plan had Phillip, head of the Union of B.C. Indian Chiefs (UBCIC), handing a silver “ring of reconciliation” to William, then inviting the duke to affix it to the Black Rod, a ceremonial staff symbolizing the Queen’s dominion over B.C.

The UBCIC wanted its fury with Ottawa’s “stall-and-litigate” tactics over Indigenous fishing rights, and its greenlighting of the Site C dam made clear. The $9-billion hydro mega-project would flood a stretch of the Peace River Valley near Fort St. John, obliterating Dane-zaa burial grounds, and a huge list of major archeological, sacred and medicinal sites in a region where critics say industry has been allowed to do pretty much whatever it pleases.

But the trip saw a lot more more than snubs. The travelling pack of British reporters were taken aback when Gwen Wally of the Carcross Tagish First Nation grabbed William in a giant bear hug during a trip to the mountain town of Carcross, south of Whitehorse, the spontaneous squeeze being a royal no-no.

“I love you. I loved your mom,” Wally, 48, told William, who smiled, at once moved and embarrassed. Wally then wrapped her arms around his wife, Kate, in an intimate squeeze lasting several seconds.

“They’re just like us people—family-oriented, warm,” said Wally. “Plus I saw my auntie Sue give them a hug. As soon as I saw that, I was in there like a dirty shirt,” she said, exploding in laughter. “Us Tlingit, we’re a huggy people,” her aunt Susan Ganes added with a shrug, unfazed by the stir she’d created. Taylor Swift pumped from a set of speakers hung nearby. A curious raven circled above.

Carcross is all Windex-blue skies and kaleidoscopic valleys. Poplar, which have turned fluorescent-yellow with the early Yukon fall, spring from deep-green pine forests. In every direction, snow-dusted peaks scramble up from the shores of ethereal blue lakes.

The eight-day tour’s grand finale in Victoria, with an appearance by a curious harbour seal, and a few moments of blinding, fall sunshine—so rare, here on the wet coast—was almost as spectacular.

A huge crowd had turned up to see the Windsors off at the float plane docks in Victoria’s inner harbour. But most said they were there for two reasons, and two reasons only: George and Charlotte.

This, of course, is no longer the Kate and Wills show; Kensington Palace used the tour of Canada to introduce the prince and princess to the wider Commonwealth—something more cynical members of the British press interpreted as a means to drum up excitement for what otherwise might have been a snoozy trip.

On the docks Saturday, the fair-haired princess managed to escape her mom’s grip, toddling toward the plane before turning to wave at Christy Clark, who got down to eye level to return it.

Moments later, George, in brilliant, burgundy shorts to match his sister’s cardigan, made his own dash, before William grabbed him. Together, the family of four turned to give Canada one last look, and one last wave.

Not one in the thrilled crowd moved an inch as their plane banked right before taxiing off and circling southern Vancouver Island.

And that, it turns out, is the glorious thing about these royal tours that can feel so dated, so anachronistic. They bring “everyone together,” Katherine Baker, a 20-year-old exchange student from the U.K. explained, pointing out her new friends: the Australian beside her, two British transplants behind her. They remind us what makes the Great Bear Rainforest, Gwaii Hanaas—and the Haida and the Heiltsuk, who are largely responsible for saving them—so extraordinary.

They “allow us to forget, for a moment, all the bad things happening in the world.” Here we are, Baker adds, belting out a big, knowing laugh and a shrug, “united by cute children and an adorable couple.”

FILED UNDER: Haida Gwaii LNG Royal visit 2016 Will and Kate