In August, he beat cancer, and was playing his first season of hockey, just like the big brothers he idolized 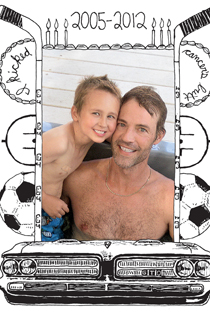 Ryan Timothy Wood was born in Stratford, Ont., on June 3, 2005, the youngest of Tim and Sara Wood’s three boys. Both Tim and Sara worked at Stackpole, a Stratford automotive parts manufacturer. Sara was a production operator who maintained the machinery, while Tim was a setter who fixed breakdowns. They raised Ryan and his brothers in the nearby village of Shakespeare where, years earlier, they’d met at a baseball game.

Ryan, their “happy little chunk of a baby,” would earn the nickname “Scooch” because he never crawled. “When he started to get mobile in the house, he would sit on his bum and use his legs to move forward and just scooch along the floor,” Sara’s sister Leanne Haffner explains.

When the boys were young, Tim and Sara arranged their schedules to work at different times so someone was always home with Ryan and his big brothers, Jonathan and Cody, who were four and five years his senior. Tim called the trio his “Timbits,” and loved coaching their soccer and hockey teams.

After Ryan turned one, his sunny disposition suddenly gave way to frequent fevers and leg pains. “He would only want to be held by mom or dad, mostly his mom,” says Leanne. When he was three, Ryan was diagnosed with acute lymphoblastic leukemia, a cancer of the white blood cells that crowds out normal cells in the bone marrow. For more than three years, the family would intermittently make the hour-long commute to the Children’s Hospital at London Health Sciences Centre for Ryan’s treatments.

When Sara quit her job at Stackpole to care for Ryan, Shakespeare’s tight-knit community threw their support behind the local couple. Mary MacAlpine, whose husband worked at Stackpole, put out donation jars at local businesses and sold more than 200 tickets for a spaghetti dinner to benefit Ryan’s mom and dad. Raffle tickets and auctioned pies—one went for a whopping $75—raised nearly $5,000 for the Woods.

Throughout his battle, Ryan, unaware of the severity of the illness, remained upbeat and loved to laugh with Ollie, the London hospital’s resident therapeutic clown. Cheerful and outgoing, he was quick to make friends with other children in the pediatric wing. He was wise beyond his years, and “often tried to comfort them if they were having a rough day,” says Leanne. And he didn’t think twice about being poked with needles. “When he was older, he would try and correct the nurses if he thought they were doing it wrong,” Leanne says with a laugh.

Much to his dismay, Ryan’s treatment schedule and vulnerable immune system kept him from starting kindergarten in the fall of 2009. “He couldn’t wait to get to school. He wanted to go. It was important for him,” says Leanne.

At home in Shakespeare, Ryan played with Hot Wheels, while Tim, who was very handy with cars and had grown up working on them with his own father, worked on his vintage Pontiac GTO. On Aug. 19, Ryan completed his final cancer treatment. Sara and Tim threw a backyard celebration to commemorate the occasion. Ryan’s “No More Chemo” party featured a cake that read: “I kicked cancer’s butt.”

Last September, Ryan started Grade 1 at Shakespeare’s Sprucedale Public School. He was on a roll, and wanted to play hockey, just like his older brothers. Everything Jonathan and Cody did, he wanted to do, too. “He tried to be tough like them,” says Leanne, “and older than he was.” In the fall, Ryan got the go-ahead to play in an area pre-novice league. His dad was made assistant coach. It was the first season Ryan could play hockey—his illness had kept him benched—and he couldn’t be happier. His proudest accomplishment, a five-goal game, came in early February. He named the five-goal feat a “Scooch trick.” His family still knew him by his nickname. To Ryan, his battle with cancer was already a distant memory.

On Feb. 25, his dad cheered him on as he scored a hat trick at an early morning hockey game in nearby Embro. Just before 10 a.m., on the snowy drive home to Shakespeare, Tim lost control of his pickup and collided with a large feed truck. Tim, aged 38, died at the scene. Ryan died of his injuries at Stratford General Hospital. He was six years old.