Salvation Army uses #TheDress as a force for change 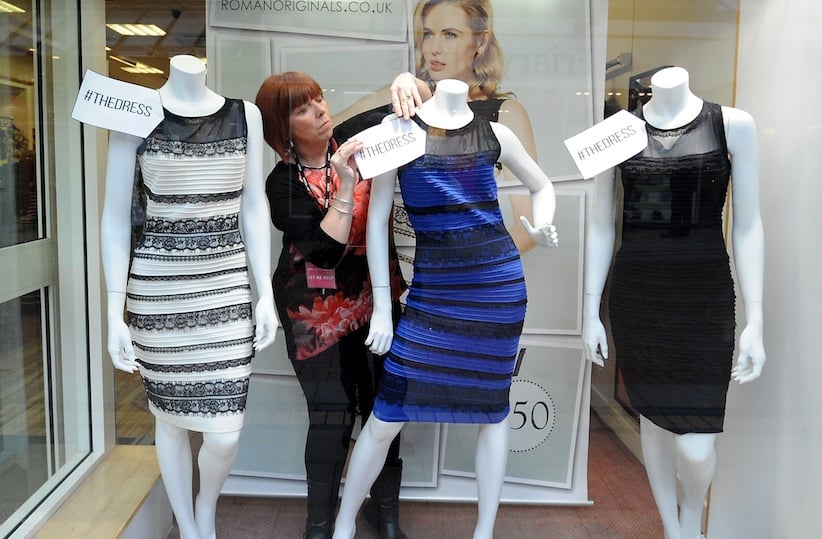 Debbie Armstrong adjusts a two-tone dress in a window display of a shop in Lichfield, England. It’s the dress that’s beating the Internet black and blue. Or should that be gold and white? Friends and co-workers worldwide are debating the true hues of a royal blue dress with black lace that, to many an eye, transforms in one photograph into gold and white. (AP Photo/Rui Vieira)

It’s been a week since a Tumblr image of a simple dress caused a firestorm on Twitter and almost broke the Internet with record-breaking web traffic.

Is it blue and black, white and gold? No one seems to agree. At one point, more than 670,000 people were viewing Buzzfeed‘s post on it.

Ever since, other brands have tried to cash in on the Dress, including one failed attempt by Pizza Hut.

OMG need your help. Is this a different colour to you? #Dressgate #Pizzagate pic.twitter.com/D2Evf8YHSY

Then, on Friday morning, the South African branch of the Salvation Army released a genius ad campaign via Twitter ahead of International Women’s Day on March 8, using the Dress as a force for change, calling on people to move beyond petty disagreements over colour.

“Why is it so hard to see black and blue?” it reads. “The only illusion is if you think it was her choice. One in six women are victims of abuse. Stop abuse against women.”

Why is it so hard to see black and blue? One in 6 women are victims of abuse. #StopAbuseAgainstWomen pic.twitter.com/FgDdKdsMMb

While it remains to be seen if it will garner the same attention the Dress itself, it has been retweeted thousands of times, with positive responses.

Of all the brands who tried to capitalize on #TheDress @SalvationArmySA wins! Great ad. http://t.co/5h5UHtzDpW

And it seems to be the dress that keeps on giving: On Wednesday, the British company that made the original dress, Roman Originals, released a limited gold-and-white edition of the dress for auction to raise money for Comic Relief, a U.K. charity fighting poverty.