Notre Dame: Saving (and scanning) a monument to civilization 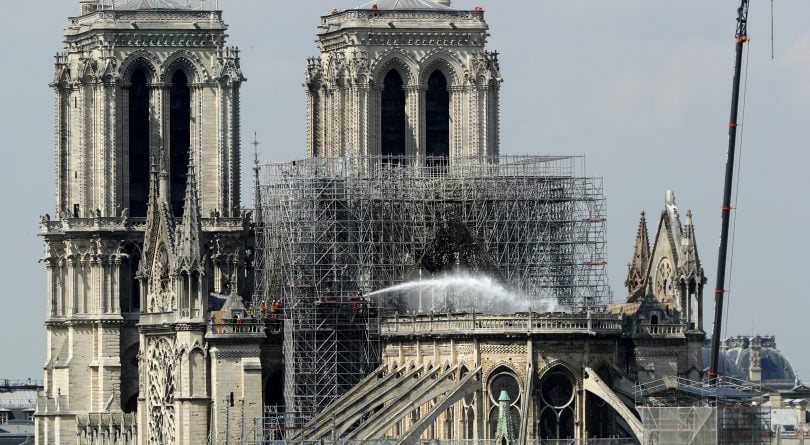 A firefighter hoses down a section of Notre Dame Cathedral following a major fire on Monday, April 17, 2019 in Paris, France (Dan Kitwood/Getty Images)

From a very young age, I was fascinated by New York City. I was bursting with questions about it; when I was maybe eight years old, my bemused parents got me a gigantic hardcover book of photos of the city’s sights. I must have flipped through it, front to back, a thousand times. But I didn’t actually make it to the city until 1999, when I was in high school, as part of a class trip.

On the last day, there was a block of free time. A friend and I took a cab to see one of the only major sites in NYC that we hadn’t toured. We’d seen it, driven past it, but hadn’t stopped there. There was no way I was going to leave New York without visiting the place that, to me, was the symbol of that great city. So off we went to the World Trade Center, to stand in the lobbies, check out The Sphere, and just stare straight up a the towers. Not quite two years later, on a sunny Tuesday morning, I watched those towers come down, and alongside shock and anger and horror, I felt relief. I’d seen them while they stood.

On Monday, watching the Notre Dame cathedral in Paris burn, I was shocked, of course. Everyone was. But there was again that sense of gratitude. I’ve seen Notre Dame, twice, with the bad photos to prove it. I can’t imagine Paris without it, and now that we know that the structure seems to be been largely saved, with much of the priceless art and relics collection also having survived, there is tremendous relief.

The recovery may take years; I may never find myself inside a rebuilt Notre Dame. But it can be rebuilt. It will be; France’s billionaires are lining up to cover the costs. That touchstone of Western civilization isn’t going anywhere.

READ MORE: Notre Dame is burning. And the pain we feel is worse because we all feel it.

I’ve been pondering that sense of relief, wondering why it’s so strong. Not long after the Sept. 11 attacks, I returned to New York. The gap in the skyline wasn’t just obvious, it was painful. There were gasps and whispers all up and down the aisles of the plane as we came in to land. New York looked wrong. It did for years.

Paris has been spared that. The damage to the cathedral is heartbreaking. Repairing it all will be a huge endeavour. But Notre Dame still stands. Psychologically, that’s massive.

This all brought to mind a now-mostly forgotten story that emerged in the dark days after the attacks on New York and Washington. The United States government quietly began taking extremely detailed surveys of major national monuments. Using advanced software programs and hyper-precise laser scans, the United States carefully recorded its most-beloved icons in incredible detail. Mount Rushmore, the Statue of Liberty, the Capitol dome … all these and more were scanned and saved.

At the National Archives, a Cold War-vintage system to rapidly lower the Constitution and the Declaration of Independence from their exhibit into a nuclear-blast proof vault was replaced with a newer design. The Americans understood that value of cultural continuity. What cannot be replaced must be saved, and what can be replaced must be replaced faithfully.

In a weird quirk of fate, Notre Dame’s reconstruction may benefit from similar work. In recent years, the late Andrew Tallon, an art historian fascinated by how Notre Dame was constructed, set out to make the most accurate digital scans of the building. Using a laser scanner similar to the ones used by the U.S. government, he created a fantastically accurate map of Notre Dame’s structure, including a billion individual pieces of data.

A digital artist for the video game Assassin’s Creed also reportedly spent two years working on a remarkably faithful visual reconstruction of the cathedral, down to the placement of individual stones.

The French, of course, don’t need to rebuild from scratch. The job ahead isn’t one of rebuilding, but of repair. Future visitors to Paris may not be able to go inside the cathedral, or fully appreciate its splendour underneath construction scaffolds and tarps. But the cultural continuity will be preserved, aided by the powerful modern tools of science and engineering.

Which is fitting, in a way. Places like the Notre Dame are themselves soaring monuments to civilization and to their era in history—in the cathedral’s case, a tangible demonstration of man’s love of God. But the fire crews that saved Notre Dame, the engineers who’ll rebuild it and the experts who created the digital records that will allow the work to proceed with unparalleled accuracy are themselves products of that same civilization. They won’t get their own monuments. A restored Notre Dame will have to do.