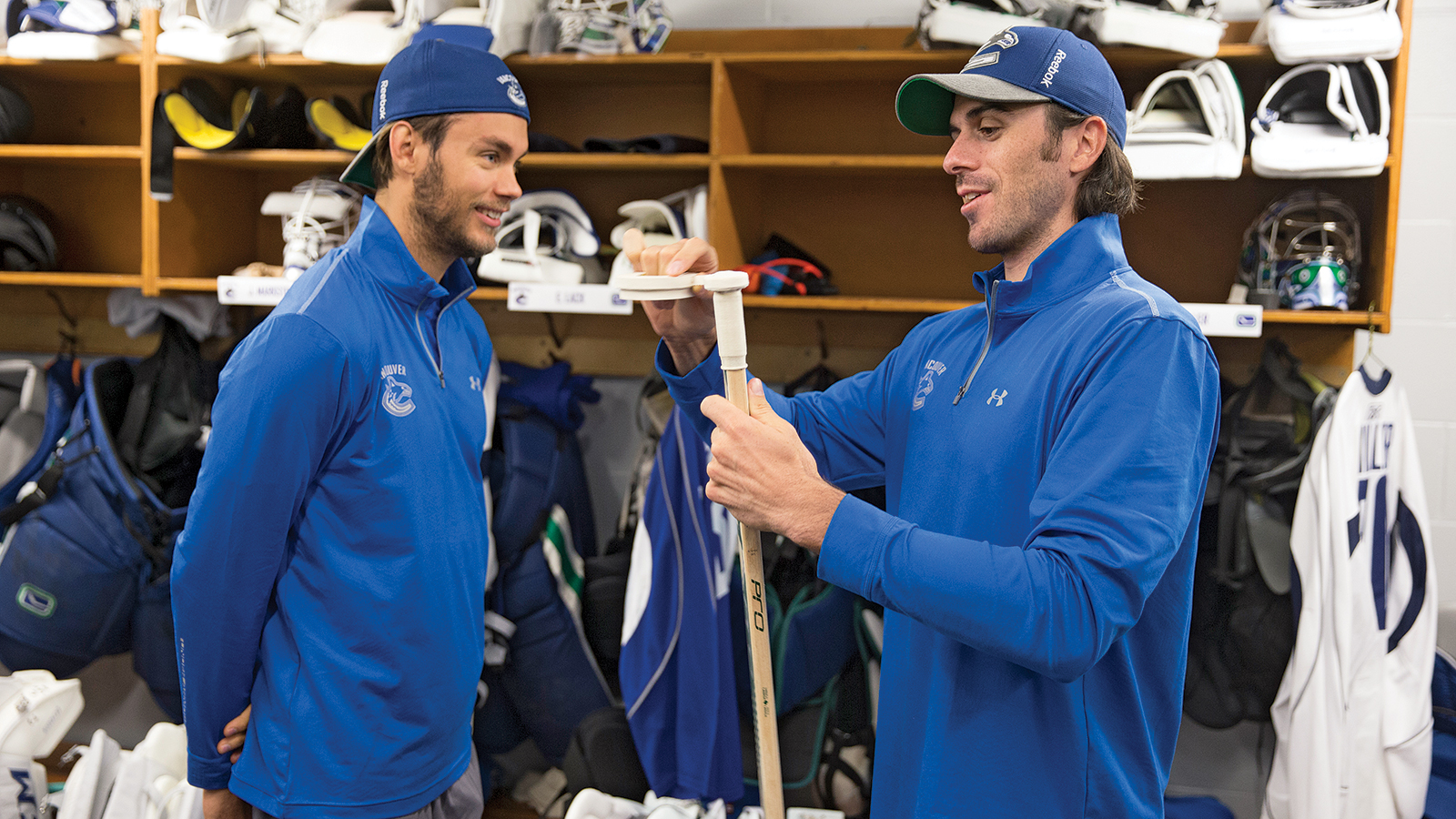 Ryan Miller sat slumped in a corner, not moving a muscle. As media flooded the Blues’ dressing room last April, after their ignominious, first-round playoff exit, Miller stared straight ahead, lost in thought, his pads still strapped to his legs. The goaltender’s career with St. Louis was over barely a month after it began.

The chapter’s ugly coda was that night’s brutal 5-1 drubbing, the Blues’ fourth straight loss to Chicago. It took Miller several minutes to compose himself before facing reporters. “I don’t know,” he said, curtly assessing his performance. “Not good enough, I guess.”

He might as well have been speaking of his entire time in St. Louis. When the Blues poached the Vezina-winner from Buffalo last March, the serial contenders suddenly looked like Cup favourites. But, after a string of injuries triggered a late-season slide, the Blues limped into the playoffs on a six-game losing streak before imploding in the first round. Miller’s shaky play bore no small part of the blame, and went a long way toward explaining St. Louis’s willingness to let him test the waters in a soft free-agent market.

Miller’s decision to sign with Vancouver in early July represents more than a hockey deal. The Michigan native is here to prove that St. Louis was a footnote, nothing more. He’s here to convince skeptics that he can power a team deep into the post-season, that he remains, at 34, an elite goaltender, a giant of the game. Miller is in Vancouver seeking redemption.

But he’ll have to tread carefully. Miller joins a rebuilding team coming off a disastrous season. The performance of its top players cratered last year, and the perennial contenders missed the playoffs for the first time in six years. Head coach John Tortorella and GM Mike Gillis were fired.

There’s new management and a new coach now and, with them, a new approach: an up-tempo, attacking game that stands in marked contrast to Tortorella’s plodding, defence-first, puck pressure system. “Everybody wants to start new this year,” says Vancouver’s incoming coach, Willie Desjardins, who is fresh off a Calder Cup victory with the AHL’s Texas Stars. “What happened last year is gone. And that’s the way everybody wants it.”

At ice level, the rebuild has been gentle. It’s more of a reshaping, really. Outside the crease, the core of the team is unchanged from the one that came within a game of winning the 2011 Stanley Cup, with the exception of Ryan Kesler, who joined the Anaheim Ducks in July. Miller was Vancouver’s marquee free-agent signing. But the additions of underrated centre Nick Bonino, who scored 22 goals for Anaheim last season, defenceman Luca Sbisa, and wingers Radim Vrbata, Derek Dorsett and Linden Vey, a top prospect with the Kings, give Vancouver a younger, deeper roster.

Still, the Canucks, who spent the last half-decade explicitly chasing a Cup, issued a sobering, new plan in early September: make the playoffs and hope for the best. “We want to win,” said Daniel Sedin, ahead of the Canucks’ pre-season training camp in Whistler, B.C. “We have a team that can make the playoffs, and anything can happen there.”

To get there, the Canucks will need to upgrade their power play, ranked a woeful 26th last season, and Henrik and Daniel Sedin will need to rebound. The Canucks still live or die based on the performance of the 33-year-old Swedes and, as any team does, their goalie. Even in the top-heavy Pacific Division, no skater can determine an outcome the way a goalie can.

“One moment doesn’t define you,” Miller has said, reflecting on his time in St. Louis. “You keep believing in yourself.” He hasn’t always sounded so even-keeled. As a young man, Miller was wound so tight, his father once stopped playing golf with him because he couldn’t stand how upset he got after a bad shot. That intensity has powered his success. But it’s also threatened to undo him.

Miller came to the Buffalo Sabres by way of Michigan State, where 10 members of his family have played over three generations, including his brother Drew, now a winger for the Detroit Red Wings.

Winning was never a problem for Miller, who arrived in the NHL as the most accomplished goalie in NCAA history. (His college records, including a .941 save percentage and 26 shootouts, are still standing.) But he hadn’t figured out how to lose.

In his third NHL start, Miller’s home-state Red Wings picked apart the then-23-year-old, logging five third-period goals in an ugly, 7-2 final. Miller was sent down to the minors. He was crushed, certain his hockey career was over.

It took him two long years, but he clawed his way back. His NHL return in 2005-06 was so explosive, he seemed a lock for Team USA’s Turin squad by his sixth start. But he was sidelined by a broken thumb, and didn’t return to the ice until the day the U.S. team was announced, too late for team officials to include him comfortably.

Miller turned the slight to his advantage: He used the Olympic break to tweak his conditioning, thus enhancing his stamina and flexibility. Then he went on a tear that took the Sabres all the way to the seventh game of the Eastern Conference finals.

Strangely enough, after Vancouver’s masochistic, two-year struggle to replace Roberto Luongo in the crease, in Miller, the franchise found a goaltender who looks a lot like their departed No. 1. Both are tall and lean, with jet-black hair, dark complexions and wives based in other cities. They’re quick and agile, with two of the best gloves in the game. They’re prickly. Neither has ever topped their sublime performances at the 2010 Winter Olympics. In Vancouver, both goaltenders stole games outright, almost single-handedly powering their teams into the finals, where they met for gold.

Luongo took it home, of course. But Miller, after allowing Sidney Crosby’s fluky game-winner to trickle through his legs, was named the Olympic tournament’s most valuable player. He went on to claim that season’s Vezina trophy, after pushing his sub-par Sabres to a second Northeast Division title. 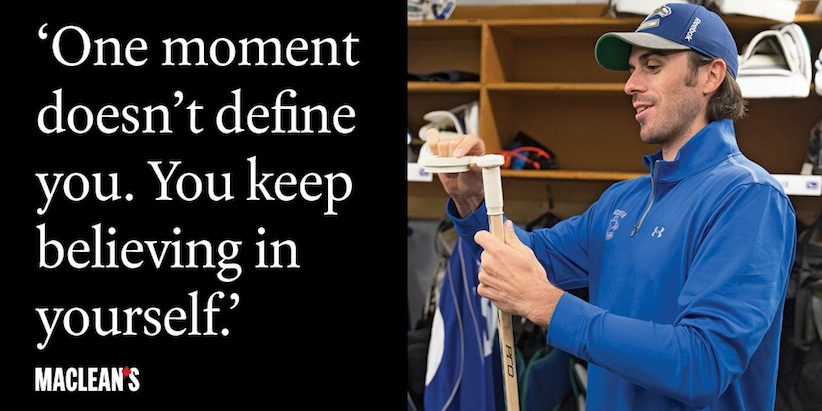 Still, “Buffalo was frustrating toward the end,” Miller admits. “We weren’t getting the results we wanted.” The Sabres were unable to make it past the post-season’s first round. Then, management “started letting core guys go—that really shakes you up.” Toward the end of last season, Miller began looking for a fresh start. He says he wanted to reboot his career. Vancouver, known as the league’s goalie graveyard, a place great backstoppers’ reputations go to die, was a curious choice. Miller claims to welcome the challenge: “If you’re going to play in a city that cares a lot, every game is important. Every game means something.”

Miller, in some ways, is an anti-athlete: complex, loquacious, cerebral. He’s an amateur photographer. He reads. He loves playing the guitar. He drives a hybrid. But he also makes pains to establish that he’s no hermit, conscious, perhaps, of his position’s stereotypes: “I’m trying to be a little more social, to be around friends and not be the weird goalie who sits in his house all day and wears the cushions out on his couch,” he’s said.

His loyalties lie with his family, his “pit crew” of core pals, and his wife, television actress Noureen DeWulf.

He spent the summer training and clearing his head. Conscious of the strain that travel exacts on players in the Western Conference, Miller put together an off-season regimen carefully designed to ramp up as the season approached. “Every year, you have to prove yourself,” he says. “You’re not handed a job.”

Although a popular narrative says Miller is fading with age, his numbers tell a different story. He hasn’t posted a save percentage under .915 in six seasons, while topping the league in shots against for the past two. He’s done this almost exclusively while propping up a basement dweller. The truth is, Miller is a difference-maker. And he’s hungrier than ever.