Saying goodbye to minor hockey, lunatic parents, and that smell

Scott Feschuk bids farewell to the world of minor hockey: crazy hockey parents, $300 sticks and a locker-room stench worse than a perspiring sasquatch 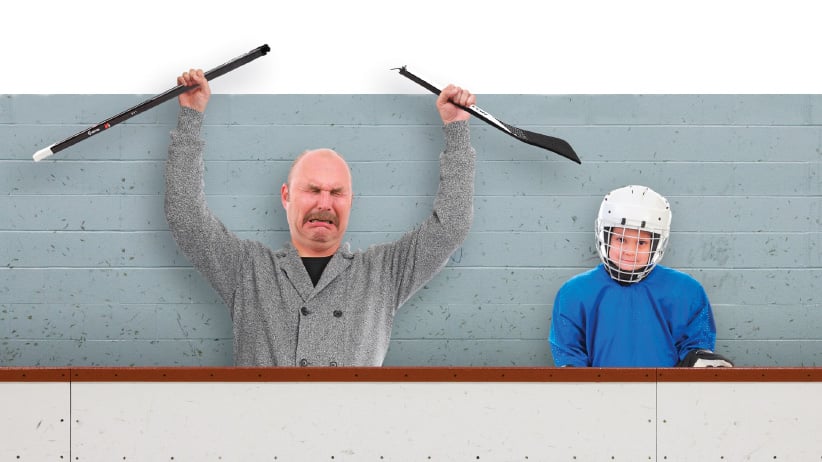 Our oldest son just played the final game of his minor hockey career, a milestone that reliably sends parents into spasms of nostalgia and melancholy. My little boy is all grown up and therefore I am elderly now. FETCH ME MY METAMUCIL AND AN EAR TRUMPET.

From buying his first post-game slushie to watching him play for the first time with a hangover, the montage of memories is now complete. Did I get a little emotional? Yes. Did I shed a tear? Sure did. Did I fall theatrically to my knees, shaking my fist skyward while cursing the fleeting nature of human mortality? Three times.

But let’s not deny it: there are also some upsides to the end of hockey.

No more lunatic hockey parents. Most of the crazies tend to mellow out by the time their kid reaches the midget years. But even in the final series of my son’s farewell season, a couple of parents on the other team were still hollering things like “Forecheck!” and “Shoot the puck!” at 17-year-olds who, at this point, had played and practised the game for a thousand hours or more. One woman actually shrieked “Score!” while a player was on a breakaway. That’s some solid advice, Mom. Totally stopped the kid from pausing at the hash marks to fashion the puck into a Christmas ornament.

It remains my firm belief that government should legislate Take Your Hockey Player to Work Day. All kids ought to be given the opportunity to follow their parents around the office shouting, “Hustle! Meet harder! COLLATE THE DOCUMENTS LIKE WE PRACTISED!”

No more driving to road games. Past 10 o’clock in the dead and dark of a mid-winter night. Snow falling hard and gusting across the highway. The kid in the back seat, asleep. And that’s when you notice it for the first time: the reason they call it white-knuckle driving is that your knuckles actually do turn white.

With those tense evenings in mind, I would like to take this opportunity to formally apologize to Mother Nature for the unforgivable profanity I’ve used to describe her over the past dozen winters.

No more broken sticks. My three favourite hockey-related expressions as seen on the faces of parents:

1. I just hollered at the referee and now I feel ashamed.

2. I regret having eaten that large poutine from the canteen.

No more sketchy hotels with uptight employees. Not sure who I’ll miss less: the power-mad manager in the polyester vest who scolds little kids for acting like children or the surly desk clerk who shouts, “NO HOCKEY BAGS IN THE HOTEL!” across the lobby. Here is my favourite encounter, which actually happened:

Hotel guy: Sir, if you can’t stop these children from running in the halls, I’ll have no choice but to get you expelled from your tournament.

Me (after laughing for roughly seven minutes): Wow. I had no idea the assistant manager at the Travelodge wielded that kind of influence.

Hotel guy: My cousin Gerry drives the Zamboni at the rink. He knows people.

No more of That Smell. Over the years, I’ve been both a coach and a team manager, so I’ve spent plenty of time in the dressing room. There is no part of me that didn’t enjoy that experience—except for my nose, which longed to escape to somewhere a little less vile, such as the armpit of a perspiring sasquatch. For those of you whose kids are still young, here is a handy guide to future stenches:

Bantam: The aroma of hot soup made with a package of ground beef found in a dumpster in 1997.

Midget: Satan’s jockstrap wrapped in a hobo’s underpants and smoked for 12 hours above a raging garbage fire.

I’ve been trying to think of a way to describe how much I’ve enjoyed watching my boy and his friends play hockey. Here’s the best I can do. Those smells I just described? I already miss them.