Scenes from a royal arrival in B.C.

'Wills mania' 2.0? Not so much. But there was much pomp and fervour when the royal couple touched down in Canada

Surely, the most touching thing about this generation of royals is their normalcy.

“Watch your step,” William, duke of Cambridge, cautioned his young son, who was taking the steep, aluminum stairs a bit too quickly at 443 Squadron, the Royal Canadian Air Force Base in Victoria yesterday, where the royal family touched down on arriving in the B.C. capital yesterday evening.

George, slightly off-kilter, grabbed for the skirt of his mom’s royal blue dress. Kate deftly caught her three-year-old’s hand, balancing Charlotte on her left as the family was met on the tarmac by Governor General David Johnston, and his wife, Sharon. The 17-month-old princess, in a short-sleeved dress, nestled deep into her mom, protecting herself from the damp fall air. Kate lovingly stroked her back, absently kissing her daughter’s head, allowing the smiling toddler to paw at the diamond Maple Leaf brooch pinned to her chest.

Twice, the duchess of Cambridge reached down to smooth George’s stubborn forelock, before crouching to comfort him. “Are you okay?,” she whispered, briefly turning from the greeting party, and stroking the young prince’s cheek.

George, who’d peeked excitedly from a plane window as the royal family taxied in on a white RCAF Airbus, seemed a bit shy and apprehensive after exiting for the intimate arrival ceremony, which was closed to the public. (It was, after all, midnight, U.K.-time—the poor kid.) 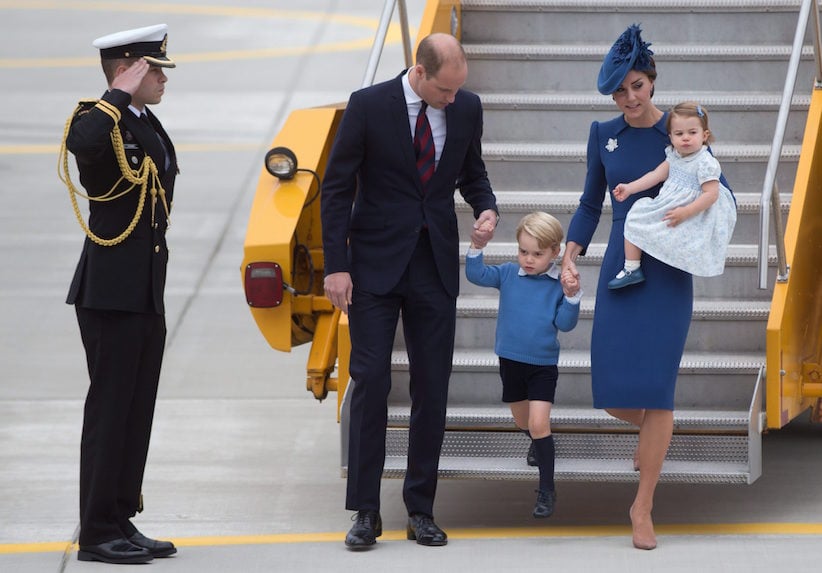 William, after at first gently chiding his son, let the toddler tune out like any good dad. Hiding behind his dad’s knee, the young plane lover, dressed in navy shorts and a pale blue sweater, was transfixed by a landing Sea King chopper. A few minutes later, after a gentle prompting from dad, George gamely waved to media.

The family was next met by Justin Trudeau, who dropped to his knees to try to coax a high five from the young lad—George left the Prime Minister hanging—and Sophie Grégoire Trudeau, who was dressed for the occasion in clashing purples and a felt fedora.

After dropping their tired kids at Government House, in Victoria’s downtown, the royal couple moved to B.C.’s Legislative Assembly, where they addressed an adoring crowd. In his speech, William was only to happy to mock himself, referencing his last visit to B.C., in 1998. Then an awkward teen, he was deeply embarrassed by screaming girls who were sometimes moved to tears by the mere sight of him. (“Wills mania,” it was dubbed by the British press. One group of teen girls pledged to follow the then-16-year-old prince to every stop. “William. It’s me you’ve been looking for,” read one of their signs.)

Kate seems a bit less smiley, less animated, and more polished and statue-like on this, her second tour of Canada. But she allowed a slight roll of the eye when her husband punctuated a greeting delivered in French with an exaggerated, theatrical sigh of relief: “It’s a little rusty,” William kidded—“work with me.” Earlier, she’d whispered a joke into his ear after their warm welcome from crowds, which was notably more muted than the loud cheer that went up when Trudeau’s name was announced.

Locals had been warned off selfies, but that didn’t stop Kara Bayley. Nor the young royals. “You’ve got to be real fast with the selfie,” the duke of Cambridge coached Bayley, delighting the 14-year-old.

“My life is complete!” she later shrieked to Maclean’s. “It’s been my dream to meet them,” she explained, noting that she’d stayed up all night to watch their wedding, and has been collecting their images from magazines and newspapers all her life. “I’d rather meet them than even Justin Bieber,” said the native of Crofton, B.C., before sprinting off across the lawns of the legislature, arm-in-arm with her pal, Kodi Jervis, 15, whooping, and jumping in the air.