Chris Arnade found and photographed members of the U.S. socio-economic underclass in one of the few places they find comfort 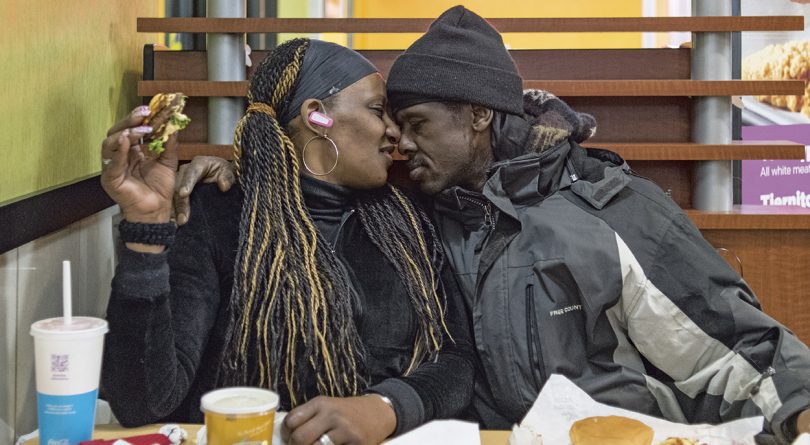 An affectionate moment over a meal in Hunts Point, N.Y. (Chris Arnade)

After nearly two decades on Wall Street, Chris Arnade left his successful career to chronicle the lives of people living in marginalized and deindustrialized communities across America.

His work is focused primarily on the “back row,” the forgotten people who are shackled by economic blight, addiction and general social dysfunction. He found them at McDonald’s restaurants across the U.S.—which he describes as “ad hoc community centres for distressed America.” They range from a homeless man who pushes his children in a shopping cart through Portsmouth, Ohio to people tapping a fire hydrant in the Bronx so they can bathe.

He shares what he learned in Dignity: Seeking Respect in Back Row America, a thought-provoking new book of essays and photojournalism that evokes George Orwell’s The Road to Wigan Pier, an intimate examination of working-class people in Northern England after the Great Depression—which seems relevant to our own parlous times.

Maclean’s writer Alireza Naraghi, asked Arnade about his remarkable journey, what life is like for American underclass, the fatal flaws of today’s economic system and what the political class fails to understand.

Q: What was the tipping point for you to make the transition from Wall Street and tackle this mammoth project?

A: There was mostly a slow realization over my career that both banking, and the larger society of successful, highly educated Americans that it was part of, was dramatically out of touch with the bulk of Americans. That realization played out over my long walks I would take with my camera on weekends. Sometimes 20-mile walks that weaved through parts of the city most successful people rarely go to, but have strong, mostly very negative opinions on. It was on those walks I saw just how wrong those opinions were.

We were not only out of touch, but also had a deep hubris that made us believe we knew what was best for the rest of the country we didn’t understand.

If there was a tipping point it was the financial crisis, which helped expose just how much damage we could do, and yet suffer few if any consequences. 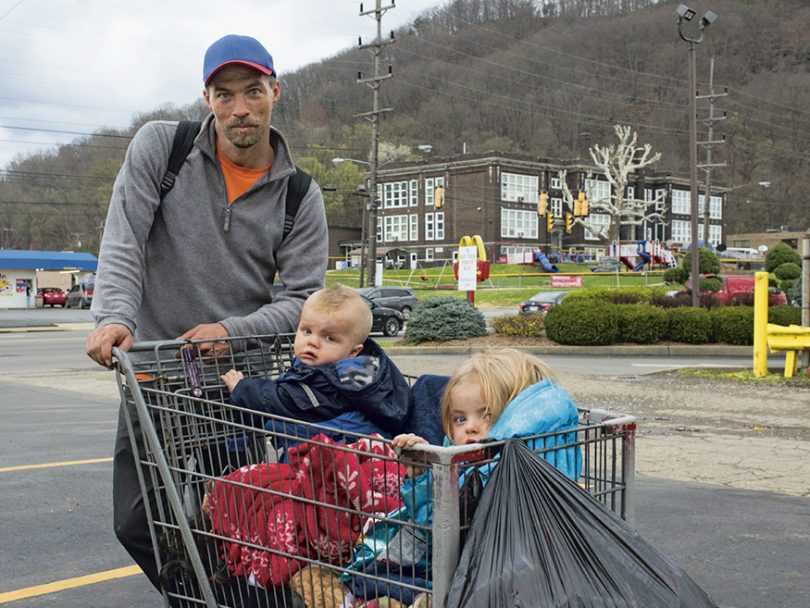 Q: Has this journey changed your thoughts and viewpoint of poverty?

A: I was never a poverty scold, never one to blame others for their “failures.” But I don’t think though I fully understood just how unfair our system is. It is one thing to read about it, and another to witness it and hear about it first-hand.

Prior to this project I had very different views on religion and mobility. I didn’t understand why someone would stick to their religion or why they wouldn’t just move to find a better job (or get a better education). I came to realize how wrong I was. Both religion, and local community give huge value and meaning to many people—often the most important meaning and value they might have in their life. To demand, or think, they should give them up isn’t only arrogant, it is downright offensive.

RELATED: Shelter in the shadow of the golden arches

Q: While you were covering nearly 200,000 kilometres throughout the country, McDonald’s remained your steady pit stop. Why?

A: Because they are often the only places open to the public in the communities I was spending time in that worked. Everyone I was documenting—mostly the very poor, the homeless and the addicted—were spending time in them. They used them for a clean bathroom, a place to use wifi and a place to charge their phone.

Also as a place to rejoin broader society on their own terms. They could grab a paper from the garbage can, sit at a table, and just escape the streets for a while without being asked to move on. If they tried that in other places they would have the police called on them, or asked to move on.

There is a wonderful, rich, and deep social structure and community that takes place in most McDonald’s. It is, as I have written, the ad-hoc community centre for distressed communities.

Q: Did this project change your view of addiction?

A: I don’t see addiction as having much of anything to do with supply. It is a problem driven by demand. People want drugs because people are in pain and drugs numbs that pain for short periods of time. Cutting down the availability of drugs won’t end the problem, people will just find something else to try and cope with the pain.

That pain isn’t just physical, although it partly is, but emotional. 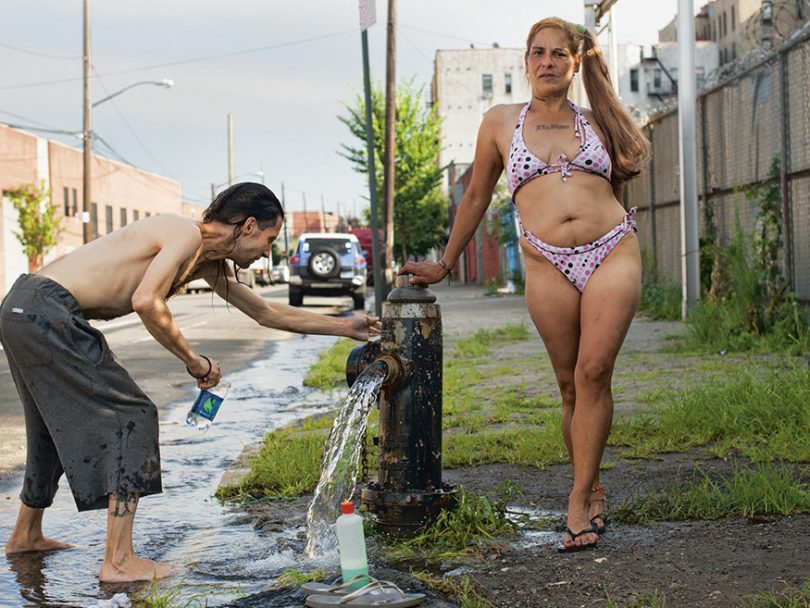 Q: Where is “Back Row” America?

A: Back row communities are not confined to one part of the country. They are everywhere. They are rural and urban. They can be mostly white, or mostly black, or mostly Hispanic.

Part of the reason I took so long on this project is to highlight that. You can’t understand back row America if you only focus on lower income whites in Ohio, or lower income blacks in NYC, or recent immigrants in El Paso. You need to do all of that and more.

Q: I assume that, as a scientist, you often find yourself at odds with religion. But you also visited many community churches. Did your view of religion change?

A: Very much so. I walked into the Bronx and atheist and now seven years later I attend religious services on my own time. I am not deeply religious, but I have a lot more respect for faith.

The churches in the communities I was spending time in where, besides the McDonald’s, often the only places that offered any services or outreach to people without also being depressing. The government services, the various offices and such, are also there and open, but come with a tangle of rules and are filled with harsh lighting, dirty floors, and tons of paperwork. They are soulless and the churches, by contrast, are not. 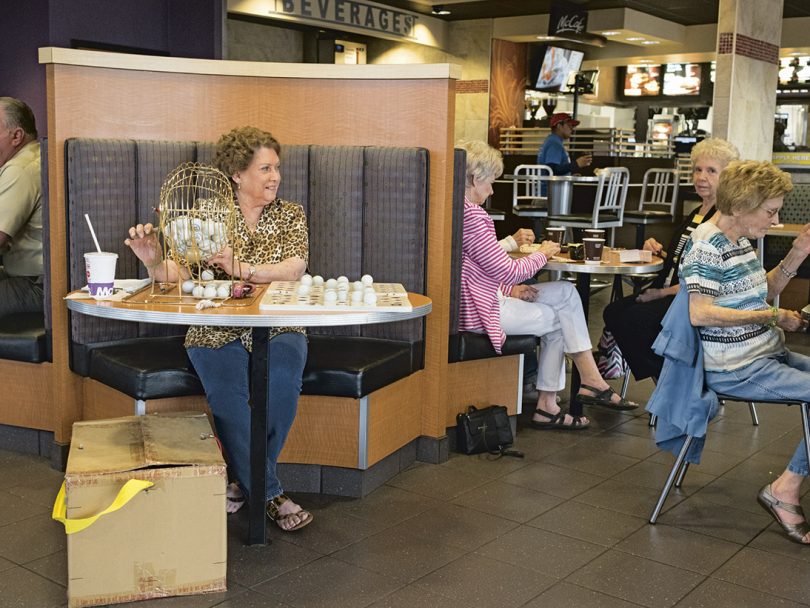 Regulars at the McDonald’s in Gary, Ind. (Chris Arnade)

Q: Are racism and the sense of cynicism more widespread than you thought?

A: Yes. My biggest frustration is trying to get people to see that the highly ranked educational system we have built, often with good intentions, is deeply racist.

It is a system that defines success in terms of how many credentials you can get, how long a resume you can build, and it is unforgiving to those who don’t or can’t get build that resume. Yet building that resume is very dependent on where you start off and the resources available to you, and few minorities start in a position that allows them any chance to succeed or with access to the necessary resources.

To make matters worse, if you fail to build the right resume, either because of your situation or because it isn’t who you are, you are told it is your fault.

Because we have this false belief that anyone who works hard enough, studies enough, can succeed. We find the very few people who can overcome the very long odds, often with luck, and then elevate them, retelling their story over and over.

It is a system that is deeply unfair while claiming to be fair. People see through that, and knowing there is little they can do to fight it, they end up becoming cynical. It is what I have called a justified cynicism, because they realize that getting angry about it will often only bring more problems and more stigma.

Q: How did your travels change your views on the way we look at economics?

A: We have relied on economics way too much for building our policy. We have made growing the GDP and profits central to so much, without thinking about the consequences from that.

We have implemented a brutal efficiency that has left so many people feeling empty, lonely, and confused.

Q: Do you think there’s an alternative? What would that look like?

A: There is an alternative, which is building a society less focused on how much stuff we have and more focused on community health. I’m just not sure how to get there.

Changing policy can only do so much. You can’t just legislate faith and community back into a central role in peoples lives—and you shouldn’t. There needs to be an organic change in our culture away from over-valuing things and re-valuing community health. 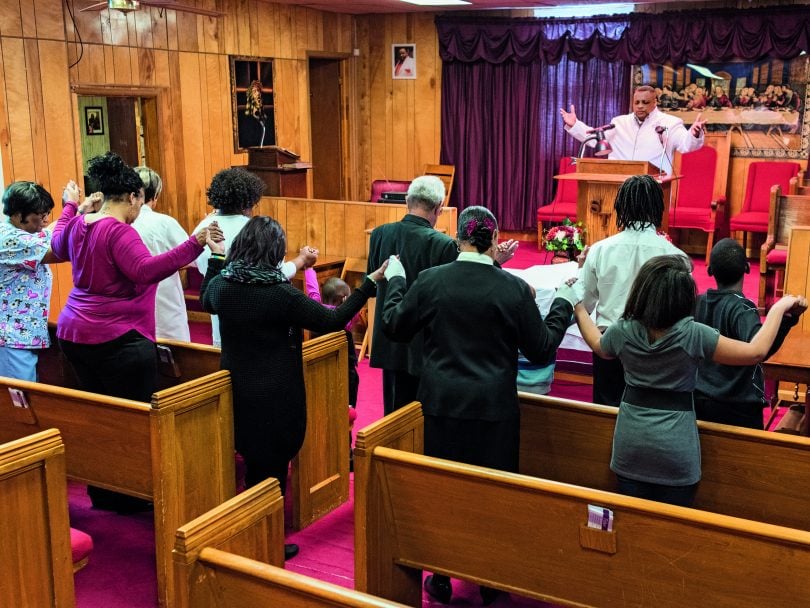 A moment of prayer in Youngstown, Ohio (Chris Arnade)

Q: I noticed, in the book, there’s a sense of hope despite the complexity of these structural problems. What makes you hopeful?

A: The individual decency I saw all over the country. Despite awful hardships, most everyone I met was generous, helpful and well meaning.

People are resilient and can find dignity despite overwhelming hardship.

Q: What do you hope the readers learn after reading your book?

A: To be less quick to judge. If a group or person does something you don’t understand, try to walk a mile in someone’s shoes before judging them. Or, more realistically,  spend time talking to them on their terms, listening to them, before condemning them.

Poor people, in aggregate, are no lazier than rich. Addicts are no weaker than the sober. The “problems” we talk about of group is almost always due to the impact of their surroundings, rather than any atavistic failing.

You will often find that once you get a fuller picture of who people are, their decisions and actions will make more sense.