From satellite repair to cameras that work on Mars, Canadian companies have their eyes on the heavens 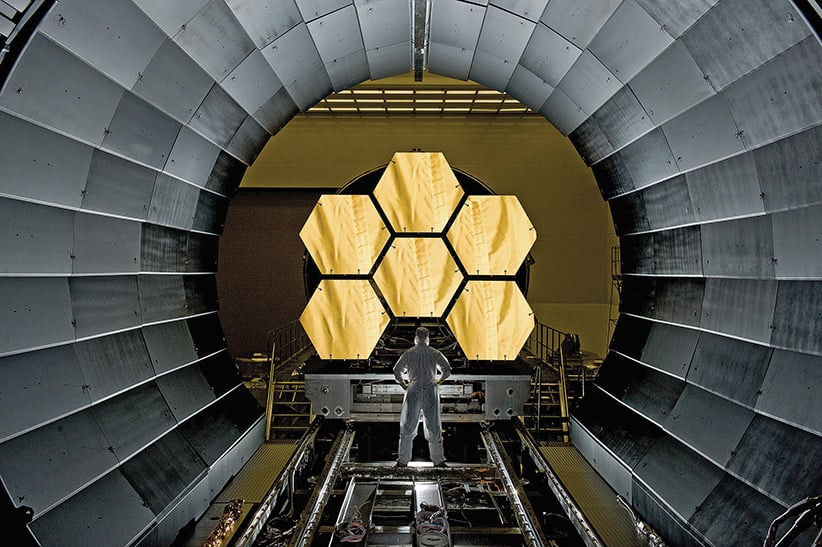 Some of the most exciting new space technologies are coming out from right here in Canada. Here’s a look at some of the best ideas that our country has contributed to better understanding and harnessing space.

It’s being built to search for the earliest stars, map the evolution of galaxies, study the formation of today’s planets and even search for potential life in the universe. Needless to say, the James Webb Space Telescope (JWST) will be the most powerful telescope ever built. Its sunshield alone will be the size of a tennis court.

As part of an international collaboration between NASA, the European Space Agency and the Canadian Space Agency, the JWST is the successor to the famed Hubble Space Telescope. It’s scheduled to launch in October 2018. Canada’s Com Dev International, based in Cambridge, Ont., designed and supplied two integral instruments: the fine guidance sensor is a critical element for the telescope to remain pointed accurately, while the near-infrared imager and slitless spectrograph can detect the thin atmosphere of tiny, Earth-like planets and determine whether they have the conditions to sustain life. Canadian astronomers, of course, will get their fair share of observation time. 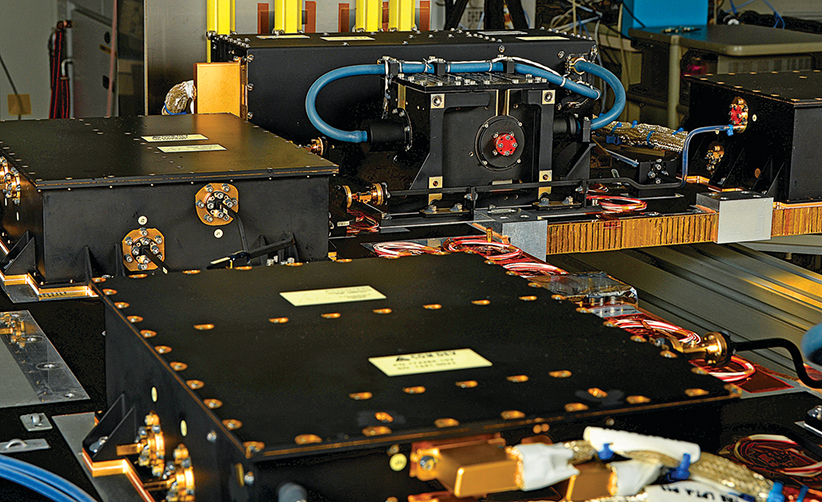 Meteorologists rejoice. EarthCARE is a planned radar satellite that will measure cloud distribution and atmospheric aerosols to better predict climate change and weather forecasts. But that’s not its sole mission. EarthCARE is designed to characterize clouds and measure Earth’s reflected solar and infrared radiation, in part thanks to the 94GHz cloud-profiling radar subsystem built by Com Dev. 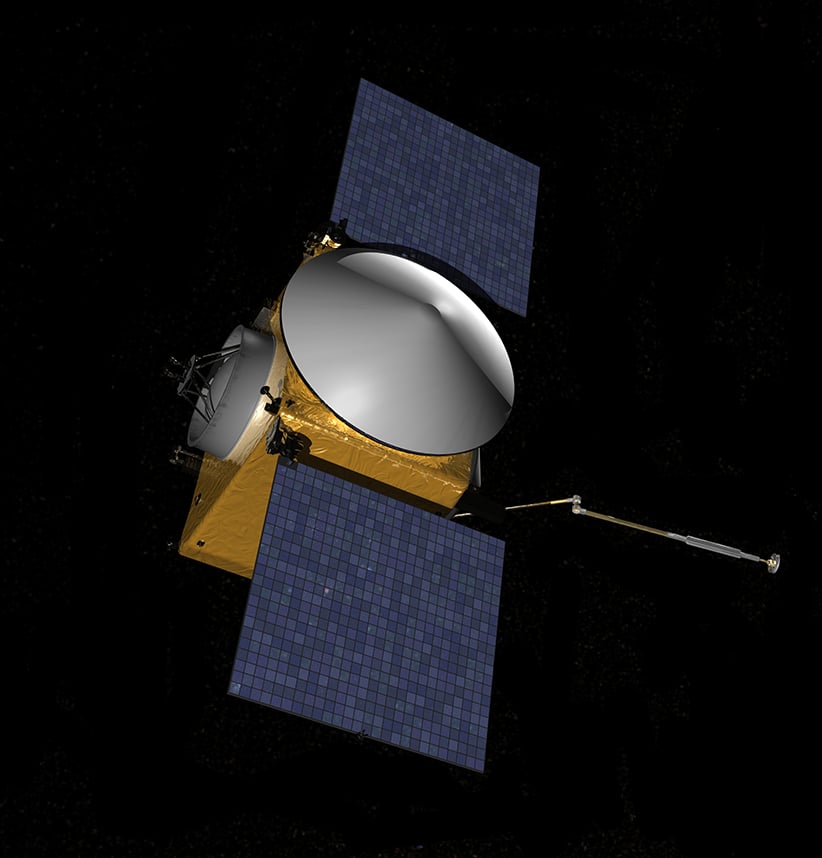 Three radar satellites of the future

The OSIRIS-REx mission, to be launched in late 2016, aims to study the asteroid Bennu by collecting samples of its surface (without landing on the asteroid) and bringing them back to Earth. Not much is known for certain about the asteroid. It was discovered in 1999 and subsequently named after the Egyptian mythological bird by a nine-year-old who won a name-that-asteroid competition.

Canadian firms MDA and Optec will contribute to the mission by manufacturing, assembling and testing the OSIRIS-REx Laser Altimeter, which will create 3D maps of Bennu to help determine where to collect the sample. In return, the Canadian Space Agency will own four per cent of the returned sample, giving Canadian scientists direct access to an asteroid—a first. 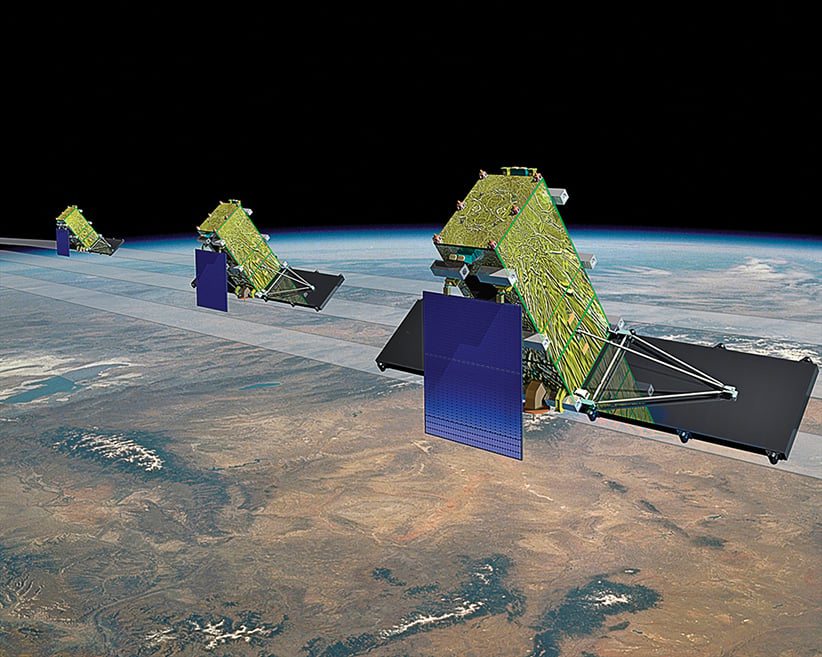 Canada’s next generation of observation radar satellites will come by way of the Radarsat Constellation Mission. Set to launch in 2018, the three-satellite configuration built by Richmond, B.C.-based space technology firm MDA will assist with maritime surveillance, disaster management and ecosystem monitoring. The satellite constellation will also play a role in helping map the Arctic and its resources. 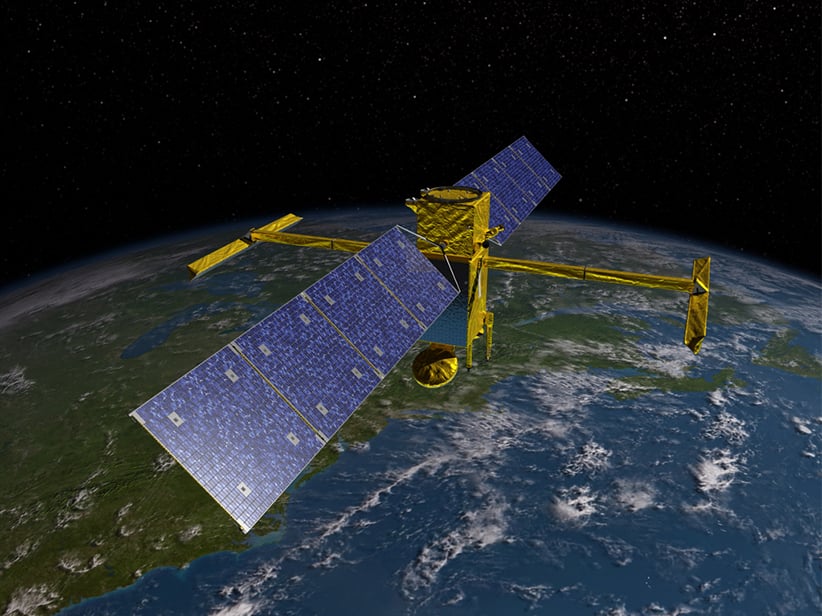 Scheduled to launch in 2020, the Surface Water and Ocean Topography (SWOT) mission will be the first global survey of Earth’s surface water. The globe is 71 per cent water; we need to get a good look at all of it.

The international mission is spearheaded by NASA and the French Space Agency, but CPI Canada, based in Georgetown, Ont., will manufacture a satellite component called the Extended Interaction Klystron, which will generate radar pulses to gather information from the surface. SWOT will measure ocean surfaces at a resolution 10 times higher than what current space systems offer, allowing scientists to study how heat and carbon are exchanged between the oceans and the atmosphere.

Currently, only 15 per cent of Earth’s lakes are measured from space, while precise measurements for northern Canada’s rivers and lakes largely don’t exist. Canada has more than two million lakes and SWOT will inventory more than a million of them, not to mention the discharge of all our major rivers. The results will help allow us to prepare for potential droughts, and better manage what might be Canada’s most important resource.

Sometimes a search-and-rescue operation could use more eyes in the sky. As part of a $4.7-million contract from the Canadian Department of National Defence, Com Dev designed and developed the Medium Earth Orbit Search and Rescue (MEOSAR) space-born transceivers. Flying on next-generation GPS satellites, MEOSAR seeks out 406-MHz distress signals that might come from downed aircraft, ships calling for help or personal locator beacons, and then quickly relay accurate location data.

This July, debris from a Russian satellite came so close to hitting the International Space Station that those on board the ISS hurried inside the Soyuz escape capsule as a precaution. When a satellite suddenly conks out and becomes inactive while floating in orbit, someone should really clean that up.

Canadian space technology firm MDA has conducted multiple studies on how to capture and deorbit a dead satellite as part of ESA’s Clean Space initiative. It’s now working on a solution for the controlled deorbit of Envisat, an observation satellite that stopped communicating back in 2012.

Similarly, NASA and the CSA are collaborating on the Robotic Refuelling Mission (RRM) using Dextre, the Canadian-built robotic handyman, to try out techniques for servicing and refuelling satellites in orbit. Ideally, future robots will repair, refuel and reposition satellites in orbit—instead of letting the satellites drift aimlessly in space.

Just as people who are Earth-bound prefer faster Internet speeds, MDA is currently working on the Ka band data relay terminal flight model—to go with the ESA Columbus module of the International Space Station—which will bring a higher bandwidth for faster delivery of scientific data and HD video imagery between ground stations and the ISS. 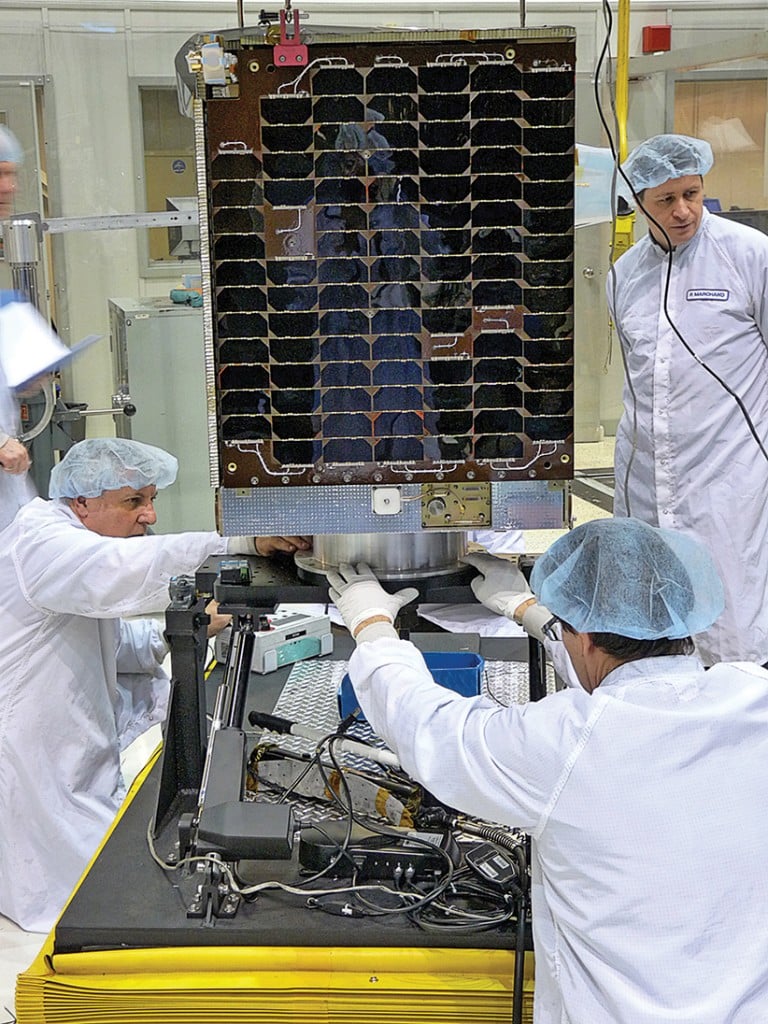 The Earth’s magnetic field is the subject of considerable research and scientific debate. A huge bubble of sorts, the field protects us from solar radiation and cosmic rays. The shield that has long allowed Earth to thrive, however, is weakening and some scientists are concerned about devastating results if it were to collapse. The European Space Agency’s SWARM mission will study Earth’s magnetic field using three satellites flying in formation. At the front of each satellite will be the Canadian Electric Field Instrument (CEFI), designed and built by Com Dev, which will be the first 3D ionospheric (upper atmosphere) imager in orbit. 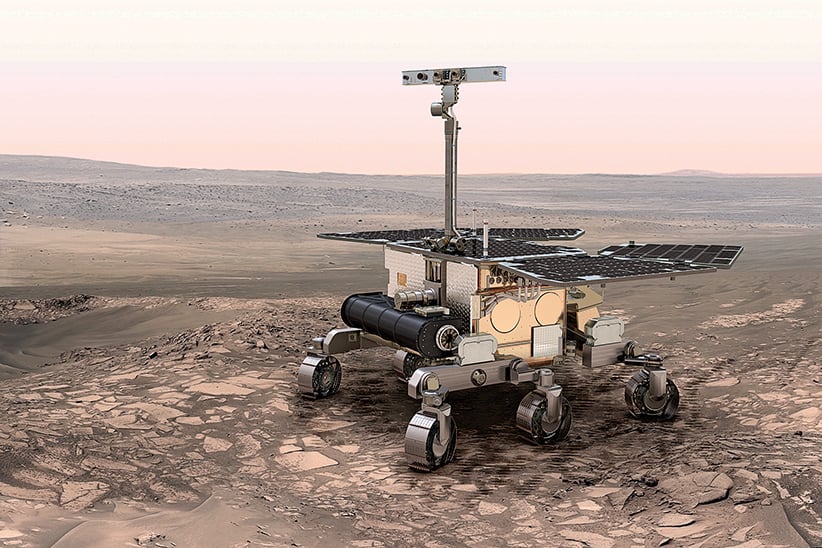 If there is (or was) life on Mars, the ExoMars Rover will see it through the eyes of a Canadian camera. Neptec Design Group, based in Ottawa, is designing and building navigation cameras that can perform at temperatures ranging from -120˚ C to 40˚ C in order to withstand the Martian climate when the European Space Agency’s rover mission gets under way in 2018. 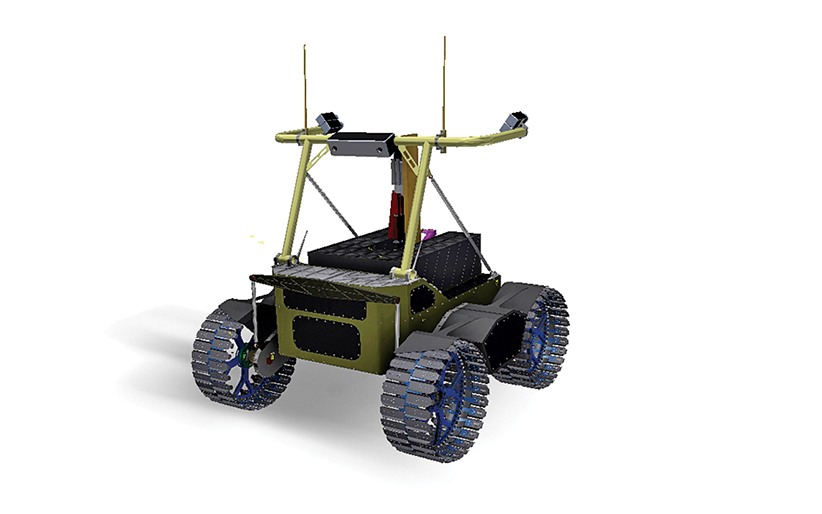 LRPDP, a lander and rover set for the Moon. (ODG employees prefer to call it LRD-VADR, though.) NASA

NASA wants to put a lander and rover in the South Pole area of the moon for its Resource Prospector Mission to see how much water is there, as well as its form, concentration and depth. Ontario Drive and Gear (ODG), a leading company in lunar rovers, is designing one that will be able to do just that. Officially known as the Lunar Rover Platform and Drivetrain Prototype (LRPDP), ODG employees prefer to call it the Lunar Rover Drivetrain—Vacuum and Dust Rated. “If you spell that out, it says ‘LRD-VADR’ (Lord Vader),” says ODG’s chief technology officer Peter Visscher. “We’re kind of nerds around here.” As with many of ODG’s rovers, some testing is done in Hawaii. “There’s a mountain there where the terrain in quite similar to the moon and to Mars,” Visscher adds. “It helps expose the weakness of your design.” And, in a first for ODG rovers, LRD-VADR will also undergo thermal-vac testing to see if it’s compatible with NASA’s mission. It will be designed, built and delivered before April 2016.

The M3MSat (Maritime Monitoring and Messaging Micro-Satellite) is designed to keep an eye on Canada’s waters from space. Built by Com Dev for the Canadian Department of Defence and Canadian Space Agency, M3MSat will orbit Earth 10 times a day. The micro-satellite identifies vessels, including their direction and speed, to make sure they’re navigating safely (and legally) in our waters.

Think of it as part of an astronaut’s future uniform. Astroskin is a smart shirt and headband fitted with sensors to monitor an astronaut’s vital signs such as blood pressure, blood oxygen levels, skin temperature, heart and breathing rate. The autonomous medical monitoring system, developed for the Canadian Space Agency by Montreal-based Carré Technologies, can also track sleep quality and activity levels, all of which can then be communicated via an on-orbit server to the crew medical officer in space as well via the mission control server to experts—like a surgeon or strength and conditioning specialist—back on Earth. Though it was designed with astronauts in mind, Astroskin’s functions can easily be put to good use on Earth, be it for sports performance or for checking in on those living in remote areas of land, far from any doctor.