A bumblebee's work is never done. Next: saving the environment

Harnessing the hardworking bumblebee could boost crop yields, cut down on pesticides, and maybe even save honeybees, too 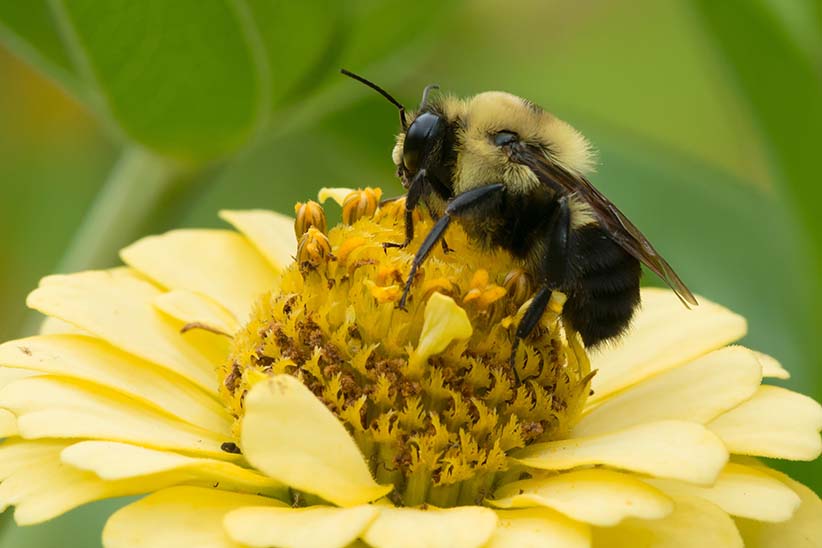 Bumblebees are among nature’s hardest workers, and their job description is about to expand. A Canadian agri-tech company plans to use the insects to spread organic pesticide on food crops. “A bumblebee will carry 100 per cent of its body weight in nectar or pollen, so it’s a very good transporter of product,” says Michael Collinson, CEO of Bee Vectoring Technology (BVT), based in Mississauga, Ont., where its first manufacturing and development facility just opened. “So we use them as our air force.”

Commercial beehives are placed among crops during blooming season, each containing up to 300 bumblebees. Every hive is fitted with small trays made by BVT that are filled with a powder containing the fungus clonostachys rosea, which is found in soil.

“Everyone goes, ‘Fungus? Not a good thing.’ But this is a beneficial fungus. Its [purpose] is to block disease,” says Collinson, who co-founded the company with three Canadian agriculture scientists in 2012, after 20 years of research and development.

The bumblebees walk through the powder, which sticks to their legs, and then leave the hive to pollinate the surrounding plants. Each time a bumblebee lands on a flower to collect nectar or pollen, it unwittingly leaves behind organic pesticide.

The company is doing demonstrations for farmers in the United States and Canada now, and plans to roll out the process commercially next year. Collinson says the process of “bee vectoring” will work on any blooming crop, including berries, tomatoes, peppers, almonds and sunflowers.

BVT’s system was recently featured in New Scientist, where biologists balanced praise with caution about whether commercial bumblebees should be used in the wild because they carry pathogens that may be transmitted to native plants or pollinators. The company, says Collinson, is “very cautious. Our business is bees. We need these guys to fly for us.”

The hope is that bee vectoring will improve crop quality and yields by reducing disease. And because the pesticide is delivered directly to each plant, the negative environmental impact is much less than with conventional spraying, where most of the pesticide winds up on the ground and eventually as run-off.

There may be one more unexpected benefit: The bumblebee may, in effect, help save its relative, the honeybee, which has become endangered partly because of exposure to controversial pesticides called neonicotinoids.

Collinson is discreet about forecasting any bonus effect, but the potential exists: “We do know [neonicotinoids] cause harm to bees,” he says. “The more we can reduce [them] the better.” For business. And perhaps for all bees.