Bill Gates: 'Let’s science the expletive-expletive out of this.'

In predicting an imminent clean energy miracle, Bill Gates echoed the famous line from the movie 'The Martian'—a new rallying cry for science and progress 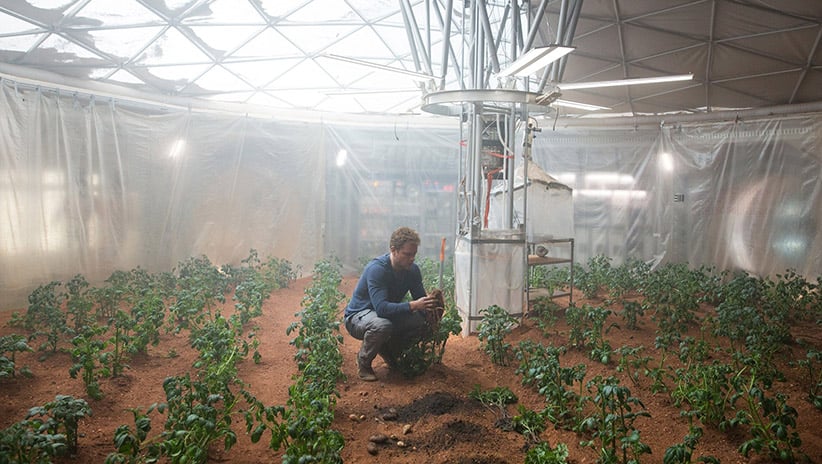 The Earth needs an energy miracle, says Bill Gates. Speaking at an event this week for his charity, the Bill and Melinda Gates Foundation, the Microsoft founder said a way must be found to deliver electricity to the 20 per cent of the world that currently lives without it, all while cutting our carbon emissions down to zero. The exact nature of that miracle is impossible to know at this point, but he believes it will arrive within the next 15 years. “Let’s science the expletive-expletive out of this,” Gates said.

Of course, that’s not how the quote, made famous in the 2015 blockbuster The Martian—one of Gates’s favourite movies—actually goes. When Matt Damon’s character, NASA astronaut Mark Watney, is left stranded on Mars, he doesn’t resign himself to death. Instead he taps his training in botany to grow food on the Red Planet. How? “I’m going to have to science the s–t out of this,” he says.

In his own stuffy, sanitized way, Gates tapped into what’s become the rallying cry for scientific advancement, innovation and technological progress in the modern era.

My favorite line in "The Martian" trailer, uttered by Matt Damon, is “I’m going to have to science the shit out of this.”

Away from the movie screen, Earth too has limited resources—not to mention problems with climate change, pollution and a host of public health issues. “No politician, military general, basketball star or reality TV star is going to save us. It’s going to come down to scientists and engineers who fix it,” says Lane Baker, an associate professor of chemistry at Indiana University. “If you think about Mark Watney sitting on Mars with limited resources, that strikes me as what scientists have to deal with today.”

After watching the movie, Baker quickly put the science quote on his university webpage. Others have put it on T-shirts and it’s become an Internet meme. “The Martian was a version of Apollo 13 on steroids,” Baker says. “It made science cool.”

In 1961, U.S. president John F. Kennedy vowed his nation would land a man on the moon before the end of the decade. Neil Armstrong’s “one small step for man, one giant leap for mankind” arrived in the summer of 1969.

Over time, “moonshot” has come to represent ambitious scientific undertakings. Google has a “moonshot” factory in the form of Google X, where it develops projects like its driverless car or bringing Internet to all corners of the Earth via a network of balloons. And when Joe Biden’s son, Beau, died of brain cancer last spring, the U.S. vice-president said: “I believe we need a moonshot in this country to cure cancer.”

Related: The merits of moonshot thinking

But “moonshot” is a term from the 1960s. To “science the s–t” out of something, on the other hand, is a rallying cry for Millennials and younger generations. “Children watching Mark Watney ‘science the s–t’ out of his problems are the ones who will form our next generation of astronauts, scientists, engineers, mathematicians, and general problem-solvers,” wrote Kara Morgan, a Penn State University aerospace engineering student in a review of the movie.

In the 2016 annual letter from the Bill and Melinda Gates Foundation, published Monday, the power couple summed up that the reason life gets better—”not for everyone all the time, but for most people most of the time”—is access to energy. When humans started using coal in the 1800s, they explain, things progressed much faster until we had fridges, elevators, skyscrapers, planes, air conditioning, modern medicine, moon landings—and, yes, Matt Damon movies.

Yet more than a billion people still live without access to energy that can power homes, hospitals or factories. Melinda, in the margins of the annual letter, echoes how they plan to address this: “What Bill’s saying is ‘We’re going to have to science the $#!% out of this.’ ”