Before Canada gets too smug about its openness to science, it's worth remembering our own history of being on the wrong side of scientific thinking 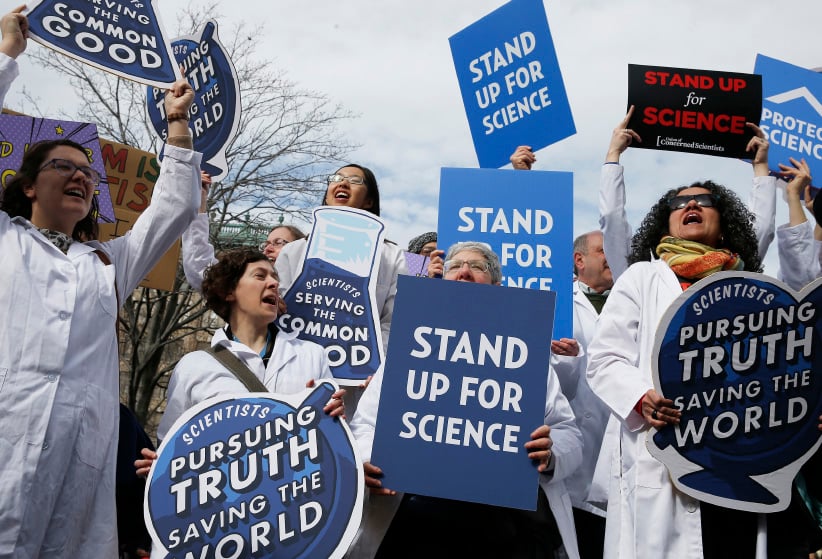 Scientists, science advocates and community members gather in Copley Square in Boston on Feb. 19, 2017 for a Rally to Stand up for Science, a call to fight against President Trumps perceived efforts to discredit science and climate research, and to dismantle scientific institutions in the government. (Jessica Rinaldi/The Boston Globe/Getty Images)

Most Canadians planning to show up at March for Science protests this weekend probably consider their participation more about solidarity with American scientists under fire than anything we need to be worried about on the home front.

After all, we the North have recently emerged as heroes. As funding cuts and junk science advocates threaten to restore the dark ages to U. S. research labs, Canadians are volunteering time and server space to preserve vulnerable data, a phenomenon that was even recently featured on the Daily Show. Between that and the recent changes in immigration policy that has Silicon Valley looking at opening up branch offices here and this year’s surge in university applications from foreign students, everything’s coming up Canada.

Attracting global talent is obviously something we welcome, alongside our new role as a seed bank, where science goes for safekeeping while the United States flirts with the erosion of food and drug safety research, vaccination science and, most recently, a scientific racism revival. We’ve seen this in casual remarks over Trump family genes and Iowa representative Steve King’s tweets arguing that we can’t “rebuild civilization” with “other people’s babies.” To top this all off, Charles Murray, author of the The Bell Curve, the 1994 book that advanced theories about racial difference and intelligence, is back in the news, with student protests erupting on campuses where he’s been scheduled to give talks.

Before we start feeling too smug, though, it’s worth remembering the Canadian contribution to Murray’s controversial book, since The Bell Curve relied heavily on studies conducted by J. Philippe Rushton, a University of Western Ontario professor who became a household name in 1989 after publishing the paper, “Evolutionary Biology and Hereditable Traits.” Rushton argued that people of East Asian descent had evolved to have bigger brains, higher IQs and smaller penises than those of African descent, who were, thanks to their genetic destiny, prone to crime and promiscuity. He was resoundingly attacked by people such as David Suzuki and the editorial board of the Toronto Star, which ran a cartoon depiction Rushton as a Ku Klux Klan member.

Although it was a high-profile story that led to conversations about academic freedom, public funding and scientific bias, Rushton’s science has largely been treated as an anomaly. In fact, it came at the tail end of a long legacy of scientific racism that informed immigration, welfare and mental health policy in Canada throughout the 20th century, when eugenics was taken seriously.

The bastard offspring of the theory of evolution, eugenics was a Victorian theory fleshed out by one Francis Galton, who argued that certain traits, most importantly intelligence, ran in the family. An uncharitable reading of this might lead someone to believe that Galton, who was Charles Darwin’s half-cousin, was desperately trying to prove he was just as smart as his famous relative. Although his studies were highly subjective, they were well-received in Europe and North America. Canada, which was plagued by anxieties about the degeneration of society, was particularly receptive to ideas about how to build civilization without other people’s babies.

One of Canada’s most famous eugenicists was Toronto’s Charles Kirk Clarke, a mental health practitioner who worked at 999 Queen West (now known as the Centre for Addiction and Mental Health) around the turn of the century and became a central figure in establishing national health and immigration policy. “Some Settlers Canada Can Do Without,” an article that ran in Maclean’s in 1908, cited Clarke’s statistics that suggested a disproportionate number of inmates in asylums and jails were “foreign-born,” and that, to combat this, “mental defectives” needed to be screened out in the immigration process. In particular, immigrants from Asia and the “squalid and submerged communities in the Old Country” needed to be stopped at the border.

Anti-immigration sentiment strengthened after the First World War for a few reasons, including a simple loss of faith in the sense of progress after the brutal conflict. There was also the publication of Madison Grant’s The Passing of the Great Race that advanced the theory of superior genetic stock, along with widespread concern that much good, white, Canadian stock had been sacrificed in the war. After several years of hot debate over the perils of degeneration, Alberta responded with a sexual sterilization program that targeted people with mental “defects” that included low intelligence, promiscuity, criminal tendencies and alcoholism, all of which were thought to be inherited traits.

By the time it was repealed in 1972, over 4,000 people were sterilized, generally without consent or, in fact, even their knowledge. It was common for victims to be told they’d merely had an appendectomy. Alberta’s was the worst, but British Columbia had a 40-year sterilization program, too. Ontario flirted with it in the 1930s, where arguments fell along religious and cultural lines and many saw it for what it was, essentially, a genocidal tool. It’s only now being acknowledged that, in B.C. and Alberta, disproportionate numbers of First Nations and Metis people were deemed “unfit.”

Since these atrocities have stopped, the majority of scientists and cultural historians have come to realize that tests that determined intelligence, the main measure for mental fitness, were wildly culturally biased. The single most compelling argument for this is to be found in Stephen Jay Gould’s The Mismeasure of Man, which unpacks all the faulty premises and bad science that props up eugenics, much of which were traps that Rushton fell into.

That lapse in scientific judgment led to bad policies and thousands of scarred lives. It’s hardly the only example of faulty science policy in Canada. Ten years ago, for example, the Conservative government turned its back on science, declared the Kyoto Accord a socialist plot and pulled the funding from climate research. Canada’s own little dark age may, ultimately, be more consequential, since we lost a decade of possible damage control.

So, it’s great to seize the day and embrace our role as a modern science superhero. Just let’s be careful to acknowledge that we, too, have a tendency to be on the wrong side of science—recently, in fact. As William Faulkner said: “The past isn’t over; It isn’t even past.”